PS>Attack combines some of the best projects in the infosec powershell community into a self contained custom PowerShell console. It's designed to make it easy to use PowerShell offensively and to evade antivirus and Incident Response teams. It does this with in a couple of ways.

PS>Attack contains over 100 commands for Privilege Escalation, Recon and Data Exfilitration. It does this by including the following modules and commands:

It also comes bundled with get-attack, a command that allows you to search through the included commands and find the attack that you're looking for. 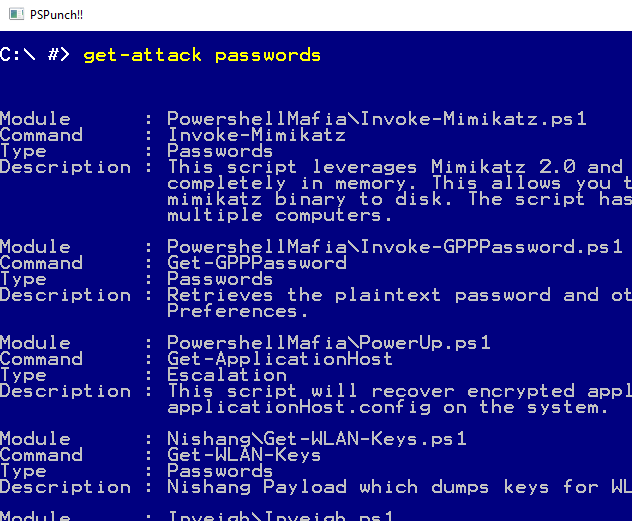 PS>Attack is available as a pre-compiled binary on the releases tab. No setup or install is required, you can just download it and run.

Another option is to use the PS>Attack Build Tool. The build tool handles downloading PS>Attack, updating the modules to the latest versions, encrypting them with a unique key and then compiling the whole thing. The end result is a custom version of PS>Attack that has all the latest tools and a custom file signature thanks to the unique key.

Of course, you can also just clone the repo and compile the code yourself. You can use Visual Studio Community Edition to work with it and compie it.

If you have any questions or suggestions for PS>Attack, feel free to submit an issue or you can reachout on twitter or via email: jh at psattack.com

PS>Attack was inspired by and benefits from a lot of incredible people in the PowerShell community. Particularly mattifiestation of PowerSploit and sixdub, engima0x3 and harmj0y of Empire. Besides writing the modules and commands that give PS>Attack it's punch, their various projects have inspired a lot of my approach to this project as well as my decision to try and contribute something back to the community.

A huge thank you to Ben0xA, who's PoshSecFramework was used to figure out a lot of things about how to build a powershell console.

Thanks to danielbohannon for writing the masterpiece that is Invoke-Obfuscation. I'm glad someone is crazy enough to do the research in obfuscating PowerShell.