This is a liberally licensed procedural tree generator in c++, along with an editor HappyTree. 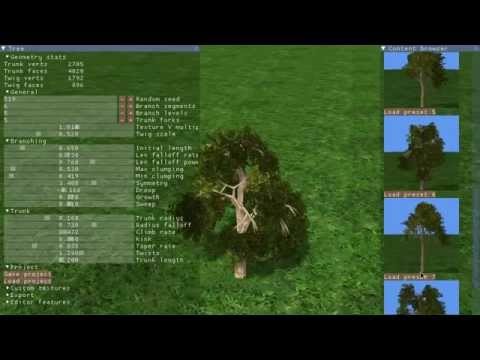 The procedural generation itself is a port from https://github.com/supereggbert/proctree.js/ see http://snappytree.com for an online demonstration of the original proctree.js (with webgl). The c++ port is several orders of magnitude faster than the original, and also fixes the UV mapping.

All of the textures are CC0 / public domain material (primarily, if not completely, by nobiax.deviantart.com). The additional textures do let you make more varieties of trees though; the base package only comes with one trunk and twig texture.

The happytree editor requires OpenGL 3.3, but seriously, who doesn't have that?

Usage should be pretty intuitive, you can rotate the camera by dragging and zoom in and out with the mouse wheel.

I wanted a tree generator I can use to generate trees at runtime in C.

The generator itself is licensed under 3-clause BSD license (personally I'd have opted for something even more liberal, but that's what the original proctree.js used). See the source file for the actual license.

The editor's sources and support libraries are under variety of bsd and zlib liceses. See legal_notes.txt in the happytree directory for details.

The generator itself has no dependencies, and was designed to be easily plugged into whatever.

The editor (HappyTree) has a bunch of dependencies:

The ported proctree.cpp does not generate exactly the same output as the original proctree.js. This may be partially due to the different math accuracy used, but it's possible that I managed to slip a bug or two into the algorithm. (Feel free to debug..)