*old repository* --> this is now integrated in https://github.com/javaparser/javaparser

JavaSymbolSolver has been integrated in JavaParser: development will continue there!

We will work on current issues opened here, but all new issues should be opened in the JavaParser project

A Symbol Solver for Java built on top of JavaParser from the same team of committers.

Currently the best source of documentation is in this book 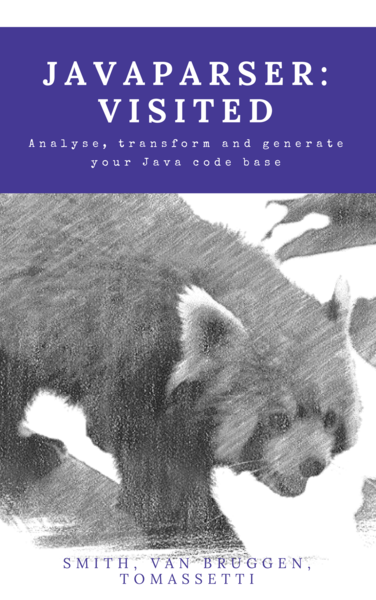 You can also read this article:

JavaParser is a parser: given a source file it recognizes the different syntatic element and produce an Abstract Syntax Tree (AST).

JavaSymbolSolver analyzes that AST and find the declarations connected to each element.

foo in the AST is just a name, JavaSymbolSolver can tell you if it refers to a parameter, a local variable, a field. It can also give you the type, tell you where the element has been defined and so on.

What can I use it for?

A Symbol Solver can associate a symbol in your code to its declaration. This is necessary to verify the type of an expression or to find the usage of a symbol (like a field or a local variable):

In the expression a + 1 a parser (like JavaParser) is not able to tell us to which definition of a we are referring to and consequently it cannot tell us the type of a. The JavaSymbolSolver is able to do so.

How can I use it? Show me some code!

Take a look at JavaParserFacade. For example you can use it to find the type of an expression:

The only configuration that it requires is part of the TypeSolver instance to pass it. A TypeSolver is the mechanism that is used to find the classes referenced in your code. For example your class could import or extend a given class and the TypeSolver will find it and build a model of it, later used to solve symbols. Basically there are four TypeSolver:

In the tests you can find an example of instantiating TypeSolvers:

We plan to write soon more examples and tutorials.

Status of the project

This project is more recent of JavaParser but it has been receiving some attention and it has been improving a lot recently.

It supports all features of Java 8 (lambdas, generic, type inference, etc.). Of course we expect some bugs to emerge from time to time but we are committed to help users solve them as soon as possible.

It has been also used in a commercial product from Coati.

This code is available under the Apache License.

We use Travis to ensure our tests are passing all the time.

The dev-files dir contains configurations for the Eclipse and the IDEA formatters (I took them from the JavaParser project, thanks guys!).

The project is structured in this way:

A more detailed description of the architecture of the project is available in Design.MD

We suggest that you use the local gradle wrapper within java-symbol-solver to execute gradle tasks. If you're working on a Linux or Mac system, this is ./gradlew in the root directory of java-symbol-solver. On Windows, it's gradlew.bat. When executing gradle tasks via your IDE, make sure to configure your IDE to also use this wrapper. If you use intelliJ, you need the "Use default Gradle wrapper" option in the IntelliJ Gradle settings.

The following tasks are most relevant:

In case you haven't worked with Gradle before, one thing of note is that Gradle will only perform tasks that are still relevant. Let's say you have subprojects foo and bar and you had previously compiled those. If you then make changes in foo and compile both again, only foo will be compiled. You'll see in the Gradle output that the compile task of bar is marked as UP-TO-DATE.

I would absolutely love every possible kind of contributions: if you have questions, ideas, need help or want to propose a change just open an issue. Pull-requests are greatly appreciated.

The project has been created by Federico Tomassetti and it is currently co-maintained by the JavaParser team. Core contributors are currently Malte Langkabel and Panayiotis Pastos

*old repository* --> this is now integrated in https://github.com/javaparser/javaparser