Syd is a cross-platform instrument editor and software synthesizer by Jim Bumgardner, originally developed in 1997, in C++. The current version of Syd has a patching interface in Java, and a command-line renderer written in C++. 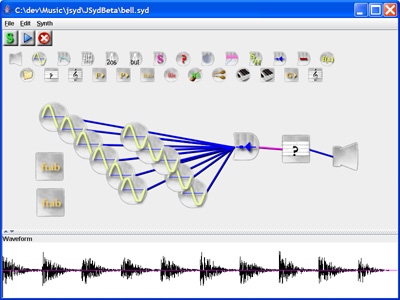 Cyd has a graphical "patch cord" interface, and an elegant method for producing large-scale and recursively polyphonic patches. It is particularly suitable for teaching computer music.

The most notable use of Syd to date is in Bumgardner's "Whitney Music Box", which can be found at http://wheelof.com/whitney/ Syd was used for all the variations using harmonics and non-standard tunings.

The patch used to render the Whitney Music Box is quite elegant in Syd, making use of it's unusual method of generating polyphony with a single "score unit".

Syd has also been used in introductory computer music classes at a few schools.

1997 Original Version of Syd (Written in C++ on the Macintosh)