n-cube is a Rules Engine, Decision Table, Decision Tree, Templating Engine, and Enterprise Spreadsheet, built as a hyper-space. The Domain Specific Language (DSL) for rules is Groovy. To include in your project:

The image below is a Visual Summary of the main capabilities of n-cube. 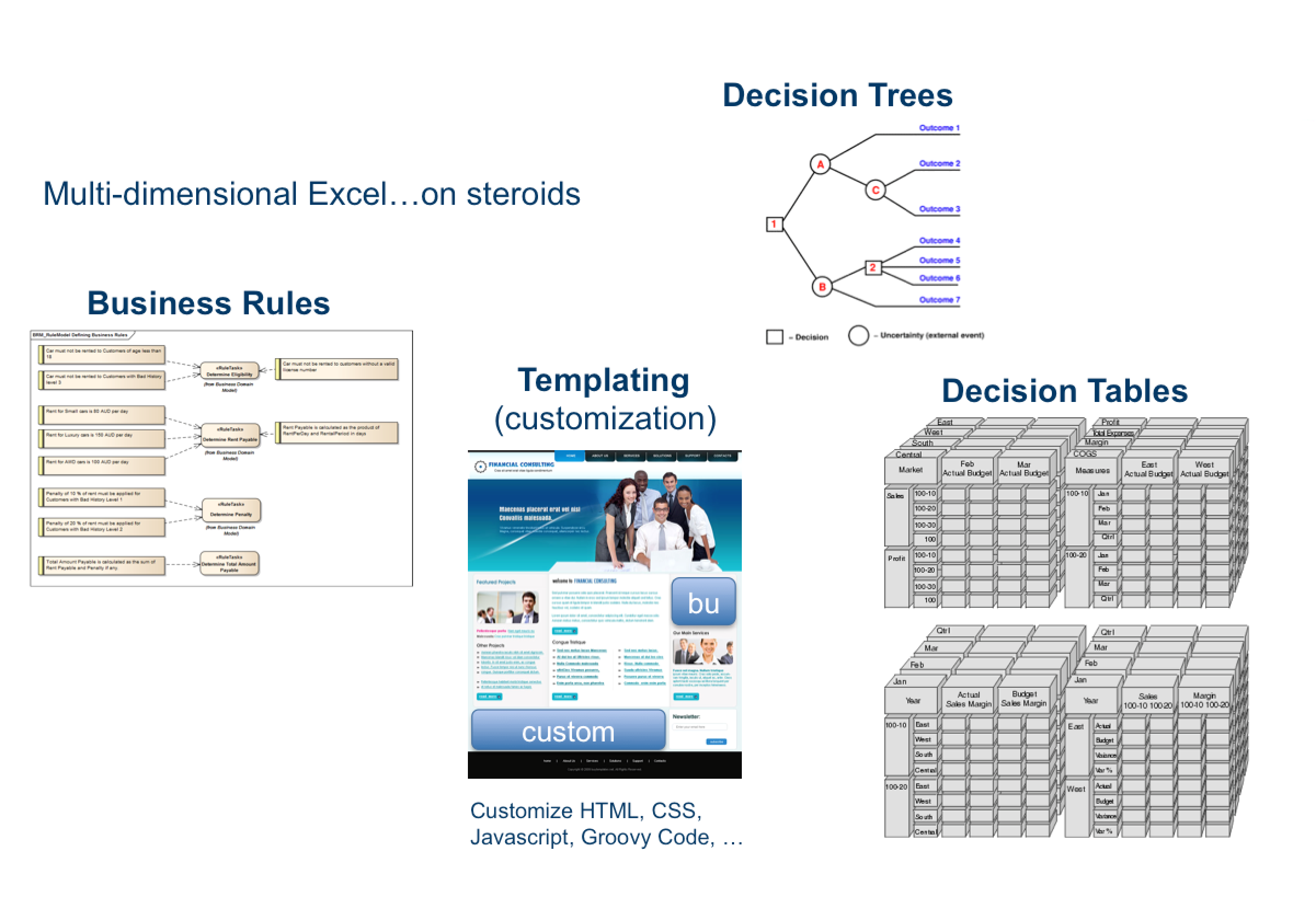 What are the components of an n-cube? An n-cube has a set of axes (plural of axis), each of which adds a dimension. For example, in Excel, there are two axes, one axis numbered [rows] and one lettered [columns]. Within n-cube, each axis has a name, like 'State', 'Date', 'year', 'Gender', 'Month', etc.

Each axis contains columns. In excel, the columns are just numbers and letters. In n-cube, the columns can be a set of values like the months of a year, years, age ranges, price ranges, dates, states, coordinates (2D, 3D, lat/lon), expressions, and so on.

A column can be a simple data type like a String, Number, Date, but it can also represent a Range [low, hi) as well as a Set (a combination of discrete values and ranges). A column can also contain expressions or any class that implements Java's Comparable interface. It is these columns that input coordinates match (bind to).

Finally, there are cells. In a spreadsheet, you have a row and column, like B25 to represent a cell. In n-cube, a cell is similarly represented by a coordinate. A Java (or Groovy) Map is used, where the key is the name of an axis, and the value is the value that will 'bind' or match a column on the axis. If a value does not match any column on an axis, you have the option of adding a 'default' column to the axis. Here's an example [age:24, state:'CA', date:'2012/12/17']. The format given here for a Map is the declarative form used by Groovy. In Java, that would be map.put("age", 24), map.put("state", "CA") and so on. Because the Groovy form is much shorter, it will be used from here on out to represent coordinate maps. Because a Map is used as the input coordinate, you can have as many dimensions (keys) as desired.

Expressions can be a simple as: input.age > 17, which would return true if the 'age' key on the input coordinate (map) was greater than 17, or false if not. Expressions can be as complex as an entire Class with multiple methods (that can use other classes). Expressions are written in Groovy. See http://www.groovy-lang.org/. Groovy was chosen because it is essentially Java (has Java syntax, compiles and runs at Java speed), but has many syntactic short-cuts that result in shorter code as compared to Java.

A cell in an n-cube can reference another cell within the same n-cube, like you might do in Excel. For example, you may have a formula in Excel like this: =b25 + b32 * 2, stored say in A1. The value for A1 would be computed using the formula stored in A1. N-cube allows these same capabilities, plus more (code / business logic). A cell could have an if statement in it, a for-loop, switch statement, reference other cells within the same cube, or it can reference cells within different n-cubes. The referenced cell can then be another formula, reference other cells, and so on.

When used as a rule engine, at least one axis within the n-cube is marked as as 'Rule' axis type. In that case, each column is written as a condition (in Groovy). For example, input.age < 18. When a Rules n-cube is executed, each condition on the Rule axis is evaluated. If the value is true (as how Groovy considers truth: http://www.groovy-lang.org/semantics.html#Groovy-Truth), then the associated cell is executed. If no conditions are executed, and there is a default column on the rule axis, then the statement associated to the default column is executed.

To kick off the Rule execution, ncube.getCell(coord, output) is called. The conditions along the Rule axis are executed linearly, in order. Condition columns can reference values passed in on the input map (using input.age, input.state, etc.) as well as cells within other cubes.

The input coordinate map is referenced through the variable input. The output map is referenced through the variable output. Both can be referenced in the condition as well as in the cell (for expression, method, and template cells). Typically, when used in rule mode, as conditions fire, the corresponding cell that is executed writes something to the output map. For example in an pricing application, state =='CA' || state == 'TX' as the condition, the corresponding cell may have output.productCost *= 1.07. The tax condition, for example.

The condition column can contain multiple statements. Think of it like a method body. The value of the last statement executed is evaluated as the condition. Your code has access to the input coordinate (map), output map, and the n-cube in which the code resides. All Java code libraries and Groovy can be accessed as well. For example, println from Groovy can be added to the conditions for debugging (as well as added to the executed cell). The Groovy expression (or methods) in the executed cell can write multiple outputs to the output map.

As each condition on the Rule axis is executed, the n-cube rule engine writes information to a "_rule" entry into the output map. This _rule entry is a Map which includes the condition name executed, the condition expression executed, and other useful information. This allows you to evaluate the rule exection while developing the rules, to see rules fired. This Map can be cast to RuleInfo, which has explicit APIs on it to retreive values from it, eliminating the need to know the keys.

In general, as cells execute, they write to the output map. The input coordinate could be written to as well. If it is modified, and a further n-cube is referenced, any modifications to the input coordinate will remain in place until that execution path returns. When the execution path of the rules finishes and returns, the input map is restored to it's prior condition before execution. When returning then to an outer n-cube (or the code that called ncube.getCell()), that code will see no changes to the input map. The output map will, of course, contain whatever changes were written to it.

Both condition columns and executed cells can tell the rule engine to restart execution of the conditions as well as to terminate any further conditions from being executed. This is a linear rules execution flow, and intentionally not the RETE algorithm.

Use either the Simple JSON format to create n-cubes, or the nCubeEditor to editing the pages. At the moment, there is no cloud-based editor for n-cube, so you need to set up the nCubeEditor as a web-app within a Java container like tomcat or jetty. See the sample JSON files in the test / resources directories for examples.

These are read in using the NCubeManager.getNCubeFromResource() API. You can also call ncube.fromSimpleJson(String json).