Automatically generate a RESTful API service for your legacy database. No code required!

sandman2 automagically generates a RESTful API service from your existing database, without requiring you to write a line of code. Simply point sandman2 to your database, add salt for seasoning, and voila!, a fully RESTful API service with hypermedia support starts running, ready to accept HTTP requests.

This is a big deal. It means every single database you interact with, from the SQLite database that houses your web browser's data up to your production PostgreSQL server can be endowed with a REST API and accessed programmatically, using any number of HTTP client libraries available in every language. sandman2 frees your data.

Imagine you're working for AnonymousCorp and need to access Group Y's data, which is presented to you through some horrible API or GUI. Wouldn't it be nice if you could just interact with that database through a REST API?

More than that, imagine if you could interact with the database through a REST API and no one had to write any code. Not you. Not Group Y. No one. That means no boilerplate ORM code, no database connection logic. Nothing. sandman2 can be run as a command-line tool (sandman2ctl) that just takes your database information as parameters and connects to it, introspects the schema, generates a RESTful API, and starts the server.

What Happened to Sandman (1)?

sandman, the precursor to sandman2, is no longer being maintained. sandman had almost identical functionality but had an architecture that reflected the capabilities of the underlying ORM, SQLAlchemy. As of the 0.9 release, SQLAlchemy introduced the automap construct. This fundamentally changed the way that sandman could interact with the underlying database in a way that greatly simplified things. All that was needed was the actual effort to rewrite sandman from scratch...

sandman2 has since surpassed the functionality of the original sandman and the latter should be considered deprecated/obsolete.

Install sandman2 using pip: $ pip install sandman2. This provides the script sandman2ctl, which just takes the database URI string, described here. For example, to connect to a SQLite database in the same directory you're running the script, you would run:

To connect to a PostgreSQL database, make sure you install a driver like psycopg2 using pip, then use the following connection string:

Again, see the SQLAlchemy documentation for a more comprehensive discussion of connection strings.

sandman2 supports all databases that the underlying ORM, SQLAlchemy, supports. Presently, that includes:

Here's a shot of the new look: 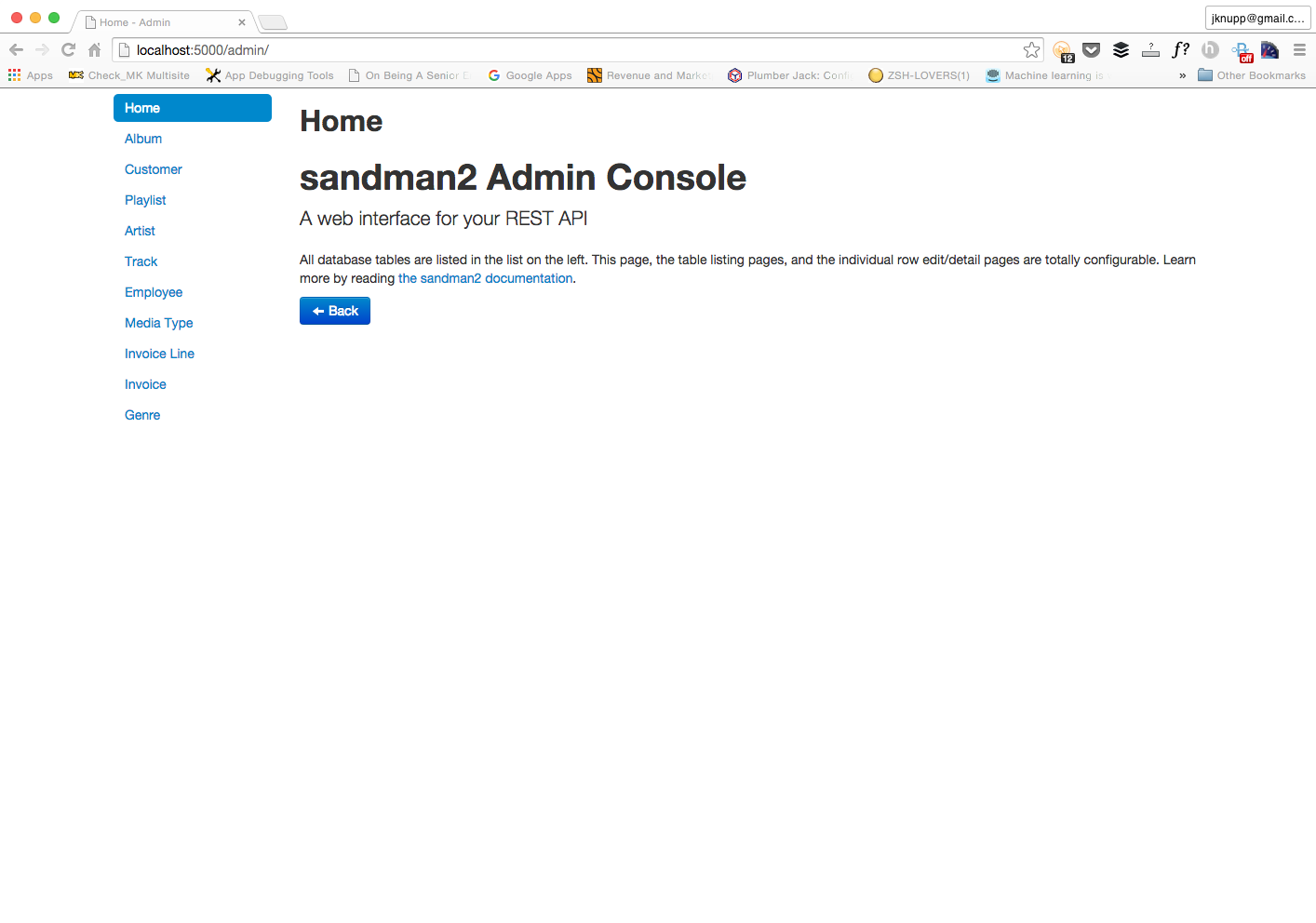 If sandman2ctl doesn't give you fine-grained enough control over your REST endpoints, or you'd like to restrict the set of tables made available via sandman2ctl, you can easily integrate sandman2 into your application. See the documentation for more info.

sandman2 has an official docker image at Docker Hub. Simply docker pull jeffknupp/sandman2 to get the latest version. It supports the most popular database engines, but not all that sandman2 currently natively supports. If you'd like to see support for your RDBMS, either add a pull request on this repo (if possible) or create a new issue with the details of your database's Python driver.

Here's how one would run sandman2 to connect to a PostgreSQL database running on one's host machine (i.e. not a remote database, which is far simpler) under Docker (on a Mac, explained below):

Note, DB_HOST=host.docker.internal is only necessary for databases that reside on the host system (and the value only works on macOS). To connect to a database on a remote machine, simply replace that value with the machine's IP or hostname.

Here are the parameters available to specify your connection information and their meaning:

Pass each value separately to the docker run command with -e <VARIABLE>=<VALUE>. Not all are required, but which ones are required differs based on your target RDBMS.

Automatically generate a RESTful API service for your legacy database. No code required!