A super-fast C++ hash table with Node.js wrapper, tested up to 1 billion keys.

MegaHash is a super-fast C++ hash table with a Node.js wrapper, capable of storing over 1 billion keys, has read/write speeds above 500,000 keys per second (depending on CPU speed and total keys in hash), and relatively low memory overhead. This module is designed primarily as a replacement for ES6 Maps, which seem to crash Node.js after about 15 million keys. However, please note that there are some caveats.

I do know of the hashtable module on NPM, and have used it in the past. The problem is, that implementation stores everything on the V8 heap, so it runs into serious performance dips with tens of millions of keys (see below). Also, it seems like the author may have abandoned it (open issues are going unanswered), and it doesn't compile on Node v12.

For performance benchmarking, we compare MegaHash to the native Node.js ES6 Map, the C++ std::unordered_map (with Node.js wrapper), and also the NPM hashtable module. All tests were run on a AWS c5.9xlarge virtual machine with Node v12.11.1 (and Node v6 for the hashtable module). Keys were varied between 1 to 9 bytes in length, and values were between 96 to 128 bytes.

Here are write speeds up to 100 million keys (higher is better): 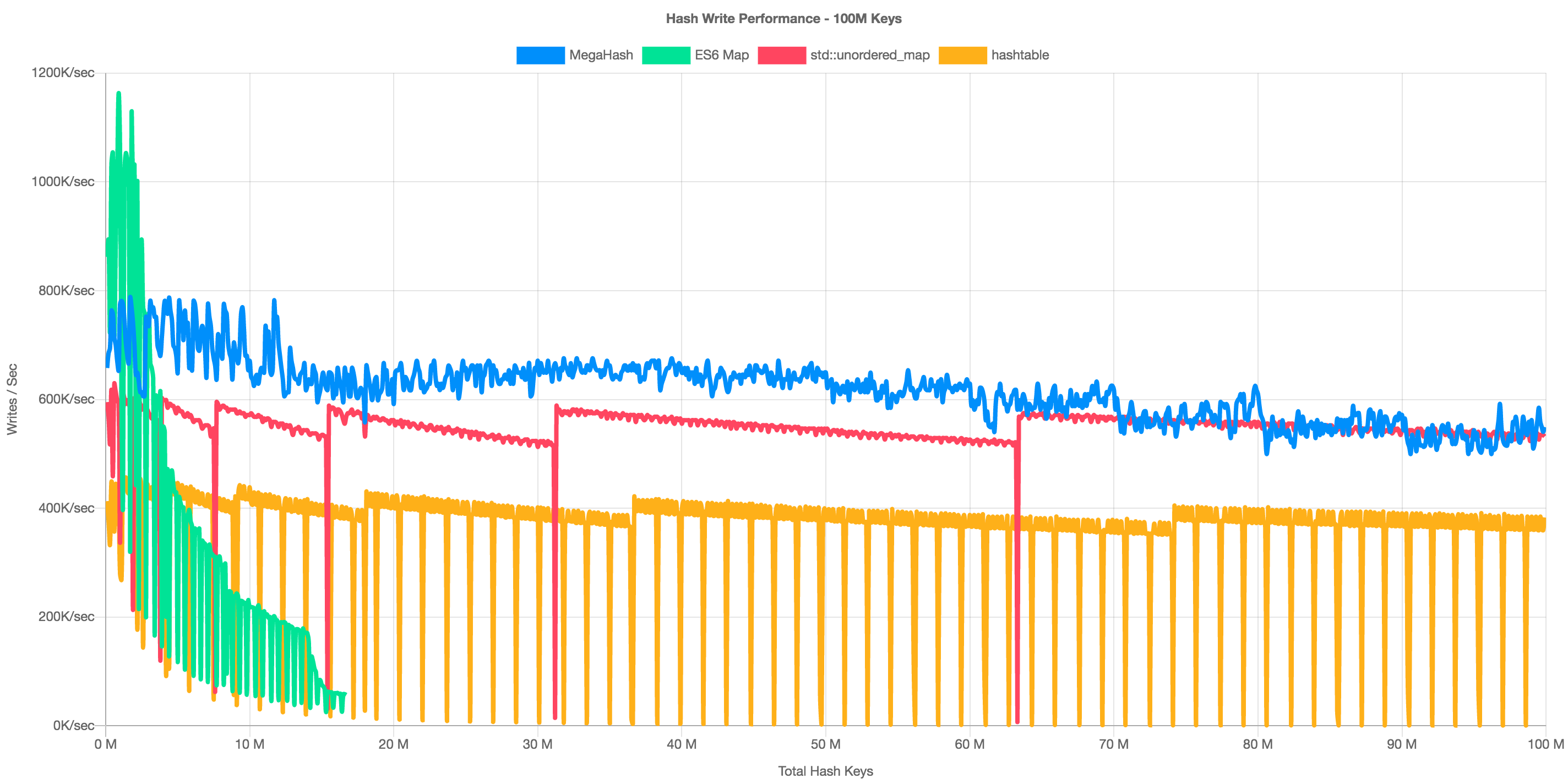 A few things to note here. First, with hash sizes under 5 million keys, the native Node.js ES6 Map absolutely blows everything else out of the water. It is lightning fast. However, as you can see, performance dips quickly thereafter, and the line stops abruptly around 15 million keys, which is where Node.js crashes. This seems like some kind of hard key limit with Maps, as it dies here every time (yes, I increased the memory with --max-old-space-size).

The NPM hashtable module made it all the way, but unfortunately has some severe performance dips, where it totally stalls out for up to a minute or more, then picks back up again. This trend continues all the way to 100M keys. The overall average was only 30,000 keys per second for this module, due to all the stalling.

The C++ std::unordered_map (with a Node.js wrapper) performs pretty well, but also suffers from occasional performance dips, presumably when it resizes its indexes (as the dips also correspond with a sharp increase in performance).

And here are random read speeds up to 100 million keys (higher is better): 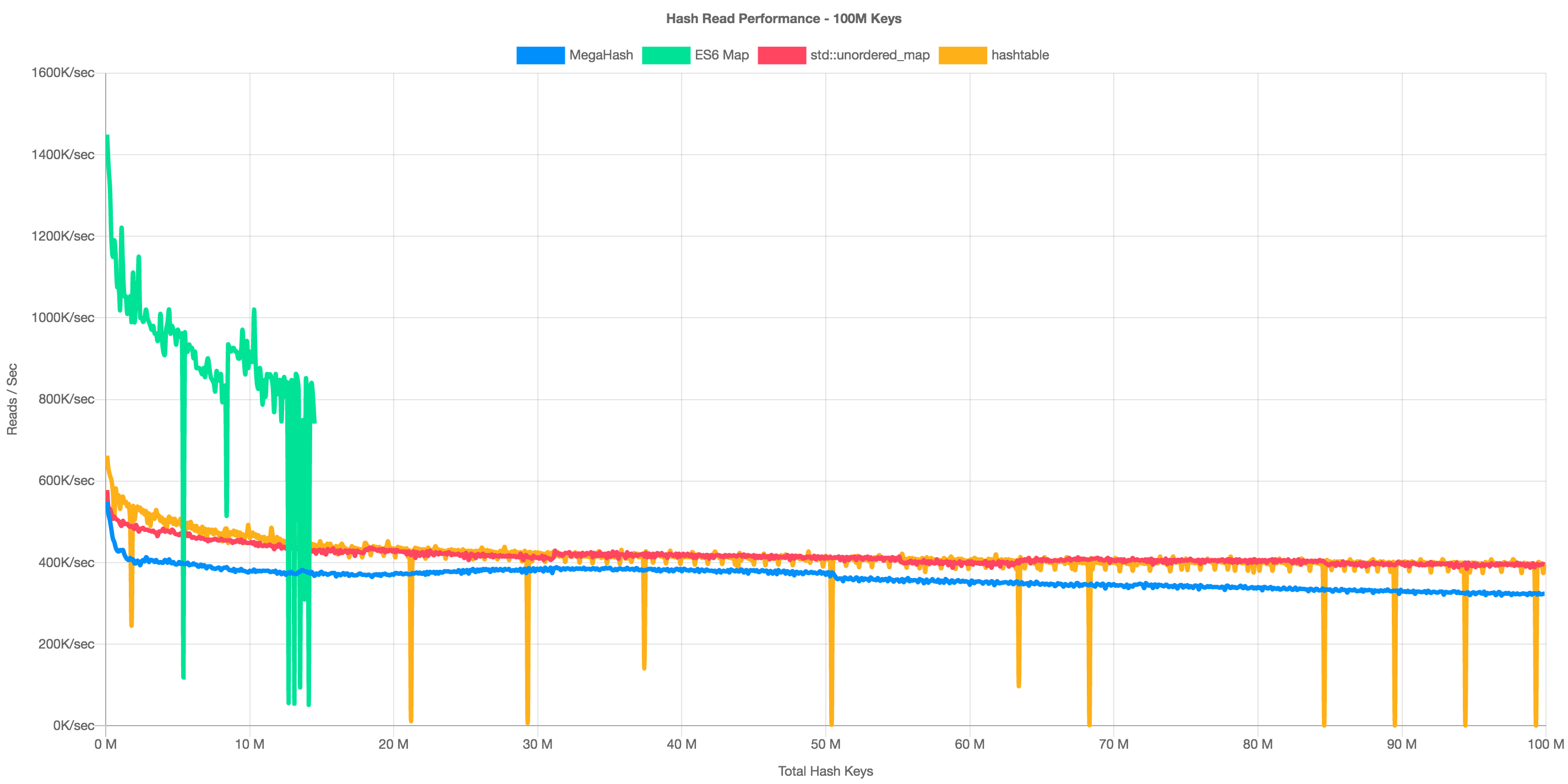 Basically the same story here with ES6 Maps. With smaller hash sizes, it is the clear winner by a mile, topping out at almost 1.5 million keys per second. But again, with hashes over 10M keys, it starts to get very wonky, intermittently stalling out, and finally hard crashes Node.js.

For reading random keys, the graph seems to indicate that hashtable comes out ahead of MegaHash. But as you can see it still has performance dips, where it drops to almost 0 keys/sec in a full on "stall", then it recovers. I suspect this is because all data is stored on the V8 heap (just a guess).

The C++ std::unordered_map performs the best overall with random reads, beating MegaHash consistently all the way to 100M keys. However, MegaHash wins in both write performance, and memory usage (see below).

Here is a look at process memory usage up to 100 million keys (lower is better): 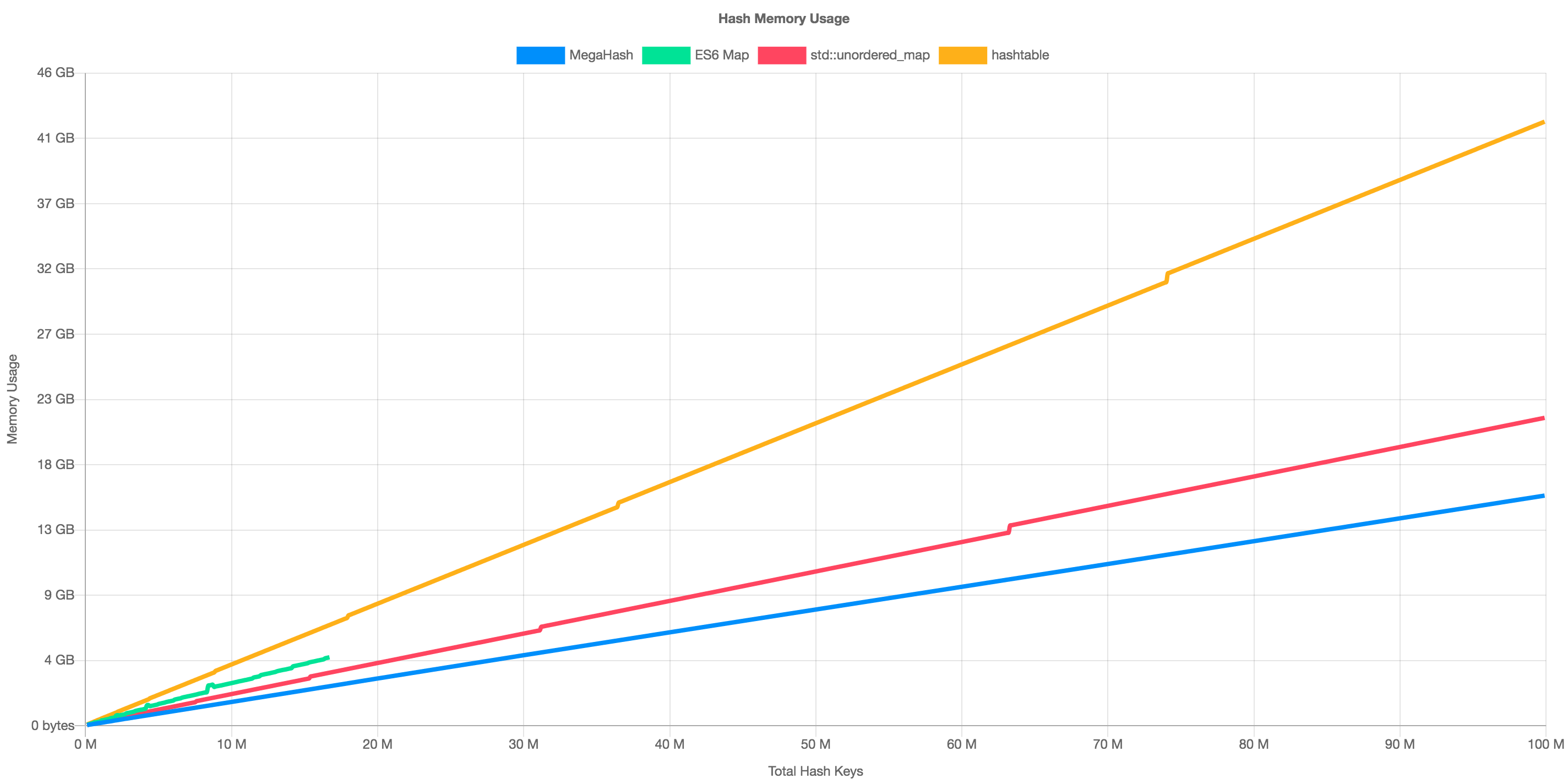 All four of the libraries were fed the exact same keys and values, and yet MegaHash seems to use the least amount of memory. This may be due to MegaHash's unique approach to indexing. All 4 processes were measured the same way, using process.memoryUsage().rss.

Pushing past 100M keys, here is a performance graph of MegaHash all the way to 1 billion keys (I rented an i3.8xlarge for this test): 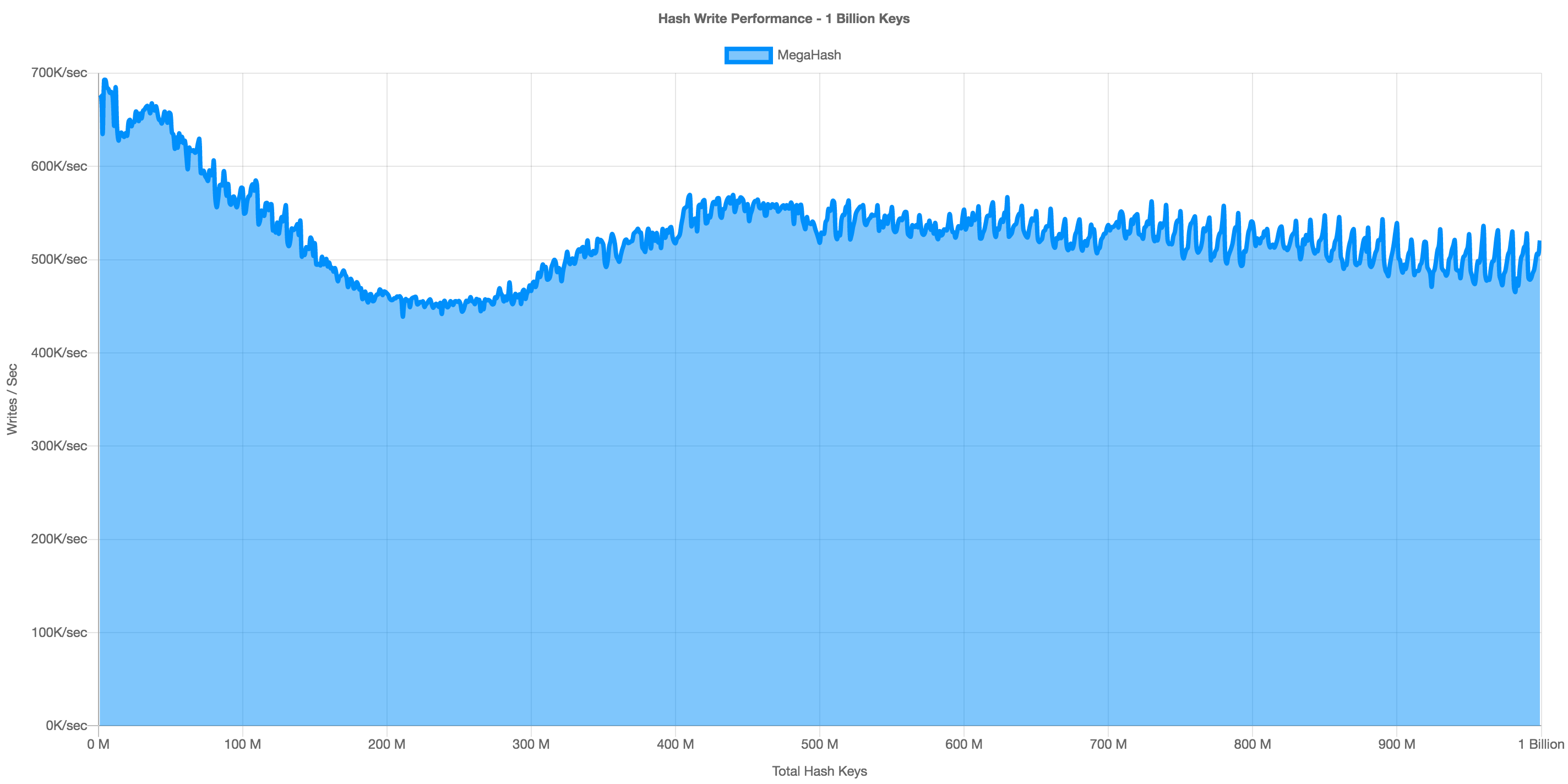 That small performance dip between 150 and 350 million keys is due to reindexing, which is an unfortunate side effect of hashing. However, it never drops below 450K writes/sec, and averages around 500K/sec. At 1 billion keys, reads/sec were about 300K/sec.

Use npm to install the module locally:

You will need a C++ compiler toolchain to build the source into a shared library:

Once you have that all setup, use require() to load MegaHash in your Node.js code:

Here is a simple example:

To add or replace a key in a hash, use the set() method. This accepts two arguments, a key and a value:

To fetch an existing value given a key, use the get() method. This accepts a single argument, the key:

The following data types are supported for values:

Buffers are the internal type used by the hash, and will give you the best performance. This is true for both keys and values, so if you can pass them in as Buffers, all the better. All other data types besides buffers are auto-converted. Example use:

It should be noted here that memory is copied when it enters and exits MegaHash from Node.js land. So if you insert a buffer and then retrieve it, you'll get a brand new buffer with a fresh copy of the data.

Strings are converted to buffers using UTF-8 encoding. This includes both keys and values. However, for values MegaHash remembers the original data type, and will reverse the conversion when getting keys, and return a proper string value to you. Example:

Keys are returned as strings when iterating using nextKey().

Object values are automatically serialized to JSON, then converted to buffers using UTF-8 encoding. The reverse procedure occurs when fetching keys, and your values will be returned as proper objects. Example:

Number values are auto-converted to double-precision floating point decimals, and stored as 64-bit buffers internally. Number keys are converted to strings, then to UTF-8 buffers which are used internally. Example:

Note that BigInts are only supported in Node 10.4.0 and up.

Booleans are internally stored as a 1-byte buffer containing 0 or 1. These are auto-converted back to Booleans when you fetch keys. Example:

You can specify null as a hash value, and it will be preserved as such. Example:

You cannot, however, use undefined as a value. Doing so will result in undefined behavior (get it?).

To delete individual keys, use the delete() method. Example:

To delete all keys, call clear() (or just delete the hash object -- it'll be garbage collected like any normal Node.js object). Example:

To iterate over keys in the hash, you can use the nextKey() method. Without an argument, this will give you the "first" key in undefined order. If you pass it the previous key, it will give you the next one, until finally undefined is returned. Example:

Please note that if new keys are added to the hash while an iteration is in progress, it may miss some keys, due to indexing (i.e. reshuffling the position of keys).

If a hash operation fails (i.e. out of memory), then set() will return 0. You can check for this and bubble up your own error. Example:

To get current statistics about the hash, including the number of keys, raw data size, and other internals, call stats(). Example:

The response object will contain the following properties:

Here is the API reference for the MegaHash instance methods:

Set or replace one key/value in the hash. Ideally both key and value are passed as Buffers, as this provides the highest performance. Most built-in data types are supported of course, but they are converted to buffers one way or the other. Example use:

The set() method actually returns a number, which will be 0, 1 or 2. They each have a different meaning:

Fetch a value given a key. Since the value data type is stored internally as a flag with the raw data, this is used to convert the buffer back to the original type when the key is fetched. So if you store a string then fetch it, it'll come back as a string. Example use:

If the key is not found, get() will return undefined.

Check if a key exists in the hash. Return true if found, false if not. This is faster than a get() as the value doesn't have to be serialized or sent over the wall between C++ and Node.js. Example use:

Delete one key/value pair from the has, given the key. Returns true if found, false if not. Example use:

Delete all keys from the hash, effectively freeing all memory (except for indexes). Example use:

Return the total number of keys currently in the hash. This is very fast, as it does not have to iterate over the keys (an internal counter is kept up to date on each set/delete). Example use:

Fetch statistics about the current hash, including the number of keys, total data size in memory, and more. The return value is a native Node.js object with several properties populated. Example use:

See Hash Stats for more details about these properties.

MegaHash uses separate chaining to store data, which is a combination of an index and a linked list. However, our indexing system is unique in that the indexes themselves become links on the chain, when the linked lists reach a certain size. Effectively, the indexes are nested, using different bits of the key digest, and the index tree grows as more keys are added.

Keys are digested using the 32-bit DJB2 algorithm, but then MegaHash splits the digest into 8 slices (4 bits each). Each slice becomes a separate index level (each with 16 slots). The indexes are dynamic and only create themselves as needed, so a hash starts with only one main index, utilizing only the first 4 bits of the key digest. When lists grow beyond a fixed size (plus a scatter factor), a "reindex" occurs, where new indexes nest inside themselves, using additional slices of the digest.

This design allows MegaHash to grow and reindex without losing much performance or stalling / lagging. Effectively a reindex event only has to move a handful of keys each time.

MegaHash is currently hard-coded to use between 8 and 24 buckets (key/value pairs) per linked list before reindexing (this number is varied to scatter the reindexes). In my testing, this range seems to strike a good balance between speed and memory overhead. In the future, these values may be configurable.

Each MegaHash index record is 128 bytes (16 pointers, 64-bits each), and each bucket adds 24 bytes of overhead. The tuple (key + value, along with lengths) is stored as a single blob (single malloc() call) to reduce memory fragmentation from allocating the key and value separately. 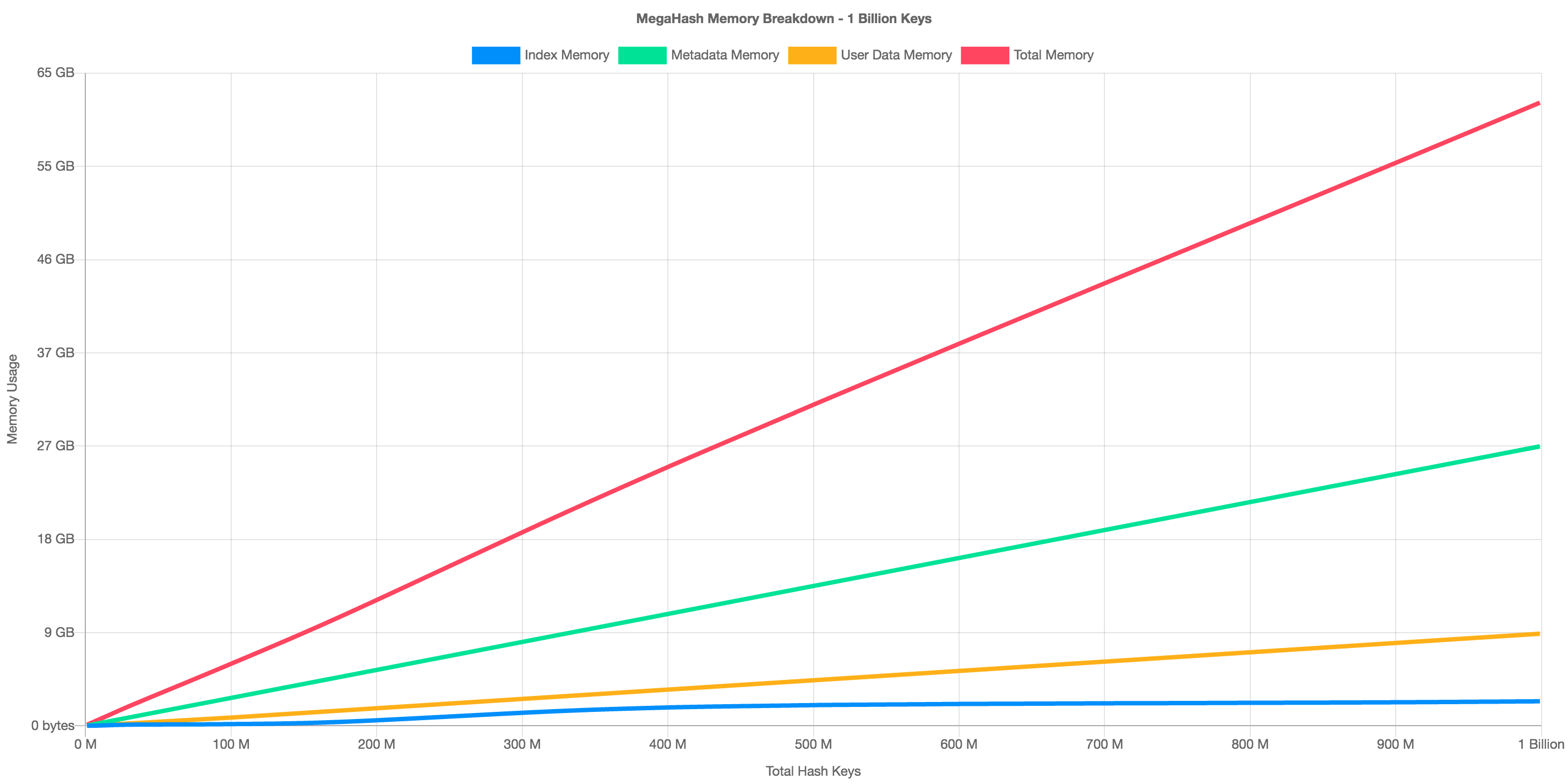 This is primarily due to the per-bucket "metadata" storage, which is currently adding 24 bytes per key. Frankly, at least 7 bytes of this is total waste, due to C++ memory alignment. I'm sure there are many potential improvements to be made here, but for now, it works well enough for my uses.

Please note that Megahash is not a complete drop-in replacement for ES6 Maps. Specifically:

A super-fast C++ hash table with Node.js wrapper, tested up to 1 billion keys.