Get the latest TbSync version

The official (stable) version of TbSync is hosted on addons.thunderbird.net (a.k.a. ATN) and you can install it by simply searching for "TbSync" in the Thunderbird Add-On Manager.

Downgrading from Beta back to Stable is not suggested. If you want to just try it out, create a new Thunderbird profile, so you do not influence your main profile!

Since it is not possible to mix beta releases and stable releases of the different TbSync modules, you must install all (!) XPI modules found in the /beta/TB68/ subfolder.

Save each XPI file to disk and install them in the Thunderbird add-on manager: Click on the gear icon and select "install from file": 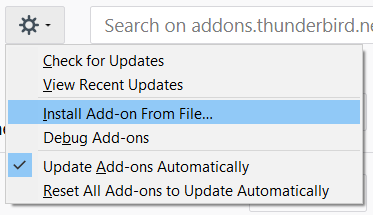 I suggest to restart Thunderbird after all modules have been installed.

Getting updates via the Beta Release Channel

The modules will update themselves as usually once per day, but not from ATN but from my own server. You can enforce an update by selecting "check for updates" from the gear menu: 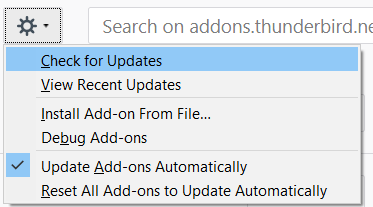