Sign up for free See pricing for teams and enterprises
Uses two Azure Functions to retrieve clickstream data from Adobe and serialize it to EventHub.
Find file

An endpoint must be setup by Adobe to retrieve the LiveStream data. Along with that setup one should receive a specific App ID, App Secret, and URI which are all required to authenticate and fetch data.

The run-time behavior of both Functions is determined by the following settings that must be present in your local settings file or in the App Settings for the Function App:

Overall, this is a fairly simple solution as can be seen in the following depiction: 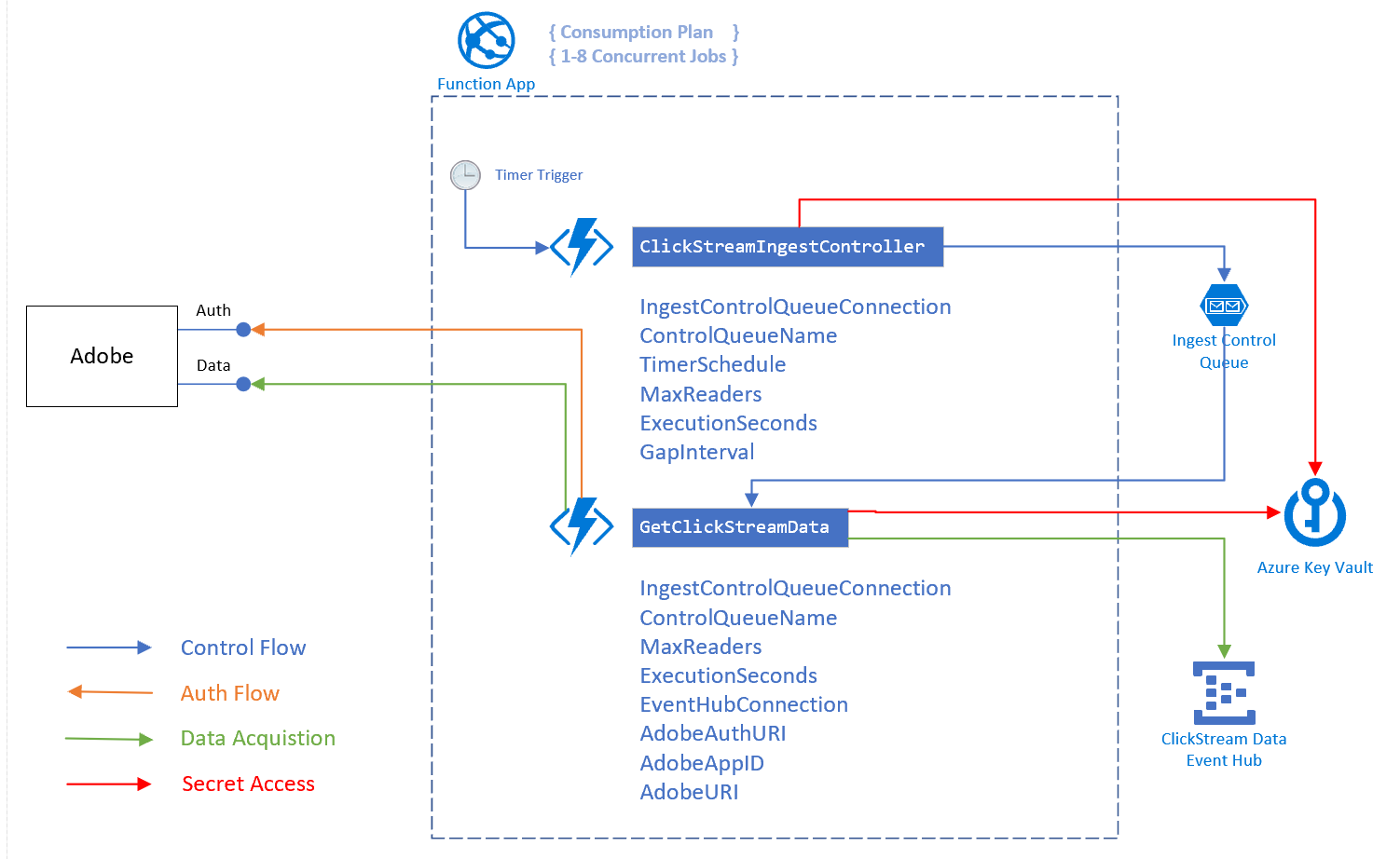 When the timer trigger fires the ClickStreamController places the configured number of messages on the queue based on the application settings. As each message becomes visible it trggers the GetClickStreamData Function. GetClickStreamData will retrieve needed secrets from the app settings (KeyVault if configured), retrieve an authorization token, and begin to retrieve data from the data endpoint for the configured amount of time. Each record received is added to an ICollector<EventHub> and at the expiry for the run duration that data is persisted to EventHub by the Binder.

Scheduling and concurrency are managed by adjusting 4 settings: TimerSchedule, ExecutionSeconds, MaxReaders, and GapIntervalSeconds. Never adjust one independently without considering the impact on concurrency and potential overall between running jobs and the next TimerSchedule interval. Additionally, MaxReaders should never be more than 8 as that is the maximum allowed by Adobe.

To understand how the schedule and concurrency work, please consider the following timeline for the settings of:

In this configuration the total run time for each batch of 3 readers is 4 minutes. With a GapInterval of 60 seconds each reader starts in the middle of the 120 second runtime of the previously started reader, but there are only ever 2 concurrent readers retrieving data.

While one may overlapp the end of a batch with the beginning of the next batch, care must be taken to not overlap the timer schedule with the ExecutionSeconds to the degree that would potentially cause:

The intent of this implementation is to target a Consumption Plan. Which means that the amount of RAM (1.5GB) is fairly low. Each reader collects records in an ICollector<EventHub> during execution and it is persisted at the end of the excution duration by the Binder framework. To that end, the goal for execution is to keep acquisition readers fairly short (1 - 5 minutes) as to not overrun the available RAM and to spawn them frequently enough as to keep the throughput high.

The preference should be to use KeyVault instead of direct App Settings for all of the sensitve items. In this implementation KeyVault was used. Additionally, SecureString was used for all things kept in RAM. For example, the auth token is retrieved and placed in a static variable. This provides a level of caching for any instance running on the same host as that static variable will have the value. However, a SecureString was used to ensure that memory could not be dumped and the string retrieved. NOTE that there are some gaps in that the token is retrieved over HTTPS and must be parsed from the response. Until the it is parsed, assigned to a SecureString, and the response object collected by GC it could be dumped from RAM.