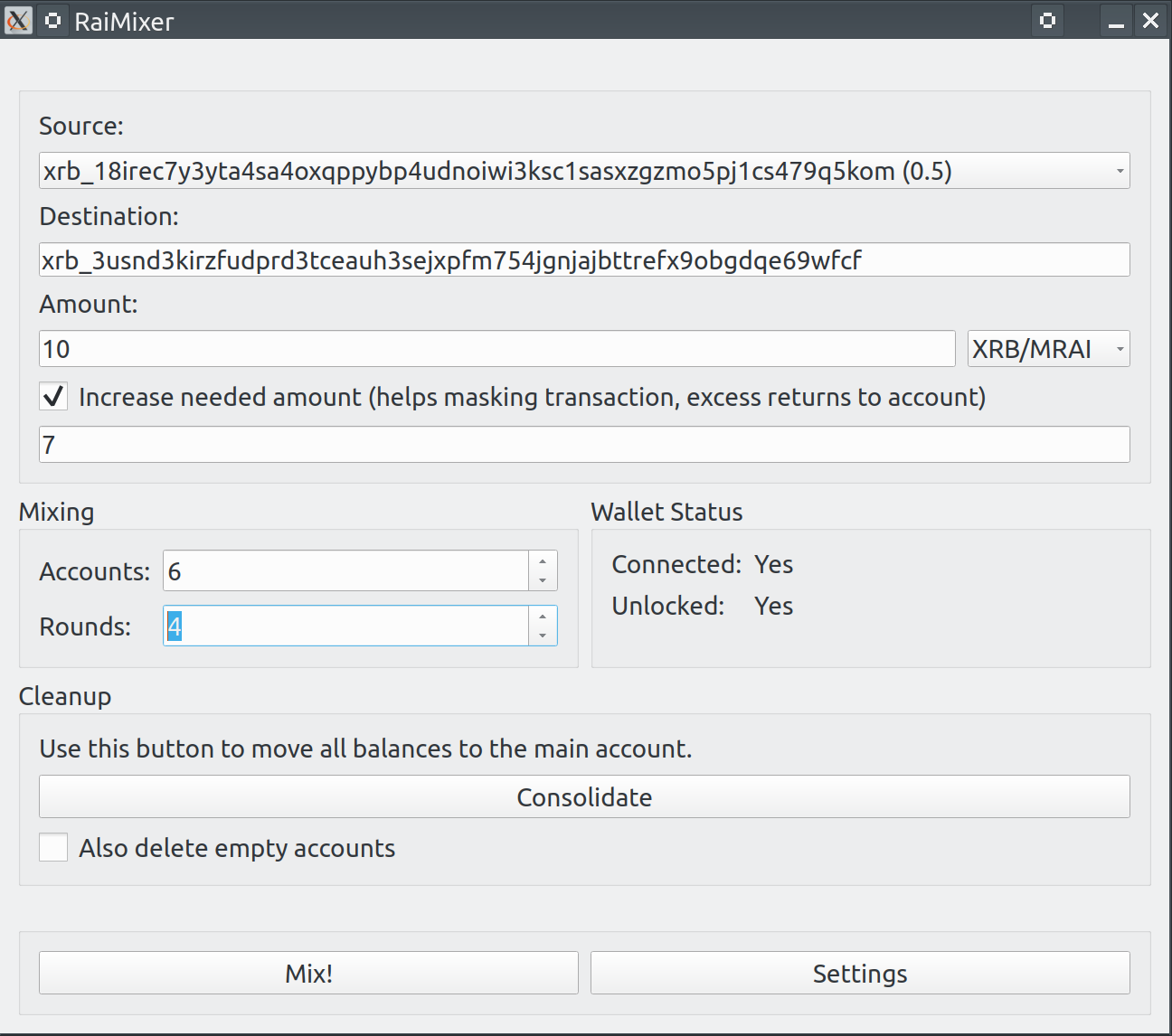 This video shows a simple session using RaiMixer to send a transaction to a destination account using a single round of mixing and 3 mixing accounts (18 transactions in total):

This is not finished. It needs more tests, documentation, and more anonymity features.

It could also could eat your funds alive and leave you poor and homeless. You've been warned.

This is a fund mixer/shaker to improve anonymity on RaiBlocks transactions. It will create a (configurable) number of mixer accounts and send the amount between them and the original source account in a number of (configurable) mixing rounds until finally all the funds are sent to the destination account.

This takes advantage of the fast and feeless transactions of the awesome RaiBlocks cryptocurrency.

Depends on your definition of safe. This probably won't protect you from a well done blockchain analysis by professionals. But since they can only get a certain % of certainly, that lowers as you increase the number of mixing rounds and accounts, it's very improbable that it could be used as solid evidence in a trial, for example.

In case you missed the warning in the first section, please note that this is currently a very early release and some things will improve and there could be bugs.

Won't the nodes know where the amounts are coming because of my IP?

No, nodes doesn't have a way to know of a block they're receiving is being originated in a peer or simply propagated.

Is this safer than an online mixer?

Not really. The advantage of an online mixer like RaiShaker is that it mixes amounts from different users. So even while nodes can't know if different accounts are from the same or different persons, a comprehensive analysis could see if all the funds from the first transactions before mixing came from knew exchanges accounts and thus can guess than the transactions following that one are to the mixers accounts. RaiShaker avoids that problem mixing the funds from its users together.

But this also have some advantages over an online mixer:

To be double safe you could use RaiMixer before sending to RaiShaker.

How much time does it take?

The bottleneck is the small POW done on every transaction and the fact that, at least on my tests, the node doesn't seem to parallelize RPC requests even if it's configured to use several threads or receive them on different connections. So it'll depend on the number of transactions, which in turn will depend on the number of mixing accounts and mixing rounds configured.

This number of transactions can't be exactly predicted because the program randomized some things, but a typical 4-accounts, 2 rounds mixing produces about 50 transactions, which on my machine take about 5 minutes to complete.

First, edit your ~/RaiBlocks/config.json and set to "true" the settings called enable_control and rpc_enable. The close and reopen your wallet or node and unlock it. It must remain running while this script runs. The program will remind you if either of these things is not done.

The program can be used in command line or GUI modes. For the GUI, just run:

The simplest example of the command line mode would be:

This will use the default wallet and accounts as specified in RaiBlock's config.json file. You can use the options --wallet and --source_acc to set specific ones if you want.

The amount must end with "mrai" for megarais or "krai" for kilorais. Smaller amounts are not supported at the moment (but you can use decimals).

Another interesting option that you could want to consider is --initial_amount. This will make the mixing send the specified bigger amount than the one actually needed to make analysis harder; excess amount will be returned to the source account at the end of the process.

Mixing accounts will be deleted at the end of the operation if everything worked.

If the RaiBlocks node or wallet crashes during the operation (which sometimes happens), you can use the --clean option to recover all amounts in all the accounts except the one you set as --source_acc. Please note that this can't make out mixing accounts from previous sessions from user-created accounts, so if you want to keep some amount in other accounts you'll have to move the fund manually (or run this and then restore the funds later, --clean won't delete any account.)

If you want to contribute a PR for any of these points you're more than welcome!

I want to thank you!