As a quick example, we are going to setup Docker-OSM with default values everywhere:

If you use rancher for container management you can use the provided docker-compose.yml which allows you to automatically download the settings onto the host machine by using environment variables.

For further reading and customizations, read below.

In this example we will set up an OSM database for South Africa that will pull for updates every 2 minutes.

Specify a PBF file for your area in the environment variables for osm_downloader container. You can download some PBF files on these URLS for instance :

You must put only one PBF file in the settings folder. Only the last one will be read.

In settings, you can edit the mapping.yml to customize the PostGIS schema. You can find the documentation about the mapping configuration on the imposm website: https://imposm.org/docs/imposm3/latest/mapping.html The default file in Docker-OSM is coming from https://raw.githubusercontent.com/omniscale/imposm3/master/example-mapping.yml

Note that you can't import OSM metadata such as author, timestamp or version. This is a limitation from ImpOSM, check the feature request on the Imposm repository. Imposm is designed for spatial analysis, not for OSM contribution analysis. If you need such a feature, you need to use another database schema supporting OSM Metadata. You can check the OSM Wiki for "Lossless" schemas.

You can configure the time interval in the docker-compose file. By default, it's two minutes. If you set the TIME variable to 0, no diff files will be imported.

The default update stream is worldwide. So even if you imported a local PBF, if you don't set a clipping area, you will end with data from all over the world.

During the initial import or post update imposm uses the flag -limito which allows you to define a smaller area that you can work with.
This is always desirable to limit the features being imported into the database rather than clipping them.

NB: Ensure you add a geojson covering the area you intent to clip into the settings folder. The geojson can be the same extent of the administrative area of your country or it can be a smaller extent. The CRS of the geojson should always be EPSG:4326.

NB: It is encouraged to simplify the geometry for the clip.geojson as a simplified geometry is easier to process during the import. Rather use the minimum bounding box for the area you intent to clip your dataset with.

The database is provided with some default styles. These styles will be loaded automatically when loaded in QGIS. It's following the default OSM mapping from ImpOSM.

You can add PostGIS functions, triggers, materialized views in a SQL file called post-pbf-import.sql. It will be imported automatically in the database.

Now build the docker images needed to run the application:

In production you should daemonize the services when bringing them up:

You can check the timestamp of your database by reading the file : settings/timestamp.txt or you can use :

In the makefile, you can switch to another docker compose project. The other one includes QGIS Server. When it's running, you should be able to open, on the host(not in docker), the index.html file and see OSM and QGIS Server showing PostGIS tables. The webpage is using Leaflet.

If you want to tweak the QGIS Project, you need to add a host in your in /etc/hosts:

Because in the docker-compose file, the link is made with the PostGIS database using the alias db. 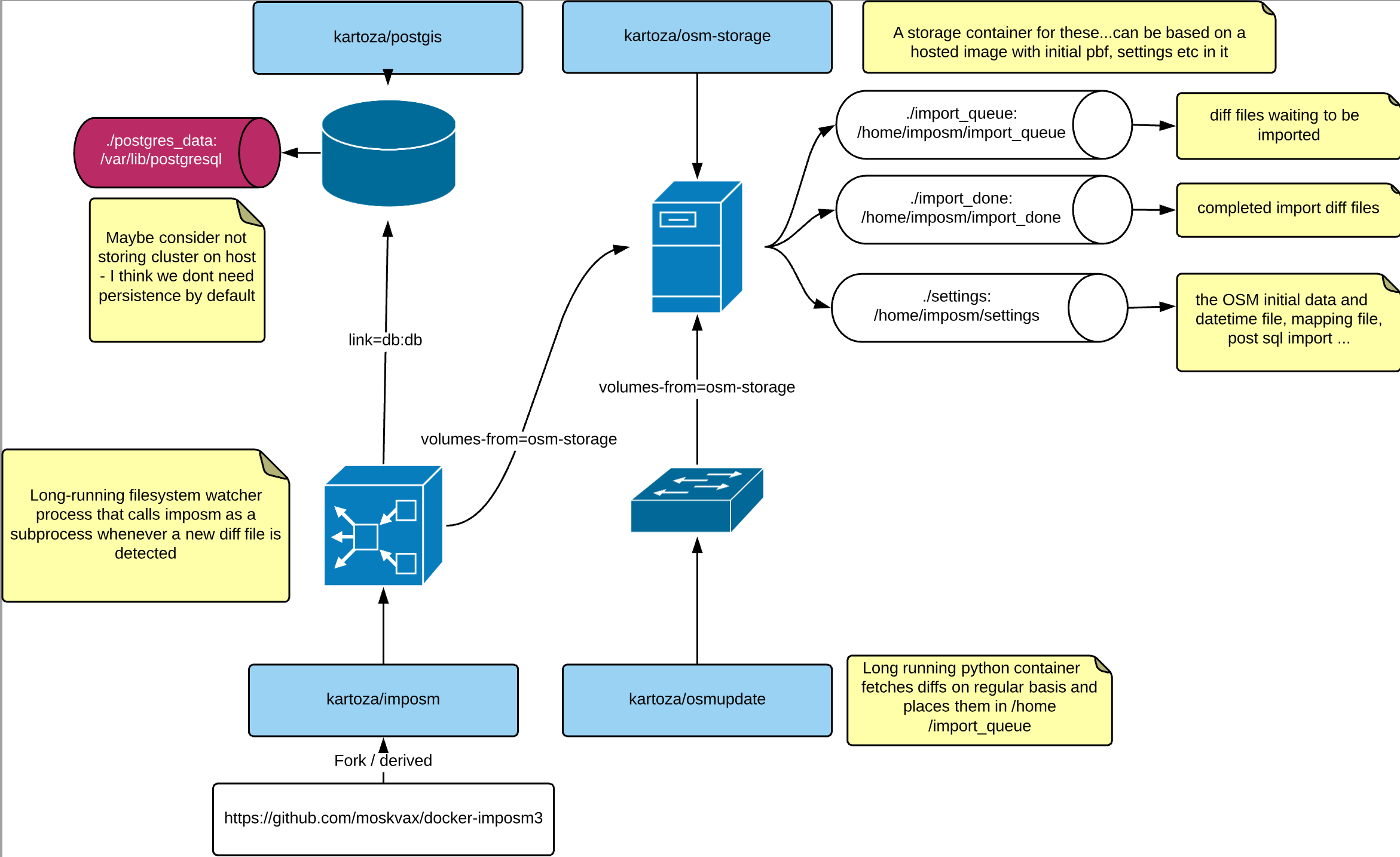 This docker image, when run will regularly fetch any new diff file for all the changes that have happened in the world over the update interval.

You can also specify a custom url for fetching the diff if you wish to retrieve regional diffs rather than the global one.

You can specify a polygonal area for the diff so that it will only apply features from the diff that fall within that area. For example providing a polygon of the borders of Malawi will result in only Malawi features being extracted from the diff.

Note: the diff retrieved and options specified here are not related to the initial base map used - so for example if your initial base map is for Malawi and you specify a diff area in Botswana, updated features in Botswana will be applied to your base map which only includes features from Malawi. For this reason, take care to ensure that your diff area coincides with the region covered by your original base map.

Once the diff has been downloaded, it is placed into /home/import_queue where it will be picked up by the long running imposm3 container, which will apply the diff to the database.

Put a state file in base-pbf like this one : http://download.openstreetmap.fr/extracts/africa/south_africa.state.txt

With -e, you can add some settings :

This image will take care of doing the initial load for the selected region (e.g. planet, or a country such as Malawi) into your database. It will then apply, at a regular interval (default is 2 minutes), any diff that arrives in the /home/import_queue folder to the postgis OSM database. The diffs are fetched by a separate container (see osm_update container).

The container will look for an OSM file (.pbf) and its state file (.state.txt) in BASE_PBF.

With -e, you can add some settings :

You can adjust these preferences in the docker-compose.yml file provided in this repository.

With -e, you can add some settings to PostGIS:

More environment variables for Kartoza/postgis image can be found from https://github.com/kartoza/docker-postgis#environment-variables

You can run a QGIS Server front end or martin vector tiles to the OSM mirror by using the provided docker-compose-web.yml file. For example:

For more information about martin configuration and usage can be found from https://github.com/urbica/martin

This application was designed and implemented by:

With some important design ideas provided by Ariel Nunez (ingenieroariel@gmail.com).

Parts of this project are built on the existing work of others.