grainfields turns your 128 grid into a granular synthesizer with 8 voices - each with up to 10 constant streaming grains. Modulate grain parameters (pitch, duration, loop rate, position etc.) of each voice to create a large variety of interesting timbres and textures. Record and loop pattern gestures to create rythmic and melodic sequences.

Before launching the grainfields Max for Live device make sure that your grid is connected.

1st step in Ableton is to drop 'grainfields_master.amxd' on an empty track. This device establishes the osc connection with monome (and Lemur on iPad). Show/hide osc settings with the toggle at the bottom of the device. Your monome should auto-detect. 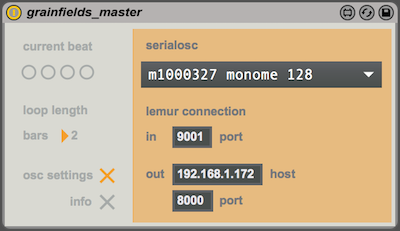 2nd step is to drop 'voice_1.amxd', 'voice_2.amxd', 'voice_3.amxd' (...and so on) on separate audio tracks (as suggested below). When a new voice m4l device is loaded on an audio track in Ableton, the device will automatically activate the corresponding lights on your monome grid. If you only need e.g. 3 voices then load 'voice_1', 'voice_2', and 'voice_3'. You don't need to load all voices. 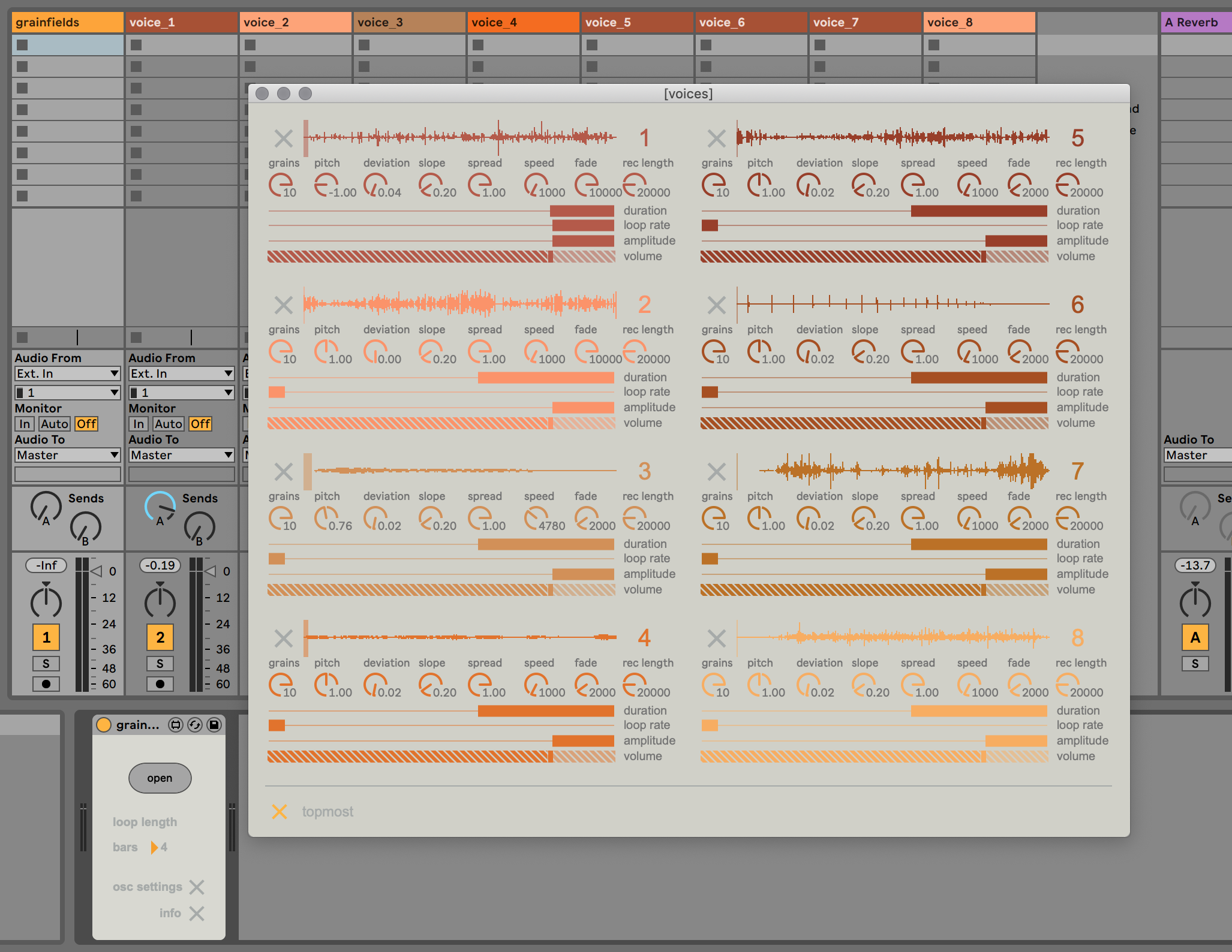 Every row represents a voice, and each voice contains a buffer with up to 10 individual grains. To change buffer content simply drag and drop an audio file into the waveform display of a voice.

Control the grain density, base pitch and deviation, duration, loop rate, amplitude, envelope slope, and stereo spread of each voice. Additional parameters include:

Start / stop transport by pressing the space bar. The transport needs to be activated in order to record pattern gestures.

Set the desired length of the pattern loop in bars (default=2).

When recording an input source into a buffer the buffer will autosave the recording into the project folder (located inside the "media" folder).

Saving a preset (shift>click on a slot) will store all current parameter settings in each voice as well as the file path of buffer contents.

Control individual voices directly in Ableton or via the included Lemur interface (requires Lemur on iPad).

Install the interface on iPad ('monome_grainfields.jzml' located in the project folder) and make sure to provide the correct port and host settings for incoming and outgoing OSC.