Arli is the command line tool, that's both — the Arduino Library manager that's decoupled from any IDE, as well a project generator based on "arduino-cmake". By coupling dependency management with CMake-based build system, Arli provides an easy way to package, share, and distribute complex Arduino projects.

Please visit Gitter to support and a discussion of this project.

Arli is an Arduino library manager with the ability to search libraries, install a single library, or bundle any number of libraries with the project. Arli also is a new project generator based on the arduino-cmake build system.

Arli is a rather simple and easy to use command-line tool which offers several indispensable features that help with Arduino project development, in particular for much larger projects with many dependencies and external libraries.

What's more, is that projects generated by Arli's generate command are highly portable from one system to another. Anyone can download your project build/upload with very little work.

To get a sense of its feature, we invite you to watch the following screen cast: 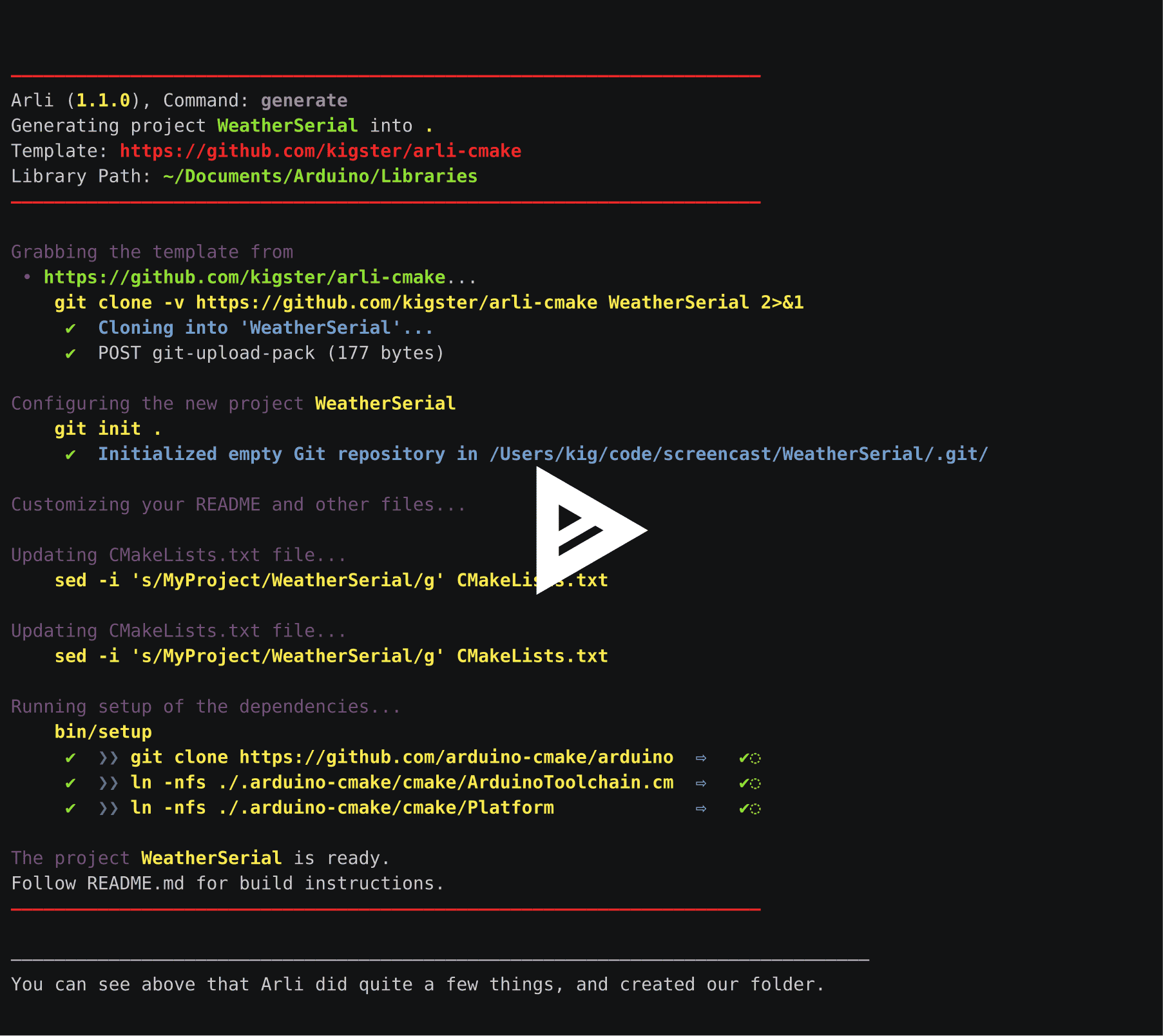 How is Arli Different?

Arli is a fast, small, and pretty specialized command line tool (written in Ruby) that only does four or five things very well, and relies on other well-supported projects do their job — in particular, it relies on Arduino SDK, and arduino-cmake when it generates new projects.

For additional discussion, and comparison with Arduino IDE, or PlatformIO — please read the discussion section down below

Arli understands that the folder where the library is installed must be named correctly: in other words, folder name must match the header file inside of the folder for the library to be found.

When Arli downloads libraries in ZIP format, they are unpacked into a folder that would not resolve as an Arduino library folder without having to be renamed. Arli provides an algorithm that searches the contents of the folder for the source and header files. The name of the directory is then compared to the files found, and in most cases Arli will automatically **rename the library folder to match the main header file **

For example, 'Adafruit GFX Library' is the proper name of a corresponding library, and it's ZIP archive will unpack into a folder named Adafruit_GFX_Library-1.4.3. Arli will then detect that the header file inside the folder is Adafruit_GFX.h. In this case Arli will rename the top-level folder to Adafruit_GFX, and make the library valid, and its folder easily found.

Arli is a ruby gem, so to install it run:

You may need to use sudo before the command, if you are using a system-wide ruby installation.

Once installed, run arli with no arguments to see it's help screen.

Arlifile is the cornerstone of this library, and so we discuss this in detail. It's a central configuration file that defines library dependencies, and also some additional metadata, such as the board and CPU, as well as the hardware libraries.

NOTE: One of Arli's design goals is to make Arlifile a sort of a reusable "configuration" file for the project that helps make your project easily portable.

You can specify libraries by providing just the name: (and posibly version) — but the name must match exactly a library in the Arduino standard database! This is a critical part.

EXAMPLE: If you want to add Adafruit_GFX.h header, you need to find the appropriate name for this library in the database. If you know the header name, the easiest way to do that is to do the following search:

You will see in the output that only two libraries match:

You want to copy the name "Adafruit GFX Library" and place it in the Arlifile against the name: attribute.

You can provide the following fields in the Arilfile if you want the library to be found in the Arduino Library database automatically:

If a library you are using is not in the public database just provide its name and the url fields. The URL can either be a git URL, or a downloadable ZIP file.

Arli will use the url field if it's available without trying to search for the library elsewhere.

Installing a Sub-Folder of a Library

As of version 1.3.0, Arli supports folder key in the Arlifile against each library. If provided, it is meant to be a relative sub-folder within the checked-out library directory structure, and only that folder will be installed as the library, and the rest removed. In the provided example, BackSeatDriver is a collection of three libraries, and therefore to install one of them we must tell Arli a folder within that repository.j:wq

When you run arli bundle in the folder with an Arlifile, many things happen. Below is another screenshot of running bundle:

Let's break down what you see in the above screenshot:

You can change the format of this file with -f/--format flag.

The CMake format is now fully supported, in tandem with arduino-cmake project.

Below is the resulting Arlifile.cmake after running arli bundle on the above mentioned file.

This file only works in tandem with arli-cmake project.

See the generate command, which creates a new project with CMake enabled.

This command creates a new project using the template provided by the arli-cmake project.

This command will create a brand new project under ~/arduino/sketches/MyClock, and you should be able to build it right away:

The above steps can also be done via bin/build src bash script.

There is an additional example folder that shows the complete example that uses external libraries, and builds and compiles using CMake and Arli.

IMPORTANT: Please do not forget to run bin/setup script. It downloads arduino-cmake dependency, without which the project will not build.

Use this command to install a single library by either a name or URL:

To search Arduino library database, you can use the search command.

You can search in two ways:

arli search AudioZero does a simple search by name, and would match any library with 'AudioZero' in the name, such as AudioZeroUpdated. This search returns three results sorted by the version number:

The search argument can also be a ruby-syntaxed expression, that (if you know ruby) is actually eval-ed into the method parameters. Here are a few examples:

You can also use regular expressions, and set maximum number of results printed by the -m MAX flag. Finally, you can change the output format of the search, by passing -f <format>, where format can be short (the default), long, json, or yaml.

For example, here is a how long format looks like:

With -m LIMIT flag you can limit number of results. But in our case above we printed all libraries that had the word "adafruit" (case insensitively) in their official name. We could have used version:, or author, or website, or even url and archiveFileName fields. For complete description of available library attributes, please see the official definition of the library.properties file.

A detailed description of the complete search functionality is documented in the library that provides it — arduino-library. Arli uses the arduino-library gem behind the scenes to search, and lookup libraries.

Who is Arli For?

Arli is ideally suited for C/C++ programmers who have some basic knowledge of CMake, and who want to build larger-than-trivial projects on Arduino platform. Arli promotes use and reuse of libraries, which help take advantage of the Object Oriented Design Patterns, decoupling your code into reusable libraries.

Having said that, Arli is also helpful for projects that do NOT use CMake. It can be used purely as a library manager, or GitHub repo downloader.

Why not the Arduino IDE?

Arduino IDE is not meant for professional engineers — it's a fantastic educational tool for students. And while it lacks basic features of C/C++ development it succeeds in making Arduino programming accessible to young kids and students.

PlatformIO is a great "eco-system" that includes not just Arduino, but many other boards, provides integrated library manager, and Atom as the primary IDE. It's a fantastic tool for beginner/intermediate developers, much better than Arduino IDE.

But it's not without its downsides: to some — PlatformIO feels too heavy. It comes with a gazillion additional features you'll never use and it tries to be too much all at once. Perhaps for some people — it can be a feature. But for the author and other members of the Arduino dev community, PlatformIO design goes against the fundamental principals of Unix Philosophy, which promotes a minimalist, modular software development delegated to specialized commands that can be all interconnected (think grep, awk, sort, uniq).

More Reasons Why Arli is Needed

Arli is both an Arduino Library Manager and a project generator. If you are using Arduino IDE you may be wondering why is this needed?

Arli shines when you need to build a complicated and multi-dependency project using an Arduino compatible board such as Teensy, which has 16x more RAM than the Arduino UNO, and therefore allows you to take advantage of many more third-party Arduino libraries at once within a single project.

A few years ago the author built a complex project called Filx Capacitor, which relied on ten external libraries. Managing these dependencies was very time-consuming. Asking someone else to build this project on their system was near impossible. Not just that, but even for the author himself, after taking some time off and returning to the project — it was still difficult to figure out why it was suddenly refusing to build. So many things could have gone wrong.

This is the problem Arli (together with the very powerful arduino-cmake project) attempts to solve. Your project's dependencies can be cleanly defined in a YAML file called Arlifile, together with an optional board name and a CPU. Next, you add a bunch of C/C++ files to the folder, update CMakeLists.txt file and rebuild the project, upload the firmware, or connect to the serial port. See arli-cmake for more information.

Bug reports and pull requests are welcome on GitHub at https://github.com/kigster/arli.

Arli is the command line tool, that's both — the Arduino Library manager that's decoupled from any IDE, as well a project generator based on "arduino-cmake". By coupling dependency management with CMake-based build system, Arli provides an easy way to package, share, and distribute complex Arduino projects.