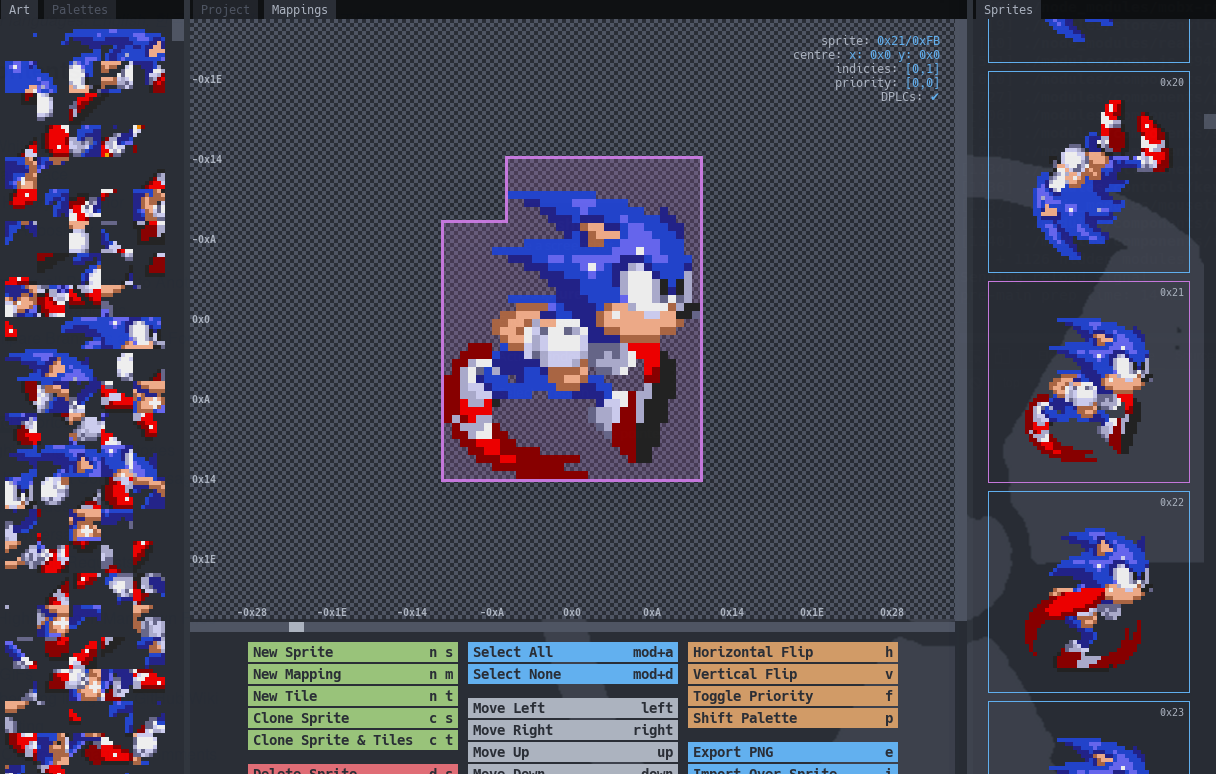 Flex 2 is a multi-purpose art and mapping editor for the Sega Megadrive. The original Flex was a web app, which gave it several limitations. A full rewrite for desktop opens up the ability to use real project files, as well as various other improvements.

Most of the keyboard shortcuts (and indeed, behaviours for the application) are listed on the Mappings tab at the bottom. Some commands take a multiplier, so 32 + Up will move the selected mappings 32 pixels up, or 8 + nt will add eight new tiles.

You can cycle through options in dropdown boxes and increase/decrease numbers in textboxes with the mouse scroll wheel. This also works for things like colour select in drawing mode. Up/Down can also be used in textboxes.

The UI layout is fully customisable by moving or resizing tabs.

Project files serve as definitions for all the objects in your project. They should sit at the root of your project directory and be committed to version control. Project file configuration is autosaved.

A key change from version 1 is that Flex no longer has a game mode. Data is saved and loaded as whatever the definition for the object says. This means you can mix formats (like S1 Mappings and S2 DPLCs for editing Sonic CD data), or even provide custom definitions.

The 'label' specified in the mapping and DPLC definitions is to use as the main label if one is required without the output.

The mapping editor has the following mouse interactions;

When entering drawing mode by pressing m, dragging over the sprite will draw in the respective colour of that mouse button. If mappings overlap, both will have the colour applied.

When doing actions like deleting a mapping, Flex 2 will attempt to remove corresponding unused DPLCs. The raw editor allows you to modify the raw data for mappings and DPLCs without performing any of these optimisations. It can also be used to change the draw order by reordering mappings.

Palette input will be normalised to Megadrive colours. To change the order of palette lines, you can drag the numbers to different positions.

The Sprites tab gives an overview of your full object's data, allowing you to change sprites or reorder them by dragging and dropping.

When importing an image over the current frame there is no limitation on image dimensions.

For importing a spritesheet, either the alpha channel or the top left pixel color will serve as transparency. The fuzziness dictates the minimum separation distance between sprites.

Mapping output can be configured to either reduce the number of tiles, or the number of mappings. The algorithm favours fewer horizontal sprites over vertical ones.

Both methods of importing use CIEDE2000 nearest colour matching to the current palette.