Add the executable flag to it first, e.g. with

or open the file’s properties by right-clicking on it in your file browser.

the win.master-KNOSSOS.nightly.exe here is equivalent to the normal nightly but with debug infos

Nightly releases for every new commit of the master branch.

(the date is older so it lists the official release first)

The dataset loading mechanism was updated to support a wider range of dataset configurations, including

It is now possible to load triangle meshes into KNOSSOS. Meshes are a set of vertices, colors and indices. In KNOSSOS they are associated to one skeleton tree and are displayed inside the 3D viewport.

Simply insert a mesh file (.ply) into a KNOSSOS annotation file (.k.zip) and it will be loaded with it.

Visit our wiki to read about the exact file format.

Inside KNOSSOS you can jump to specific areas of interest: Just click on the mesh location and press S. 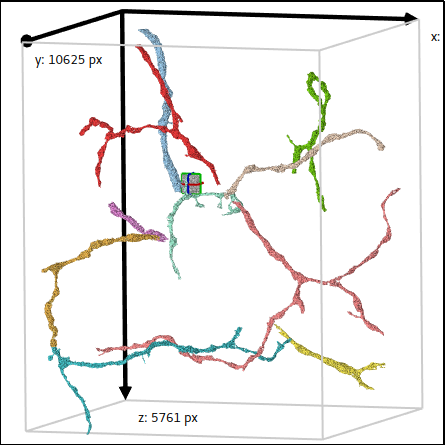 For neural annotations you can now create synapses with a synaptic cleft as
well as pre- and postsynapse:

Until now additional information about trees and nodes had to be crammed into the respective object’s comment section. This became unreadable and hard to parse very quickly.

So we introduced customizable and visualizable properties. Properties are either simple text or textual or numerical key value pairs.

Numerical node properties can be highlighted inside the viewports: You can choose to scale radius by property value or to map property value to color map value, or both.

KNOSSOS now has a plugin manager, allowing you to write and share plugins written in Python in an online repository.

For example you can write custom GUI elements, create annotations programmatically or utilize your own algorithms. The idea is to customize KNOSSOS and make it fit your unique workflows.

As a starting point and reference we have a set of plugins available at https://github.com/knossos-project/knossos-plugins.

The Manager can be found under the “Scripting” menu entry.

The *.deb package apparently doesn’t work on many systems.
If it doesn’t, try the previous release instead or quickly install either the release version or a git snapshot of KNOSSOS using junest.

and many more features and changes! See the changelog for details.

We now have a Mac release!
Please note following differences between the Mac version and the other versions:

We are still working on unifying the behaviour on all platforms. Please let us know if you find any more unexpected behaviour by opening an issue here:

KNOSSOS is a software tool for the visualization and annotation of 3D image data and was developed for the rapid reconstruction of neural morphology and connectivity.

KNOSSOS 4.0 is a milestone release with a completely reworked graphical user interface based on
the QT framework.