This is a fork for a final project for cs339 at Williams College. We have modified modified this system to use the Kademlia DHT so that one's site does not need to be locally hosted, but rather is hosted somewhere in the network as determined by the DHT. This eliminated the need for users to maintain a persistant connection to the network, maintaining a server, to remain active in the market. When users are offline, encrypted orders could be stored by others and then can be read by the owner of the site when they do connect. Community incentives, such as favorable rates with escrow figures and better reviews or ratings, could be associated with uptime and the amount of data that they are hosting so that there is an incentive for users to be connected when possible. Replication is also crucial with the ability to update and synchronize a site in response to changes from its owner.

We are using the Entangled implementation of the Kademlia DHT design, which runs on the Twisted library. To have both the Entangled node and the market node running at the same time, the existing use of the TornadoIOLoop for the market node had to be modified. It now all runs of the Twisted Reactor with a TornadoLoop API ontop to allow for the continued function of the rest of the application without modification.

running our fork and looking at processes

After your machine had been properly configured, you can run the program using the launch.py script in the top-level of the repository. This python script creates a simple CLI for the user to interact with, functionality is fairly simple to add by entending the functionality of the input listener. It currently supports killing a number of active nodes, viewing the active nodes, and creating new nodes, as well as shortcuts to the below terminal commands. Usage is viewable through the 'help' command while running the script.The

To look at the status of the nodes on the machine, open a new terminal window and use one or both of the following commands.

Make sure that the machine is running Ubuntu 12.04 or above with lsb_release -d

run ./configure.sh which is included in the repository, answer the prompts with a Y as necessary.

When the process is completed, try to perform ./launch.py and look to see what if any errors occur. If errors do occur, compare them with the different stages of the configure.sh file to see what might have gone wrong, or simply rectify them from the command line.

OpenBazaar is a decentralized marketplace proof of concept. It is based off of the POC code by the darkmarket team and protected by the GPL.

This project is alpha and all feedback is welcome at: http://www.reddit.com/r/Bitcoin/comments/23y80c

We are continually on IRC chat at #OpenBazaar on Freenode

All features are currently in alpha stage. Current functionality includes starting a connection to the distributed marketplace and viewing content in a browser. Transactions are not possible.

NOTE: These dependencies are for reference, they do not need to be manually installed if the Quick Start guide is used.

OpenBazaar now uses MongoDB as the backend for storing persistent data. At the moment only orders are being tracked there, but this will be fleshed out ongoing. You will need to set up a MongoDB instance on your machine outside of this software and create a database called 'openbazaar'. There is no authentication or encryption configured, but I will be adding in support for this soon.

From command line: mongo use openbazaar

For OSX there is a CLANG error when installing pyzmq but you can use the following command to ignore warnings:

If you're getting errors saying ZMQError: Can't assign requested address then you probably need to bring up some loopback adapters for those IPs higher than 127.0.0.1.

Install behave and run behave in the OpenBazaar folder. The tests themselves are located in the features folder.

This screen shot looks horrible and is just a placeholder ATM. Designers wanted. Apply to brian@openbazaar.org if you're interested in helping out. 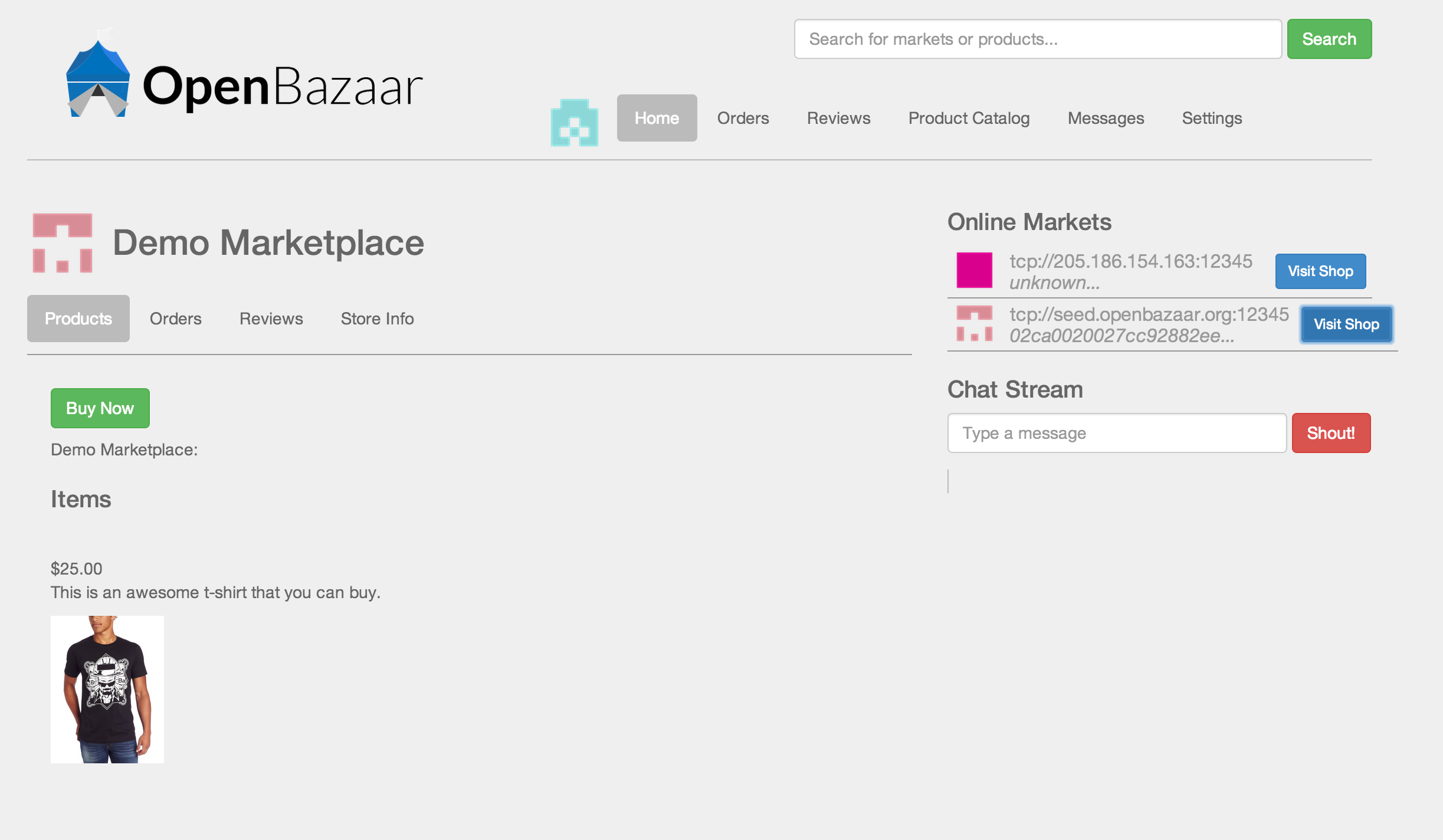 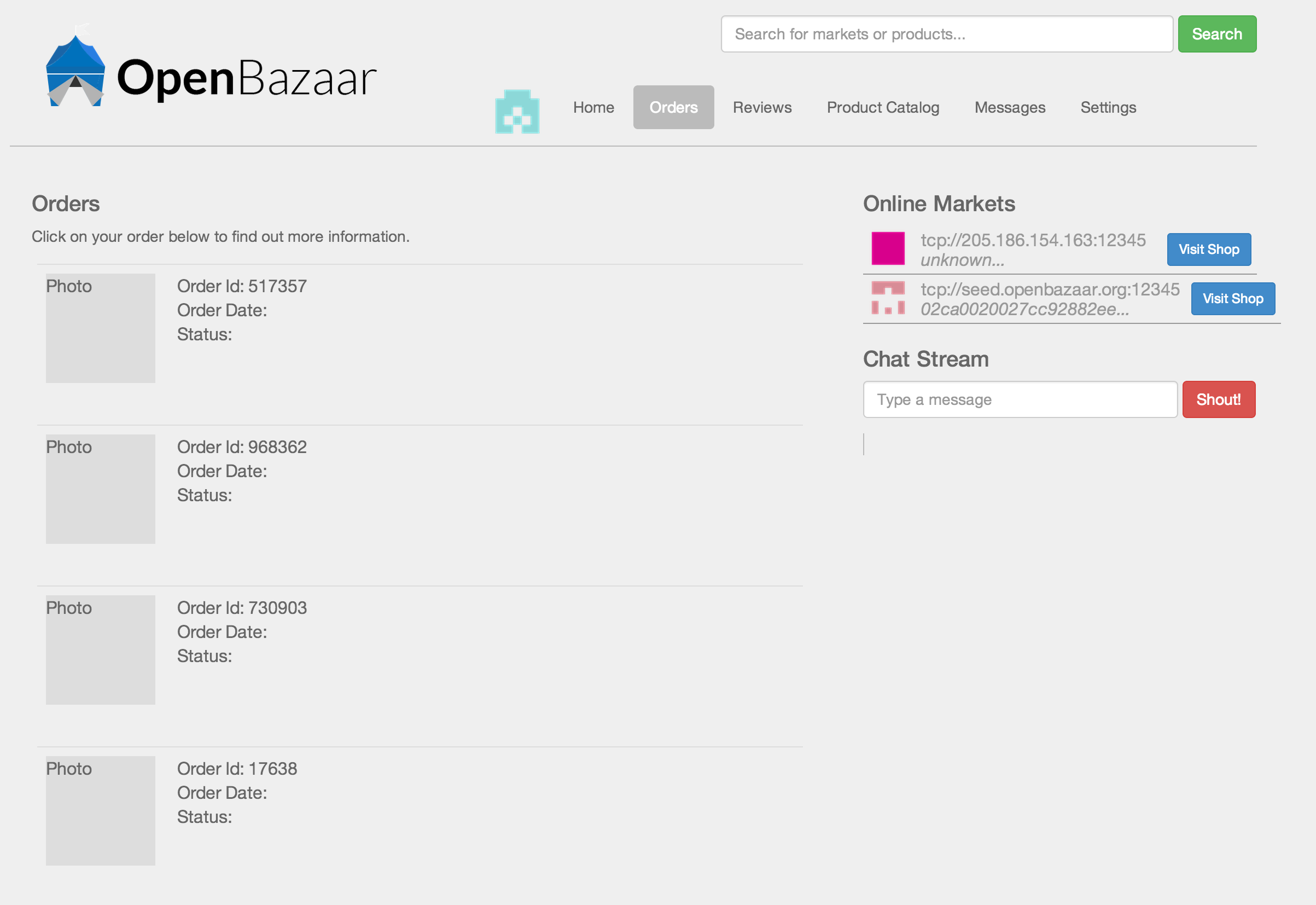 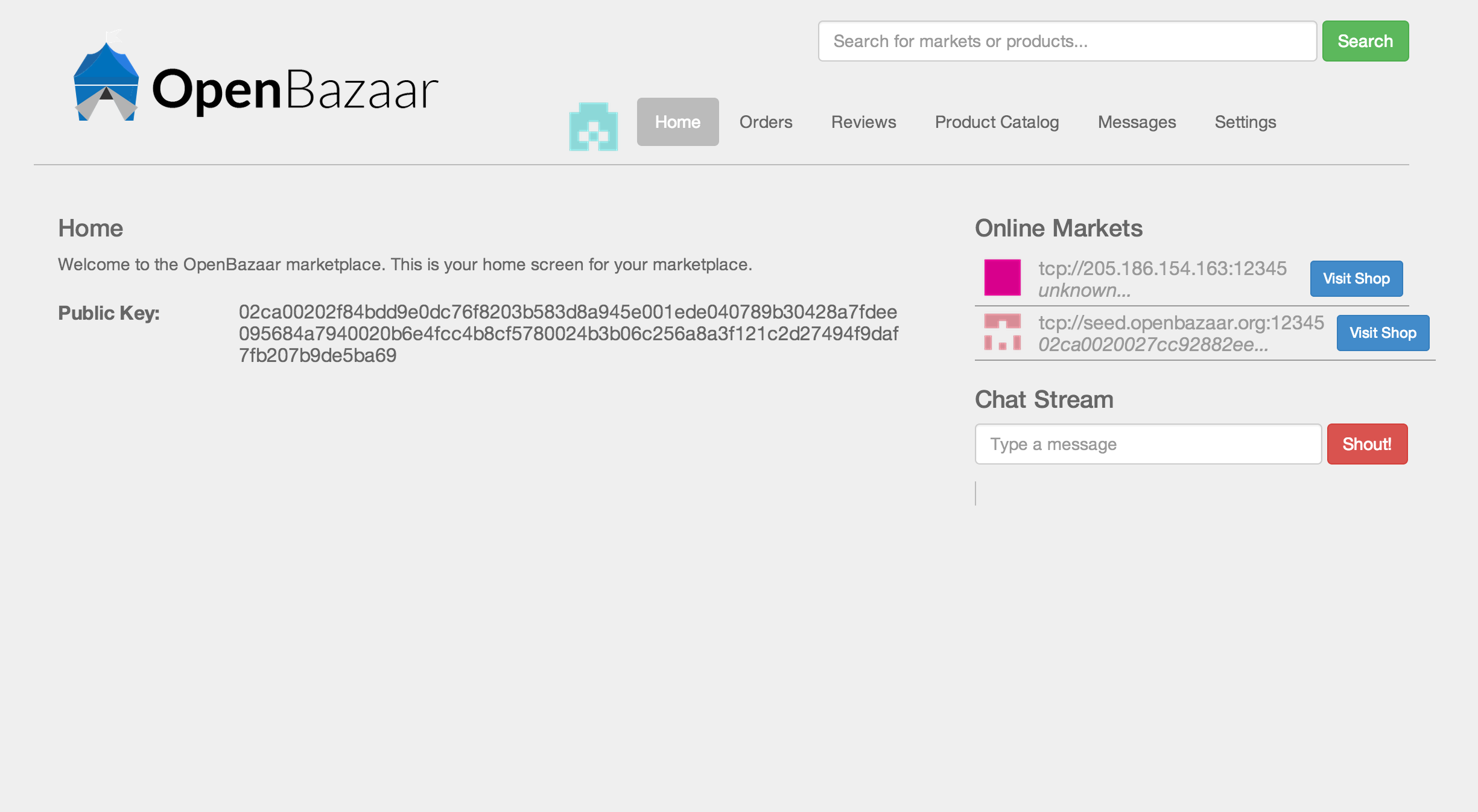