The design goals of parc are:

parc is built specifically for deterministic context-free grammars. In other words, parc must be able to determine the next state transition from the top symbol.

Note: It's my own general belief that ambiguous languages are of little practical use. The goal for parc is to be able to process any mainstream programming language but will initially focus on deterministic context-free grammars, DFA construction and pushdown automatons with fast O(n) run-time performance (to the extent possible).

parc is an execution environment and as such its front-/backend is decoupled from each other. The parc frontend processes parc grammar and builds a deterministic finite automaton and pushdown automaton representation that can be used to perform lexical analysis and textual processing. The parc backend takes these concepts and processes text. Constructing a syntax tree.

The result is a message pack (see http://msgpack.org/) object graph that can be used to add more deep semantic to text (such as syntax highlighting).

(concept borrowed from the Microsoft Roslyn Compiler Infrastructure) the original input can always be reconstructed from the syntax tree (even if it is ill-formed).

The above token matches a single upper case letter between A and Z (inclusive).

The above token matches at least one occurrence but may match more. And is equivalent to the following notation.

Parenthesis are not required but recommended for clarity.

We can also introduce alterations (or choice).

The above simple rules form the basis for a regular language construct that is used to describe how to match a token.

Note that the following are all examples of the same, identical token (these are ambiguous and illegal).

Token (or production) rules cannot start with an optional repetition.

parc will reject any token rule that results in an ambiguous (or non-deterministic) lexer. It will tell you exactly what the issue is what what you need to do to disambiguate the language rules.

There's also an unary complement operator that can be used to match anything which does not fall within a specific range.

This is useful to match a typical C-style string with any number of optional escape sequences in it.

The above token will match a quotation mark (") followed by anything which isn't a quotation mark or escape character (). If it encounters either it will stop and accept an escape sequence and optionally repeat.

The above parc token rule is identical to the below regular expression.

We can break down this regular expression into parc syntax in the following way.

To understand recursive decent parsing we'll be looking at a reference source implementation and then translate that into a intermediate representation (byte code) that we can run in a stack machine.

Let's define a grammar. We'll be using a small grammar for that can be used to represent expressions (with explicit order of evaluation, parentheses).

The above grammar has two types of tokens (number and operator) and two implicitly defined tokens (left and right parenthesis). When then have two productions. Expression and PrimaryExpression. This distinction is necessary to avoid left recursion.

Note: Remember, left recursion can only happen if you apply a production recursively without consuming a token. As a general rule, every application of a production should be preceded with at least one token.

If we were to implement the above grammar in the form of a recursive decent parser it would look something like this.

Writing the above kind of code is relatively straight forward. When you add syntax tree construction and error handling (which we don't have here) it gets tricky but still it's a straightforward methodology.

From what we have so far, we can construct a control flow graph. 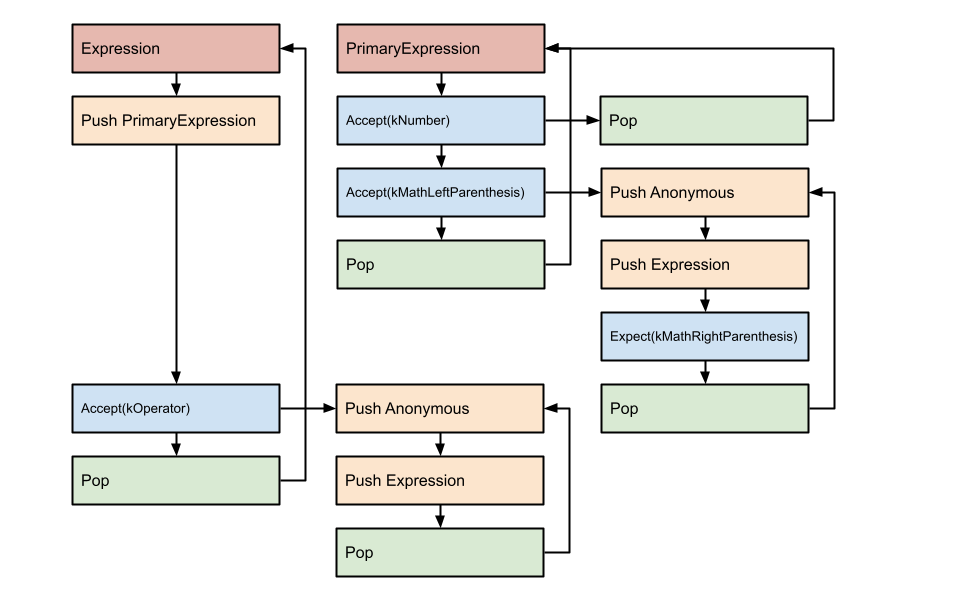 This control flow graph can be represented in code like this:

Some important observations to point out.

Essentially we can emit (or generate) following byte code for our simple but expressive grammar (and it's runnable).

We define a program as byte code and metadata.

The byte code generated from the previous example is actually an interleaved byte code and metadata stream. When loading a program the metadata identifies the symbolic names for tokens and production rules. This allows us to render a more readable representation of our grammar (not just numbers). We then proceed with a single pass through the byte code to identify the offsets associated with labels.

The above process can be made simpler if we process the byte code and replace labels with actual offsets. Effectively rewriting the program.

The byte code generated by our code generation pass is only responsible for visiting every reachable node in the control flow graph.

Since we're going to run through the byte code many times it would be nice if we could represent the byte code in a way that allows us to easily skip through byte code that isn't relevant to what we're doing.