Roasbeef released this · 2877 commits to master since this release

This release is the fith minor release for the application! Several bugs have been fixed on the backend. Additionally, the UI has received a few minimal updates and changes to the development set up have been made in order to make running multiple instances of the application easier.

NOTE: the version of lnd packaged includes a breaking change. As a result, before updating we recommend that users close out all their active channels, and also transfer any testnet coins they wish to hold onto to an external wallet before updating.

Before updating, users will need to remove all data from lnd's home data directory. This is required as there have been some breaking database changes within lnd itself. Depending on your operating system, the data directory will be found in a different location on the file system:

This release is pinned against the following commit of lnd: lightningnetwork/lnd@7bbcbc6

In order to verify the release, you'll need to have gpg or gpg2 installed on your system. Once you've obtained a copy (and hopefully verified that as well), you'll first need to import roasbeef's key if you haven't done so already:

The keybase page of roasbeef includes several attestations across distinct platforms in order to provoide a degree of confidence that this release was really signed by "roasbeef".

That will verify the signature on the main manifest page which ensures integrity and authenticity of the binaries you've downloaded locally. Next, depending on your operating system you should then re-calculate the sha256 sum of the binary, and compare that with the following hashes (which are included in the manifest file):

One can use the shasum -a 256 <file name here> tool in order to re-compute the sha256 hash of the target binary for your operating system. The produced hash should be compared with the hashes listed above and they should match exactly.

This release can also be found in roasbeef's public keybase folder.

Channel closes will now properly show a dialogue when closing an active channel for confirmations: #149

A new tab for funding your wallet directly has been added in response to user feedback: #160

We'll now display the payment description of an invoice before payment: #170 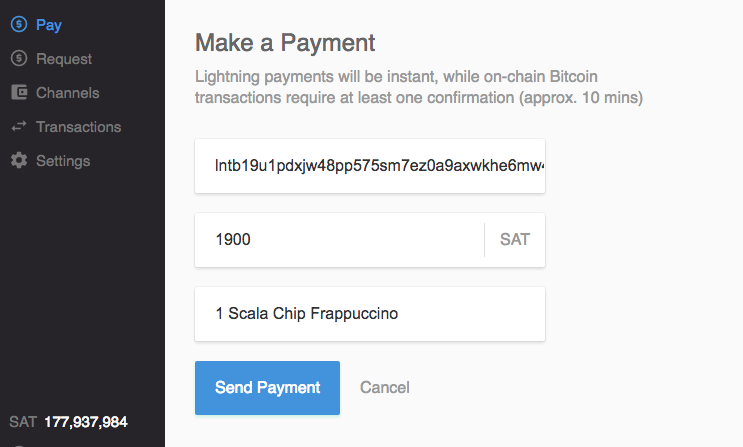 A ton of bug fixes, and updates have been made to the lnd instance that the application pins against. The biggest impact is that users should see much lower memory usage
Full details of these changes can be found here: