Fake news detection web app. Fake Bananas finished top 10 at HackMIT 2017 and won awards for 'best use of data' and 'best use of machine learning for the common good.' (Project is no longer maintained)

Fake news detection made simple and scalable for real people.

Fake Bananas finished top 10 at HackMIT 2017 and won awards for 'best use of data' and 'best use of machine learning for the common good.' 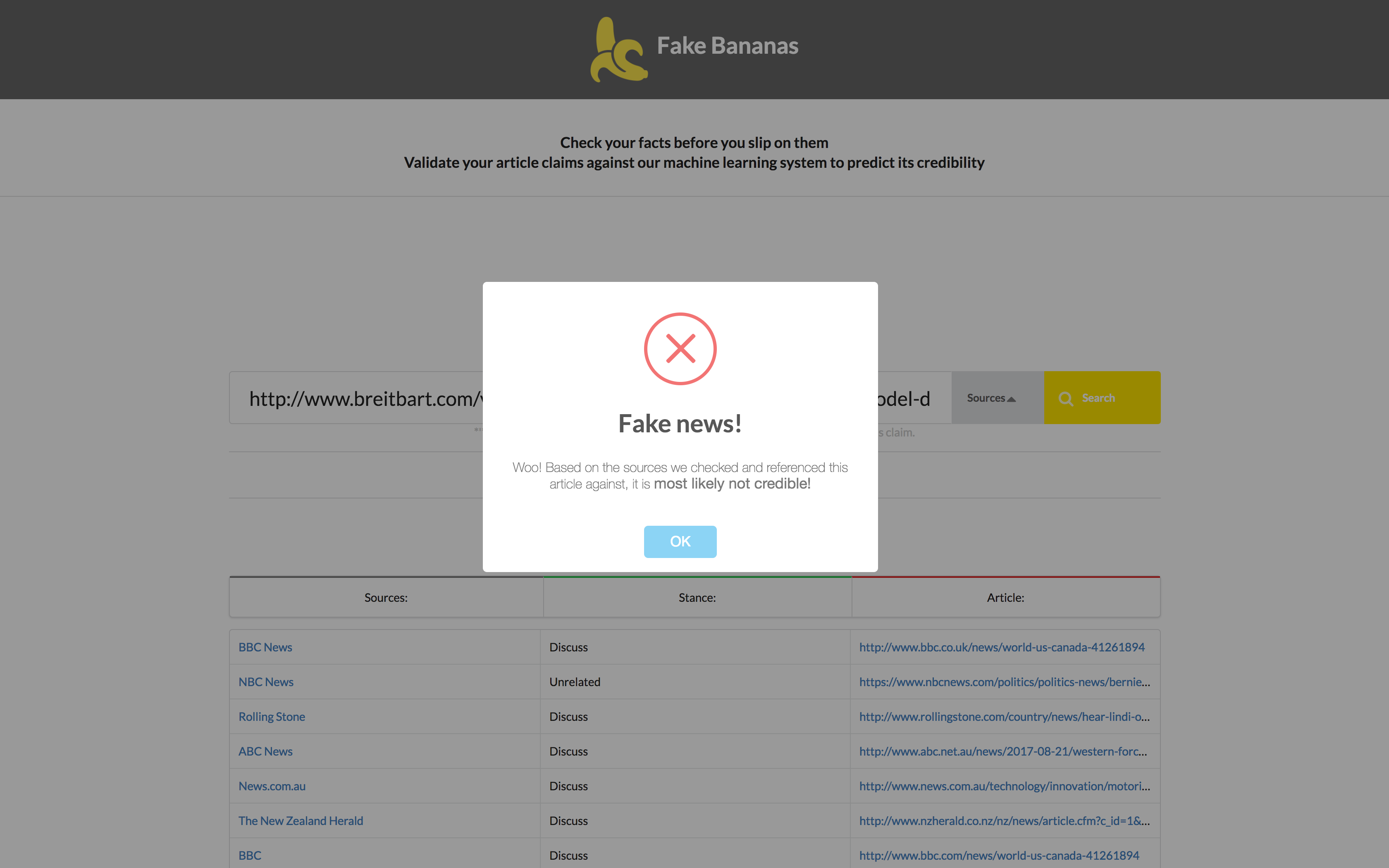 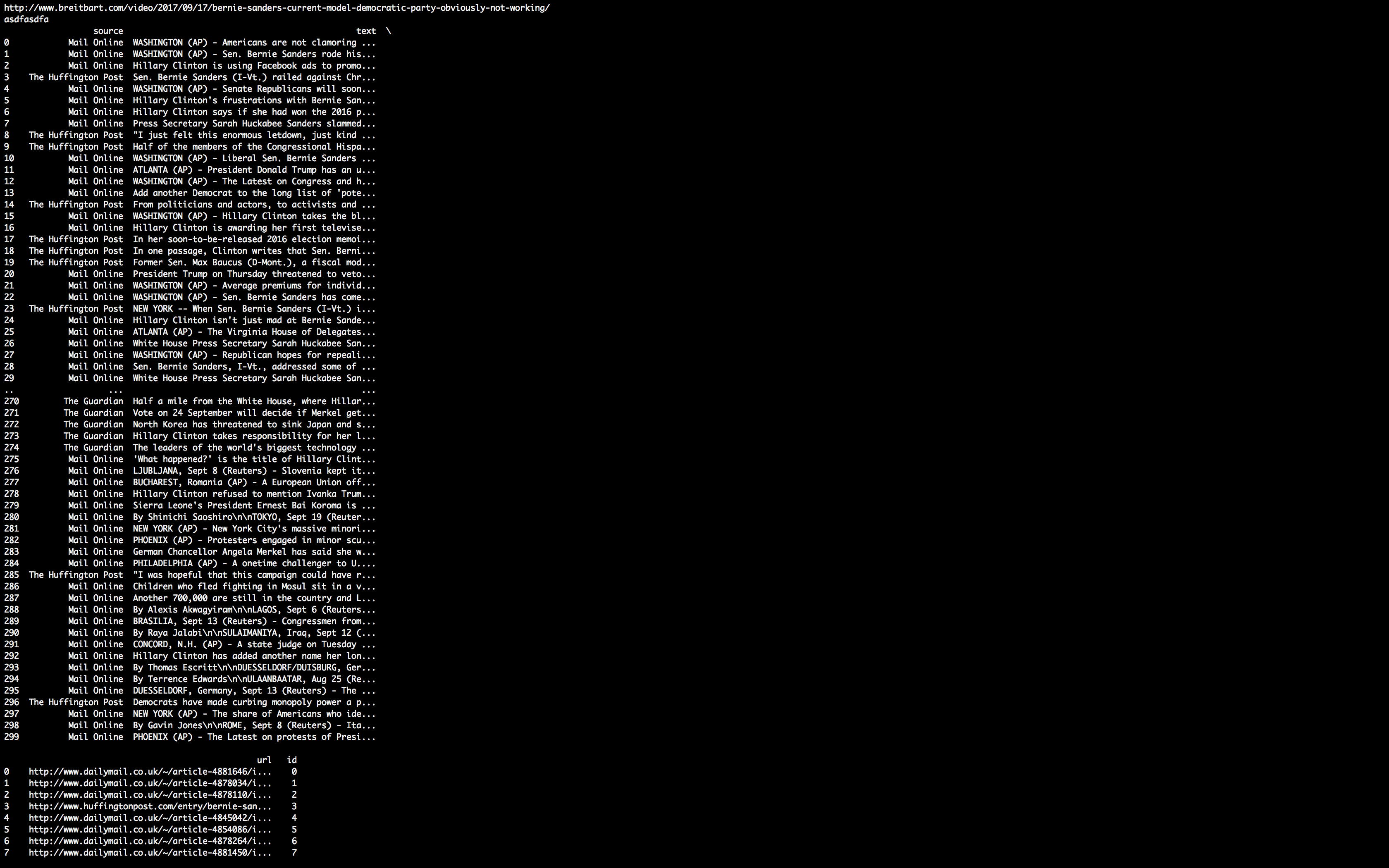 I would strongly recommend a conda environment in order to easily install our older version of TensorFlow. We used TensorFlow 0.12.1 for backwards compatibility with previous work in the field. Newer versions of TensorFlow may work, but certainly not 'out of the box'.

Our fake news detection is based on the concept of stance detection. Fake news is tough to identify. Many 'facts' are highly complex and difficult to check, or exist on a 'continuum of truth' or are compound sentences with fact and fiction overlapping. The best way to attack this problem is not through fact checking, but by comparing how reputable sources feel about a claim.

After combing through numerous newspaper and natural language processing APIs, I discovered that the best way to find related articles is by searching for keywords. The challenge was implementing a natural language processing algorithm that extracted the most relevant keywords that were searchable, and to extract just the right number of keywords. Many algorithms were simply summarizers, and would return well over 50 keywords, which would be too many to search with. On top of that, many algorithms were resource exhaustive and would sometimes take up to a minute to parse a given text.

In the end, I implemented both Microsoft’s Azure and IBM’s Watson to process, parse, and extract keywords given the URL to a news article or a claim. I passed the extracted keywords to Event Registry’s incredible database of almost 200 million articles to find as many related articles as possible.

With more time, I would love to implement Event Registry’s data visualization capabilities which include generating tag clouds and graphs showing top news publishers given a topic. -@Henry

Using a large set of default sources with hard coded reputability, our database of sources continues to become more accurate with each web scraping by adding new sources and articles. To ensure this makes our algorithm better, the weights of each source are adjusted according to how much each new article agrees or disagrees with sources determined to be reputable. In the future, we would love to implement deep learning to further advance this ‘learning’ aspect of our reputability, but the current system more than supplies a proof of concept. -@Josh

To determine if a claim is true or false, we go out and see where sources which are known to be reputable stand on that issue. We do this by leaning on established machine learning principles used for 'stance detection.' So we:

Our stance detection is run by Google's Tensorflow and our model is built off of the work of the fantastic people at University College London's (UCL) Machine Reading group. -@Kastan

Our backend is written on a Flask python server which connects to our front-end written in JavaScript.

Some teams try to train machine learning models on sets of 'fake' articles and sets of 'real' articles. This method is terrible because fake news can appear in well written articles and vice versa! Style is not equal to content and we care about finding true content.

Some teams try to granularly check the truth of each fact in an article. This is interesting, and may ultimately be a part of some future fake news detection system, but today this method is not feasible. The truth of facts exists on a continuum and relies heavily on the nuance of individual words and their connotations. The nuances of human language are difficult to parse into true/false dichotomies.

The Fake News Challenge provided great inspiration for our project and guiding principles for tackling the task.

We want to thank EventRegistry for their awesome work and generous support in providing us a trial account to their service. We couldn't have done this without their amazing database of articles.

The University of College London's short paper on the topic:

Fake news detection web app. Fake Bananas finished top 10 at HackMIT 2017 and won awards for 'best use of data' and 'best use of machine learning for the common good.' (Project is no longer maintained)