This mod includes version checking using MiniAVC (http://forum.kerbalspaceprogram.com/threads/79745) If you opt-in, it will use the internet to check whether there is a new version available. Data is only read from the internet and no personal information is sent. For a more comprehensive version checking experience, please download the full KSP-AVC plugin (http://forum.kerbalspaceprogram.com/threads/79745">KSP-AVC Plugin)

KRASH lets you launch flights from the VAB\SPH, and when the flight is over, it restores the game to the exact state that it was in before the simulation started. It handles restoring the state of any mod which stores its data in the vanilla persistence file (basically any of them worth their salt), and even handles it if you exit the game during a simulation.

There are 10 pre-defined configurations:

For both type listed above, there is also a Custom setting

In addition, you can create a customized config. See the following image for the configuration screen:

In the left column is a list of the available configs to use. An asterick indicates one of the predefined settings and can't be changed. Click on the setting you would like to see, the values will be shown on the right side

In the right half, there are two columns; The left column shows the costs for the different types: Flat, Per-part, Per-ton and Percentage, along with the Atmospheric Multipler

The right colum has the following:

Termination options if no data at the specified location(ie: Terminate at SOI, if you enter an SOI and haven't received any science data from it, the sim will terminate)

Miscellaneous Options. The max sim cost is merely a default, and can be overridden when you start the sim

In the VAB/SPH, load the ship you want to simulate Click the SIM button, you will see the following screen: 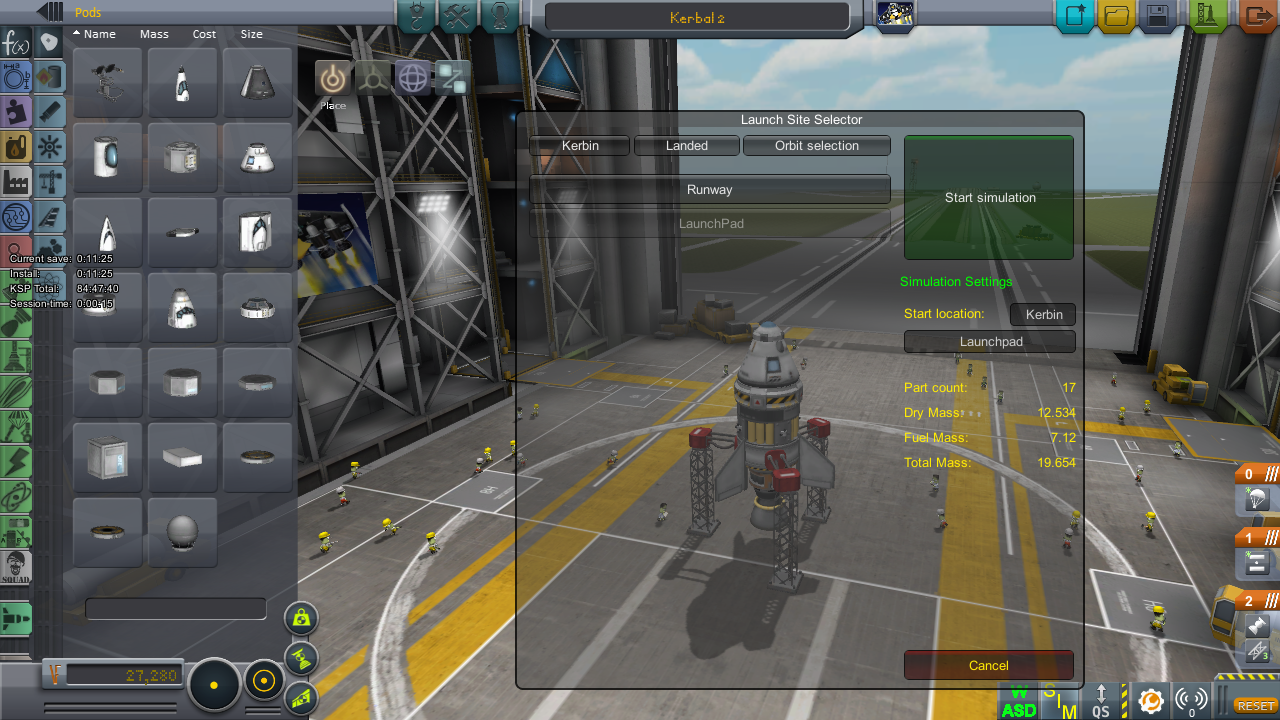 The buttons at the top select the starting location, and are as follows:

In career mode, if you haven't reached a planetary body, you won't be able to start the sim there

Starting sim at Kerbin You will be able to start the sim either at the Runway or the Launchpad. Selected which one you want,see this screen: 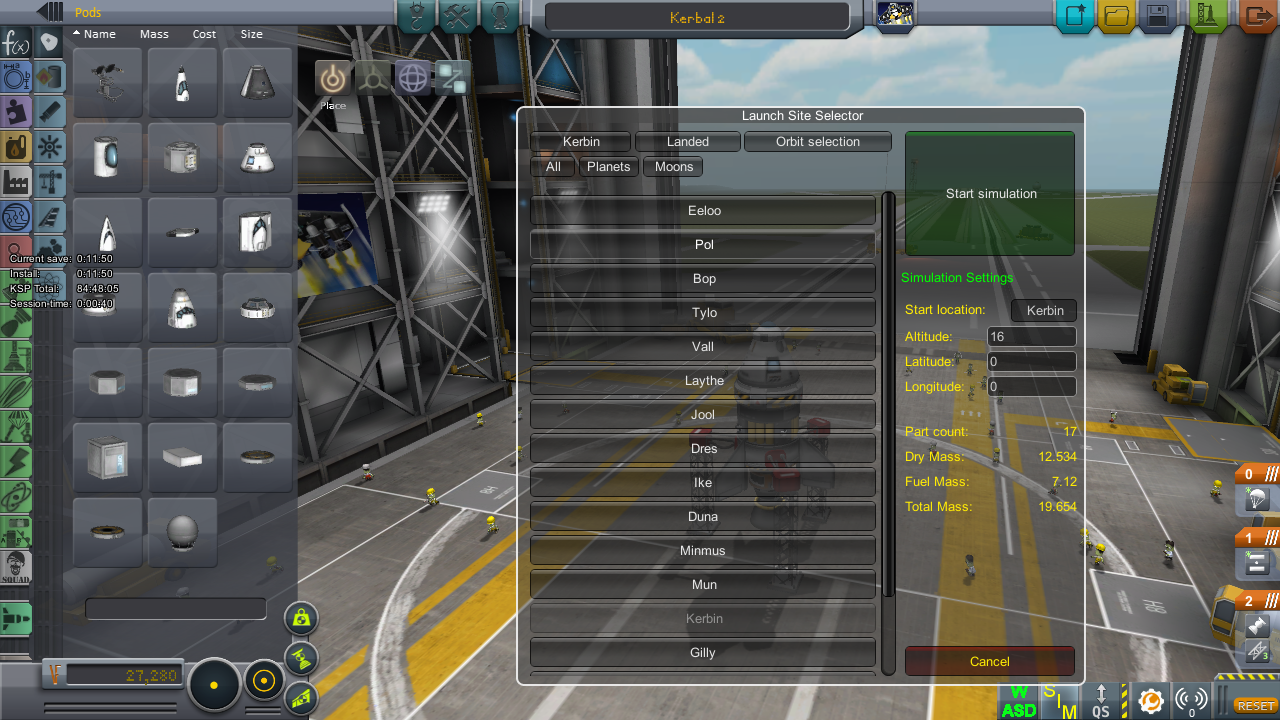 Starting sim Landed There is a row of buttons which will allow you to filter the displayed planetary bodies by either planets, moons, or all. Select the planetary body you want to start the sim at from the displayed list. Also, enter an altitude where the vessel should be started at. You can also enter the Latitude and Longitude for the starting location. It will start there, and very slowly descend until it touches the ground. See the following screen for details:

Starting sim in Orbit There is a row of buttons which will allow you to filter the displayed planetary bodies by either planets, moons, or all. Select the planetary body you want to start the sim at from the displayed list. Also, enter an altitude where the vessel should be started at. Note that when you select a body, the altitude will be automatically adjusted to be just outside the atmosphere if it has one, or at an altitude of 10000m. You can override it with whatever values you want. 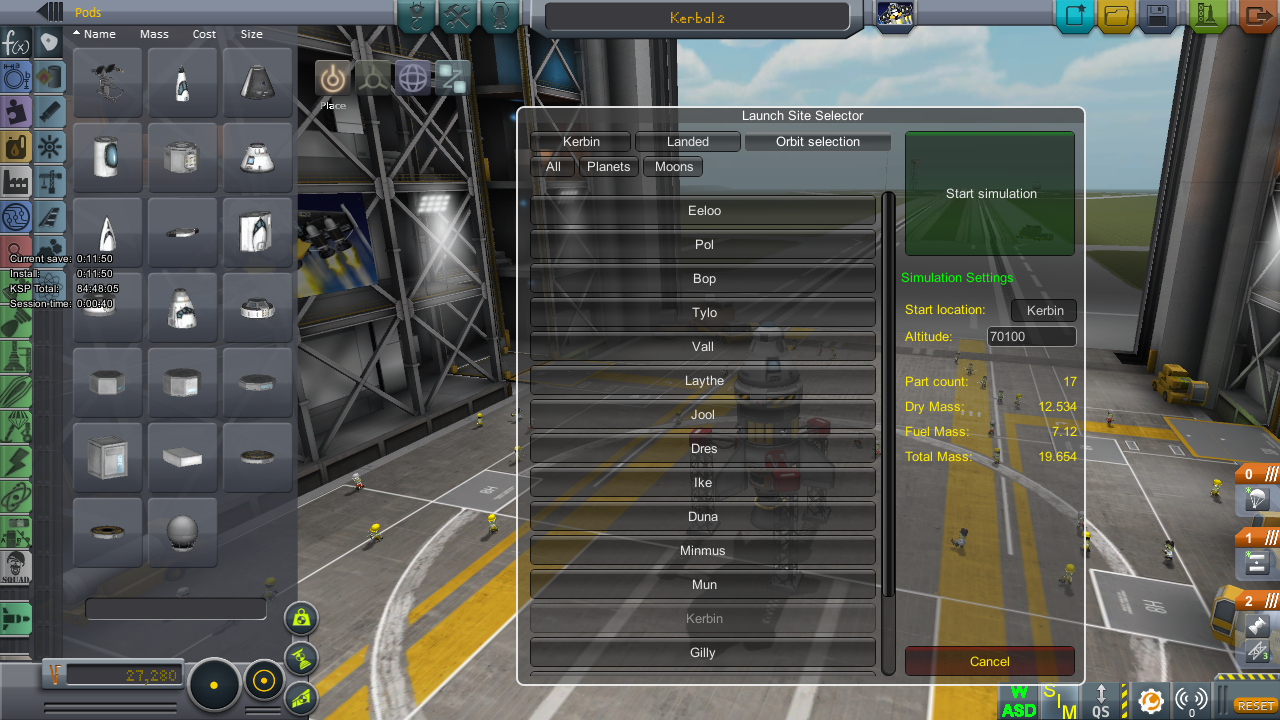 Click the big green button to start the simulation

IMPORTANT NOTE: If you are running RemoteTech, be sure that ALL your antennas are set to start retracted, otherwise they will be ripped off during the teleportation process.

During the simulation, everything works normally, except you can't go to the Space Center. Hitting the Escape key will bring up the Simulation menu, see the following screenshot: 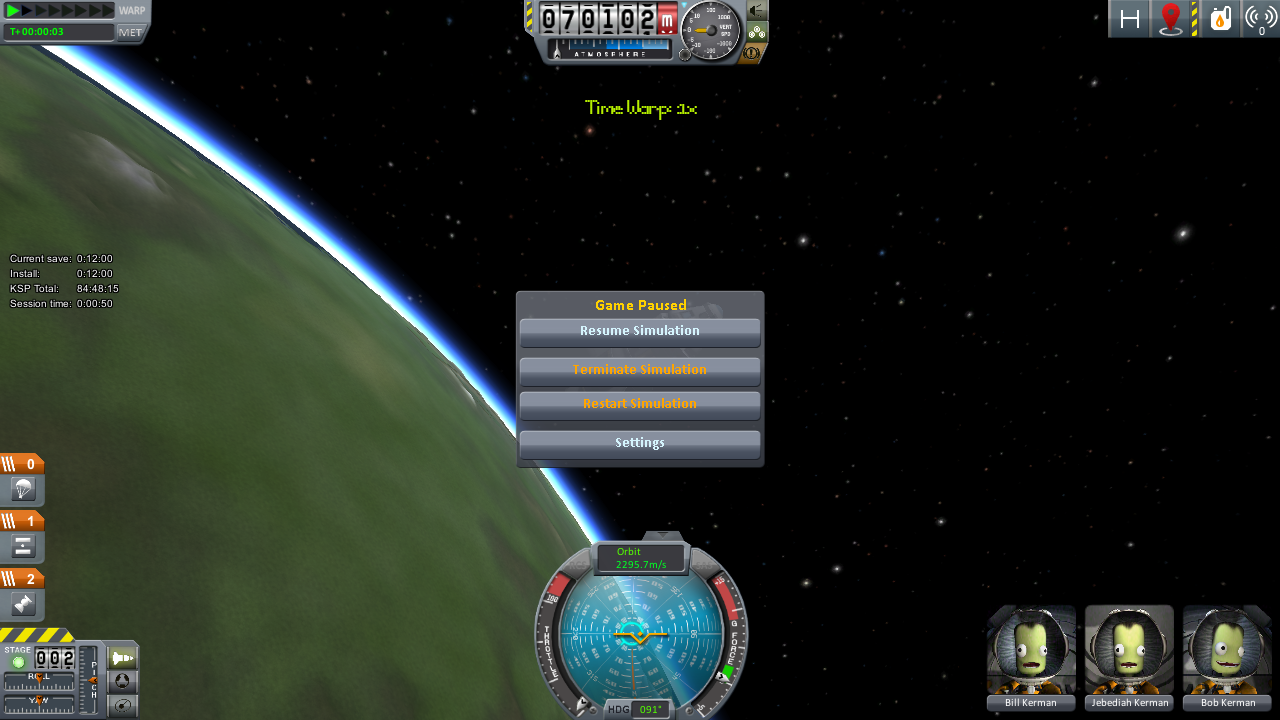 In the event of either a game crash during the simulation, or exiting the program, restarting the game will restore the game to the point just before you started the simulation.

When the simulation is terminated, you will see the usual flight history dialog before the final revert.

When playing in career mode, there is some additional functionality: