Cayman Blog is a Jekyll theme for GitHub Pages. It is based on the nice Cayman theme, with blogging features added. You can preview the theme to see what it looks like, or even use it today. 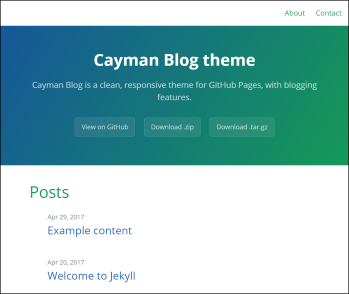 Cayman Blog Theme has been developed as a Jekyll theme gem for easier use. It is also 100% compatible with GitHub Pages — just with a more involved installation process according to whether you’re running Jekyll v3.3+ and self-hosting, or if you’re hosting with GitHub Pages.

If you’re running Jekyll v3.3+ and self-hosting you can quickly install the theme as Ruby gem:

If you’re hosting your blog with GitHub Pages you’ll have to consider this:

As stated in the official Jekyll documentation:

If you’re publishing your Jekyll site on GitHub Pages, note that GitHub Pages supports only some gem-based themes. See Supported Themes in GitHub’s documentation to see which themes are supported.

Therefore, this theme, as well as many others, can not be installed in the same way as the ones officially supported by GitHub Pages (e.g. Cayman, Minima), a bit more effort has to be put on.

The easiest way I found to install Cayman Blog Theme, is installing the theme gem, and then converting the gem-based theme to regular theme.

Alternatively, for new projects, one could fork the whole theme, and keep only the interesting files.

This method is preferred for existing Jekyll blogs, as well as newly created ones. Notice that the files index.md, about.md, contact.md will be overwritten (only index.md is really needed, the other two are just placeholders).

Install as a Fork

Cayman Blog will respect the following variables, if set in your site's _config.yml:

Additionally, you may choose to set the following optional variables:

To enable RSS feeds and also make visible an RSS feeds button in the footer, the Jekyll Feed plugin must be installed.

Add this line to your site's Gemfile:

And then add this line to your site's _config.yml:

If you are using Jekyll < 3.5.0 use the gems key instead of plugins.

Cayman Blog includes simple SEO tags from jekyll-social-metatags. Have a look at the page for its usage.

The usage is compatible with the plugin Jekyll SEO Tag, which provides a battle-tested template of crowdsourced best-practices.

To switch to a better SEO tags however, one should install Jekyll SEO Tag:

If you'd like to add your own custom styles:

Note: If you'd like to change the theme's Sass variables, you must set new values before the @import line in your stylesheet.

If you'd like to change the theme's HTML layout:

If you'd like to change the theme's Sass variables, set new values before the @import line in your stylesheet:

Templates often rely on URLs supplied by GitHub such as links to your repository or links to download your project. If you'd like to override one or more default URLs:

Note: You must remove the site. prefix, and each variable name (after the github.) should be indent with two space below github:.

See the open issues for a list of proposed features (and known issues).

The Cayman Blog theme is intended to make it quick and easy for GitHub Pages users to create their first (or 100th) website. The theme should meet the vast majority of users' needs out of the box, erring on the side of simplicity rather than flexibility, and provide users the opportunity to opt-in to additional complexity if they have specific needs or wish to further customize their experience (such as adding custom CSS or modifying the default layout). It should also look great, but that goes without saying.

Interested in contributing to Cayman Blog? We'd love your help. Cayman Blog is an open source project, built one contribution at a time by users like you. See the CONTRIBUTING file for instructions on how to contribute.

If you'd like to preview the theme locally (for example, in the process of proposing a change):

The theme contains a minimal test suite, to ensure a site with the theme would build successfully. To run the tests, simply run script/cibuild. You'll need to run script/bootstrap once before the test script will work.