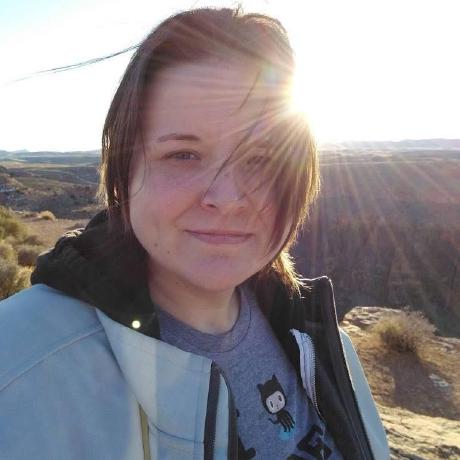 Little Bit About Me

I love coffee, electronic music (BT, Underworld, Royskopp), 80s music, gin, video games (Assasins Creed, animal crossing), and was a super SCSS nerd back in the day. I am attempting to learn to play the bass guitar but failing at it pretty terribly. My husband Shannon and I have been married for 3 years and we have a cat roommate, Oen, who tolerates us.

I am from the NJ shore but spent my life moving around the country starting in 1997 when I moved to the bay area during the first tech bubble to be a "webmaster" for a small web-based software company. I relocated to Las Vegas with the company in 2001 and lived there for 5 or so years. I moved to Maryland in 2006 and helped raise my nieces for about 7 years and spent my time freelancing and working with small companies to build MVP Rails apps. In 2012 I moved to DC and started working at LivingSocial as a front-end developer in internal tools. I started at GitHub on April 1, 2013, working remotely from DC. A year later I moved to SF and worked for a year out of the headquarters and finally moved back to Vegas on April 1, 2015. In 2022, after almost 9 years, I left GitHub to take on an engineering leadership role with CargoSense where I am focusing on growing and supporting the best software engineering teams.

My first priority is always moving forward and getting things done. It is not that I think my other values aren't as important, but having come through my job history of a bunch of failed companies and consulting gigs, the take away was if you aren't showing progress (shipping is one aspect, but also unshipping and making decisions) you don't have the opportunities and support to build great teams.

I think poor communication tends to be the core of most problems. It is usually a result of fear (giving someone critical feedback that they won't like, not wanting to ask questions and feel stupid, etc) or when people don't take the time to verify that everyone is on the same page (when in doubt verify and repeat!) and are operating without a shared understanding.

I think trust and honesty come hand in, you can't have trust without honesty and it takes trust to be honest. I value coming to a relationship with trust and a genuine belief that we are all trying to do our best work and that even in disagreements they are done with the best of intent without maliciousness. Part of this trust also comes between our teams and our leadership to deal with situations where the above is not true in a fair and swift manner.

974 contributions in the last year