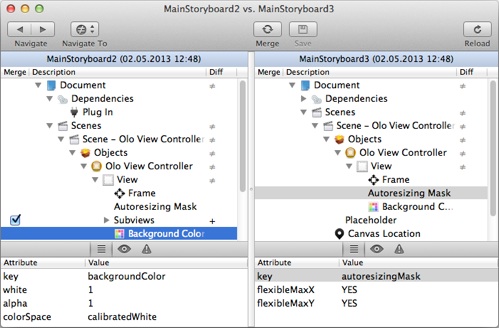 Storyboard diff and merge tool which:

The storyboarding is a new UI design feature introduced with the Xcode 4.2 which allows to describe all the application’s UI in one file. This very handy mechanism has one major drawback. Because all the UI lives in one file, the whole UI design process is very prone to revision control conflicts. Moreover, the Xcode standard merging mechanism treats storyboard files like ordinary text files which further complicates merging. The StoryboardMerge solves those problems.

After setting all checkboxes click Merge. You will see the merged storyboard in a right panel.

The StoryboardMerge will validate a new storyboard and mark in red incorrect elements.

Click Save to write a new storyboard or override the old one.

How to use as a git mergetool

Edit your ~/.gitconfig file and add the following section:

Copy storyboard-merge into /usr/local/bin and make it executable:

When a storyboard conflict occurs:

Which will give you the following prompt in your terminal:

Hit return to accept the default (as defined in your ~/.gitconfig above.) Which will launch StoryboardMerge and give you the following prompt in your terminal:

When your merge is complete, press the StoryboardMerge 'save' toolbar icon, which will save the file to the proper place, then return to your terminal and type 'y' to accept the merge. (Or 'n' if something went wrong and you'd like to start over.)

After merging I'd recommend opening the file in Xcode and verifying everything is okay and to allow it to rewrite any changes is sees fit before committing your changes.