CleanDiff is a better diffing tool, that's easier on your brain.

(A better way to diff)

CleanDiff removes the unnecessary noise from diffs so that your brain can focus on the important bits.

Pass it any two files, or use it in conjunction with git diff or git difftool

Imagine you add a few words to a file, then want to see the diff. The screenshot below shows how nigh-impossible it is to see what's changed when you use diff. Kaleidoscope definitely improves on the situation, but CleanDiff makes it even clearer. 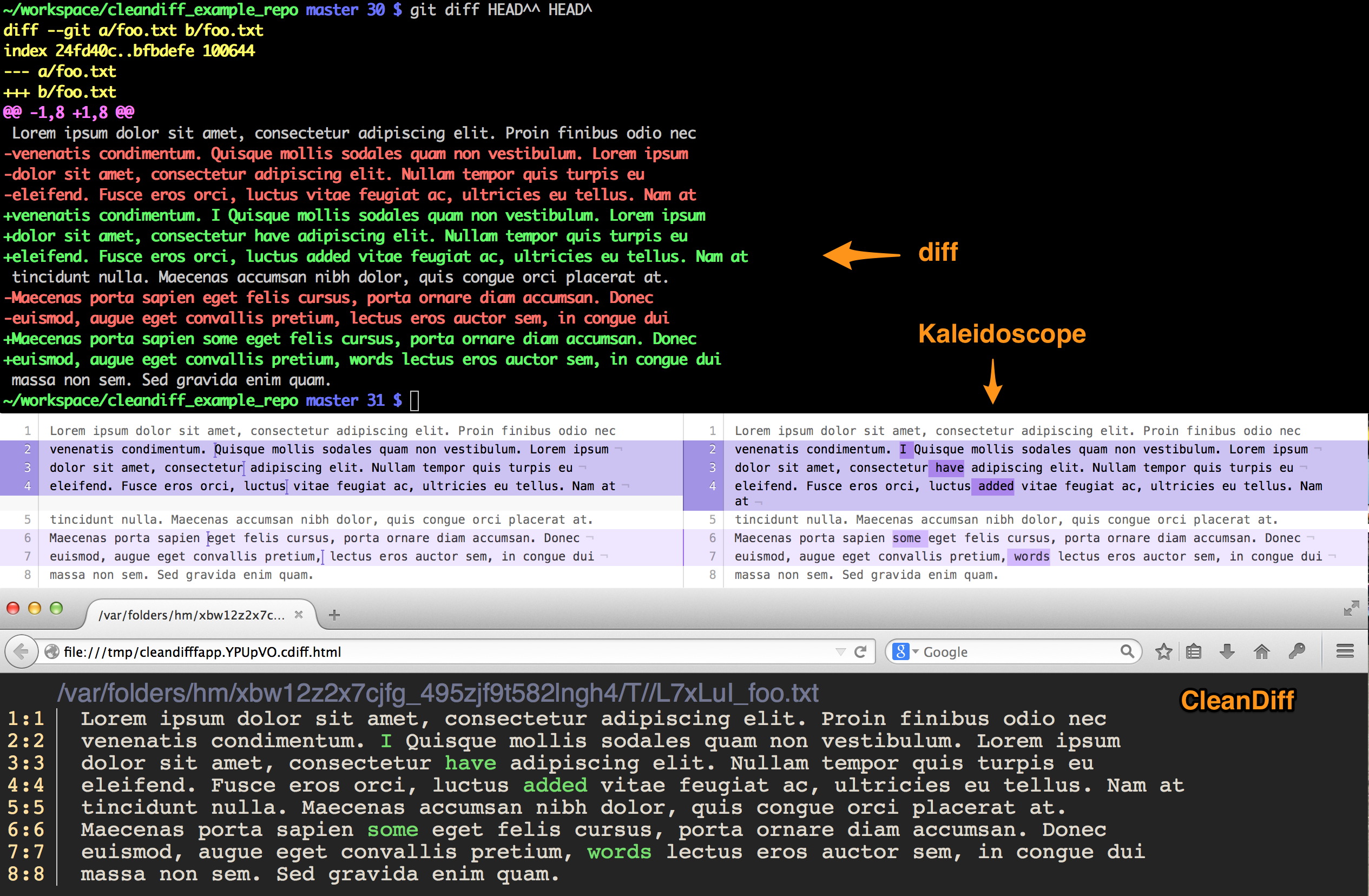 (as opposed to just adding it)

CleanDiff can show you what's been removed, in addition to what's been added. In the example below I changed a couple words in the previous text. The output from diff and Kaleidoscope look very similar to the screenshot above.

This app, while stable, and safe, is still rough around the edges. It should work fine on OS X and Linux, but not Windows.

CleanDiff currently requires 2 *nix utilities which most of you are unlikely to have installed: dwdiff and aha. On OS X we'd recommend you install them via Homebrew.

Linux people should use whatever the package manager is for your distro.

Next up, fork this repo, then clone it locally:

and add the cdiff executable to your $PATH.

Please note. The Term::AnsiColor gem installs a script called cdiff at /usr/bin. If you've installed this then you'll want to make sure that cleandiff's directory comes before /usr/bin in your path, or just get rid of their cdiff because really, why would you need it when you've got this?

You can View CleanDiff changes in Fenestro if you're a mac user. Otherwise you'll need to view it's output in your favorite browser.

By Default it will attempt to load its changes in Firefox.

To change the browser: edit ~/config/cdiff/cdiff1.sh and add BROWSER=MyFavoriteBrowser Whatever you enter will be called with open -a $BROWSER path/to/cdiff_output.html

You'll also need to tell git how to use it as a graphical difftool.

Configuring your favorite browser
At the bottom of the cdiff file you'll see some comments about Chrome, Safari, Firefox. Uncomment / tweak the one that makes you most smiley.

First we need to enable filetype detection so that it'll automatically recognize .cdiff files (and thus enable us to auto-colorize them).

To do this just run the integration/vim_setup.sh script which will add a line to your ~/.vim/filetypes.vim and create a ~/.vim/ftdetect/cdiff.vim file.

Next install the Colorizer Plugin and add this to your ~/.vimrc

Now that you've got Vim configured to handle files with ANSI escape codes, and it knows how to detect .cdiff files, you'll want to uncomment the appropriate line at the bottom of our cdiff script.

Note / Rant
Unfortunately, when using this with git difftool it will open a new window for every file you're diffing, which sucks.

There's no real way to determine if your receiving one request for diffs in a series, or just one request, but in the future we can work to hack a solution by queueing up the requests to vim (and other editors) if they happen with very little time in between.

If you've got a better solution, please file an issue or Pull Request.

Instructions to follow as soon as an Emacs geek tells us how. ;)

And if you haven't done it already you'll really want to disable the prompting, because it's really annoying.

Pretty much the same as diff, only without any options.

If you've configured it as your default difftool then all you need to say is:

If you have not configured it as your default difftool then it's not very different. Just add in the --tool option like this:

CleanDiff is a better diffing tool, that's easier on your brain.