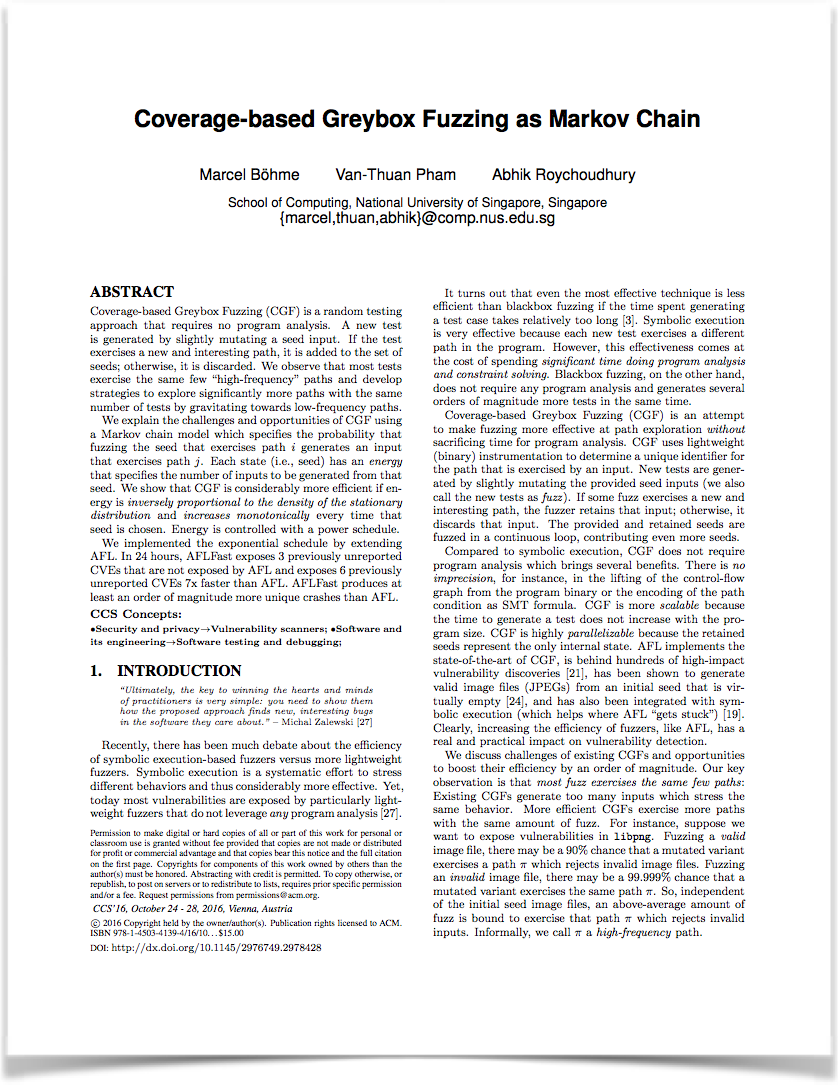 Power schedules implemented by Marcel Böhme <marcel.boehme@acm.org>. AFLFast is an extension of AFL which is written and maintained by Michal Zalewski <lcamtuf@google.com>.

AFLFast is a fork of AFL that has been shown to outperform AFL 1.96b by an order of magnitude! It helped in the success of Team Codejitsu at the finals of the DARPA Cyber Grand Challenge where their bot Galactica took 2nd place in terms of #POVs proven (see red bar at https://www.cybergrandchallenge.com/event#results). AFLFast exposed several previously unreported CVEs that could not be exposed by AFL in 24 hours and otherwise exposed vulnerabilities significantly faster than AFL while generating orders of magnitude more unique crashes.

We find that AFL's exploitation-based constant schedule assigns too much energy to seeds exercising high-frequency paths (e.g., paths that reject invalid inputs) and not enough energy to seeds exercising low-frequency paths (e.g., paths that stress interesting behaviors). Technically, we modified the computation of a seed's performance score (calculate_score), which seed is marked as favourite (update_bitmap_score), and which seed is chosen next from the circular queue (main). We implemented the following schedules (in the order of their effectiveness, best first):

More details can be found in our paper that was recently accepted at the 23rd ACM Conference on Computer and Communications Security (CCS'16).

PS: The most recent version of AFL (2.33b) implements the explore schedule which yielded a significance performance boost. We are currently conducting experiments with a hybrid version between AFLFast and 2.33b and report back soon.

PPS: In parallel mode (several instances with shared queue), we suggest to run the master using the exploit schedule (-p exploit) and the slaves with a combination of cut-off-exponential (-p coe), exponential (-p fast; default), and explore (-p explore) schedules. In single mode, the default settings will do. EDIT: In parallel mode, AFLFast seems to perform poorly because the path probability estimates are incorrect for the imported seeds. Pull requests to fix this issue by syncing the estimates accross instances are appreciated :)