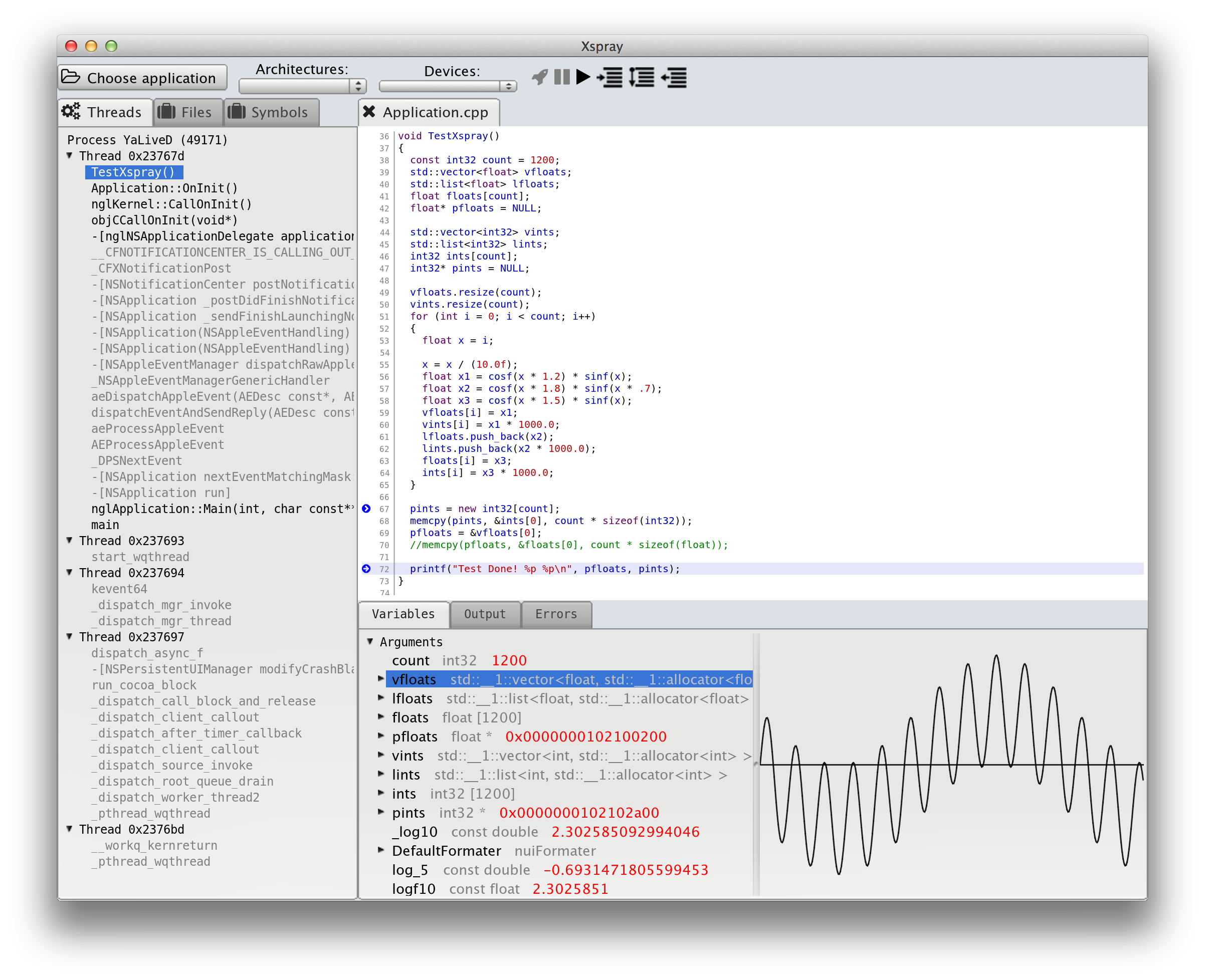 About one year ago I took some time experimenting with creating a new GUI for lldb. My idea was to build a debugger that permits to deeply inspect data at runtime. As a developer it is often very frustrating to the IDE stop in the code and not be able to really inspect variables that are big containers (beyond a dozen of floats…). When I deal with real time audio, image processing, video, maths, etc., not having access to a more visual representation of my data often makes my life miserable. I also would like to have a complete set of tools to analyse my data: compute the average, the sum, the first derivative of a big vector of float can be life saving. So I started to toy with lldb on the Mac and I developed a prototype to see if my idea was feasible. LLDB is an absolutely amazing project (along with LLVM and Clang…) and developing a simple plotter that can inspect std::vector and std::list at runtime was relatively easy on OSX (and the answers I got to my newbie questions on the lldb-dev mailing list have been very helpful too!). Making it work with an iOS target proved much harder as there is very little documentation about how Xcode and iTunes installs application and start the debugger there. After much trial an error I succeeded to have that working too. The next idea was to build a complete GUI for LLDB that would work on Android too: native debugging on that plateform is a pure nightmare of horrible scripts and arcane command line instructions. Unfortunately lldb was not at all able to gdb-remote a linux host (even x86 gdb-remote didn’t work at all at the time) and an android debugserver implementation seemed out of question. Which is really a shame as I’m pretty sure game developers (for exemple) would love to have a full blown debugger on that platform. (and one with the features I envisioned would be really very cool…). So I stopped working on it (also I was running out of free time).

Unfortunately, I haven’t had much time to really touch my prototype since september 2013 as after giving the idea some thoughts I haven’t found compelling proof that I could make a living by selling this kind of software (nobody wants to launch a separate debugger from Xcode right?). But I thought it was too bad to have all that code lying there doing nothing and helping nobody. So I have decided to release this small prototype as an open source project on github: http://github.com/meeloo/Xspray.

Some features are not plugged in the UI yet (iOS devices that were already plugged at startup don’t show up in the UI for exemple). And the UI in itself is far from looking like a finished product, it not even alpha grade in my opinion, but it works.

Here is a list of some of the features that I wanted to add one day (and I might do it one day):

To build Xspray on OSX you need llvm, clang and lldb.

Setting up the folders for correct dependencies:

Change to the directory where you want to do development work and checkout LLDB:

Alternatively if you are not using ssh authentification try:

You will also need swig installed. I got it view brew:

Note1: Beware! If you have installed Xcode 5 and you are trying to build with Xcode 4, chances are the system svn will be v1.7 while Xcode 4 is still 1.6 and it will prevent the build script from fetching llvm and clang sources. If thats the case, use the svn binary that is inside the Xcode bundle like that:

Note2: I have found that we don't need to use a special cryptographic certificate as the lldb mentions, using the default Mac Developper cert will work fine on any machine. YAY! For that change, select the LLDB project in Xcode, then select the lldb_gdbserver target and look for the code signing section. Change all lldb_codesign to your own Mac OS Developper certificate.

In general, building the LLDB trunk revision requires trunk revisions of both LLVM and Clang but the Xcode project takes care of this directly.

So just change the Active Scheme to LLDB and command+B to build LLDB and all its dependencies (llvm, clang...). It will probably complain about already existing folder but ignore these errors. Sometime I have compilation errors because my LLDB and LLVM/Clang are desynchronized. When this happens I haven't found another solution: I just checkout a fresh LLDB to replace the current broken one.

You can now launch the Xspray workspace in Xcode, it is located in WORK/Xspray/Xspray.xcworkspace

Select the LLDB scheme and edit it to change the default configuration to release. Build LLDB (go have a cup of coffe, it will svn checkout llvm + clang and build them, then build itself, it takes a while). Or watch the all the Lord of the rings movies a couple of times. Once it is built without error (hopefully) you can select the Xspray target and build it. It should produce a valid Mac application bundle that contains a valid lldb framework (and libclang.dylib).

Warning: for now, the executable I do my tests on is hardcoded in the MainWindow.cpp. Edit it out to point to an existing debugable executable on your machine.