Written on 2012.05.02 to explain the motivation for a sweeping round of changes to the way MU works, and to provide a bit of historical background

For two years, Mendicant University has been an ambitious social experiment in education for software developers. Although we have mostly conducted our work in private, we have maintained a continuous focus on working on projects that benefit the public in various ways. This page provides some historical background on how that has served us well in the past, but also shows why our future requires a significant change in our overall strategy.

The private nature of our program helped us create a safe and welcoming microcosm of the open source software development world, in which learners could thrive together. This close-knit and small community helped us establish deeper social connections that helped us create a culture that emphasizes the value of meaningful work in software development, rather than just focusing on improving our vocational skills. Although we did our work in private, we continuously pushed work out there into the public through various contributions to open source projects. For a long time, this "private workspace, public works" model served us well.

Our ambition has also served us well over the last two years. Our core skills course alone has served as a powerful example of what can be accomplished in just a few weeks time when you get a handful of smart and motivated people together. As we moved beyond that course to focus on other ways of learning and contributing to the world, we did a ton more work that has had a positive impact both on the software development world as well as the lives of real people in need. Over the course of two years, we have had something like 10000-15000 person-hours committed to Mendicant University's projects, which is nothing short of amazing.

If you add up the work done in a single core course, it tallies over 1000 hours. The graphic below outlines how quickly the different tasks involved in one of those courses adds up: 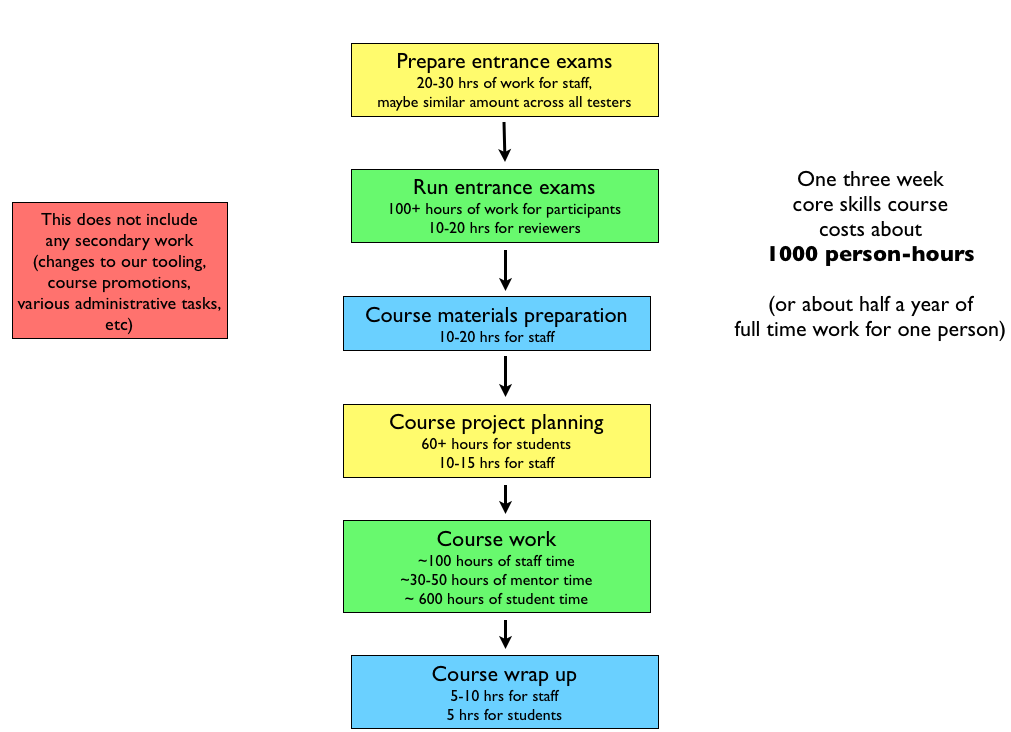 When you think about the fact that we have run a total of 11 of these courses, and several others for our alumni, all running on top of infrastructure that we built and maintained as a group of volunteers, it really is quite remarkable. However, in recent times it has become clear that our strengths are also our weaknesses. While it may be hard to stare into our own shadow, it is something that must be done if we wish to truly thrive in the end.

The ambitious nature of our initiatives have made them both complicated to understand, and highly costly to commit to. As a result, fewer and fewer people tend to participate in new projects, even if the number of folks who want to stay involved in MU in some way remain high. People tend to participate when it is easy and well defined to do so, but it rarely ends up being that way. The increasing complexity over time has also given rise to a fair amount of accidental (or organic) bureaucracy, and that only makes this problem worse.

Take for example the way that we plan our projects. Typically, the idea starts with Gregory, and he may jot down some notes or roll the idea around in his head for several iterations before discussing it with Mendicant's co-founders, Jordan and Jia. Then, the three of them may go back to the drawing board several times before sharing the idea with the rest of Mendicant's staff (Andrea, Shane, and Eric). From there, further iteration happens until we feel comfortable enough to share it with a handful of alumni who we feel are active and in regular contact with us. From there, we will finally announce the ideas to the whole group, where it will be iterated on even more before being announced to the public. On some occasions, this process results in as much as a 6-12 month lapse before an idea gets acted upon. For a group of folks who value agility and find bureaucracy odious, this tendency is ridiculous!

The reasons for us acting this way are well intentioned: we want to not waste time and resources of our community discussing ideas that we may never act on. However, it has become clear that this way of working is slowly killing this school. In particular, our ability to still achieve high quality output despite the practice makes it hard for our community members to even notice that this problem exists. However, this is a direct result of brute force effort and not skillful management. In acting this way, we are perpetuating something that Mendicant is supposed to be directly opposed to: a culture of heroic death marches similar to what you'd find in failing startups. Because we are a private group, we can't easily enlist the help of others for small, ad-hoc actions, and so as our overall engagement dwindles, the weight of this kind of workflow gets heavier and heavier on the handful of folks who have been steering the ship.

What is clear to us is that our community still is strong in many ways and still wants to help us move Mendicant University forward. But now that we are far beyond our early days of being a fast-moving, lightweight project, it becomes harder and harder for people to help us steer a complicated and slow moving juggernaut. Rather than letting Mendicant die a slow death, or worse, become some sort of monolith, we must change. That is exactly what we plan to do, and this is how we plan to do it.