Recently, Nathan Marz introduced the Lambda Architecture for realising large-scale data processing applications. In this article, we will walk step-by-step through how to build an application based on this architecture: The UberSocialNet (USN), a little helper tool that allows us to keep track of where we know people from.

The USN lets us record if we happen to know someone from either the digital world, that is, social networks such as Twitter, Facebook, LinkedIn, G+, etc. or the real life. The goal is that USN can serve more than one billion users while providing low-latency access to the annotations we keep about where and how we know people.

The raw data resides in the data/ directory and has the following shape in the base (CSV) format:

with the following schema:

All fields are always present, that is, there are no optional fields. The test data has been generated using generatedata.com in five runs totaling some 500 rows of raw data.

Generation of the Layers

First, I'm going to show you the three commands you have to run to generate the two layers (batch and serving) of the USN app and then we will have a closer look behind the scenes of each of the commands.

To build the datastore for USN, run the following commands:

1. To pre-process the raw data, in the data dir:

2. To build the batch layer, with the Hive Thrift service running, in the batch-layer dir:

3. To build the serving layer, with both the Hive and HBase Thrift service running, in the main USN dir:

As you now have an idea what to do, we will have a closer look at each of the steps and see what is going on exactly in the next subsections.

Make sure you have Hive 0.10.0 installed or access to a setup (cluster, cloud) where it is running.

The raw data is first pre-processed and loaded into Hive like so:

So to pre-process the raw data, change into the data directory and execute the following:

Then, to build the batch layer from scratch, perform the following steps.

Make sure Hive service is running from the USN batch layer directory:

And finally, from within the batch-layer directory:

Now the batch layer is generated and available in HDFS. Next we will build the serving layer in HBase.

Make sure you have HBase 0.94.x installed or access to a setup (cluster, cloud) where it is running.

Preparation First you need to launch HBase and the HBase Thrift server.

Go to the HBase home directory ($HBASE_HOME) and do the following:

Also, make sure that the Hive service is running. In case you've shut it down after the batch layer generation, restart it. So, from the USN batch layer directory do:

Init First you need to initialize the USN table.

Change to the parent directory of the batch layer directory and execute the following:

You can use the HBase shell to verify if the serving layer has been initialized correctly:

The above query translates into: give me all acquaintances of Ted in the LinkedIn network, starting from January 2013 on.

You can have a look at some more queries used in the demo user interface on the respective Wiki page.

Oh. And when you're done, don't forget to shut down HBase (again, from HBase home):

The Hive service can simply be stopped by hitting CTRL+C.

You're now done with generating the necessary layers for the USN app and can start using it. I'll show you how in the next section.

The following components and tools are assumed to be available:

Then, the pre-processing steps as explained above (batch and serving layer generation) must be done.

After you've prepared and init the batch and serving layers as described above you can launch the user interface, a simple CLI for now. Make sure that HBase and the HBase Thrift service (details, see above) are running, then, in the main USN directory do the following:

The three main operations the USN front-end provides are:

All artifacts in this repository, including data and code are donated into the Public Domain. The author would like to thank MapR Technologies for sponsoring the work on the USN app.

In the following some notes and background information that is not necessary to toy around with USN but might be of interest for the one or the other.

The demo app USN is intentionally kept very simple. Though fully functional, the USN app has a number of serious limitations. You're welcome to fork it and extend it. Please let me know if you do so.

The HBase table usn_friends, used in the serving layer to drive the USN app has the following schema: 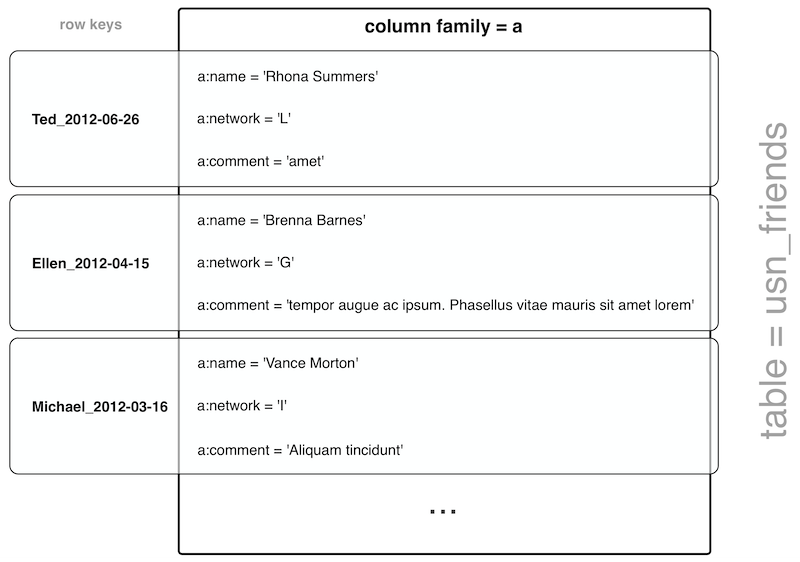 Some notes regarding the key and schema design: 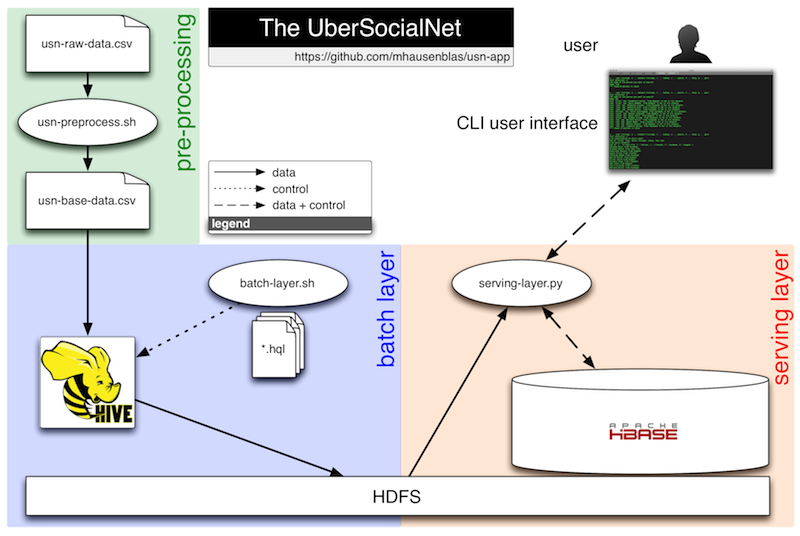 Some notes regarding architecture: