There are many ways to contribute to the Visual Studio Code project: logging bugs, submitting pull requests, reporting issues, and creating suggestions.

After cloning and building the repo, check out the issues list. Issues labeled help wanted are good issues to submit a PR for. Issues labeled good first issue are great candidates to pick up if you are in the code for the first time. If you are contributing significant changes, or if the issue is already assigned to a specific month milestone, please discuss with the assignee of the issue first before starting to work on the issue.

In order to download necessary tools, clone the repository, and install dependencies via yarn, you need network access.

In case of issues, try deleting the contents of ~/.node-gyp (alternatively ~/.cache/node-gyp for Linux, ~/Library/Caches/node-gyp/ for macOS, or %USERPROFILE%\AppData\Local\node-gyp for Windows) first and then run yarn cache clean and then try again.

If you are on Windows or Linux 64 bit systems and would like to compile to 32 bit, you'll need to set the npm_config_arch environment variable to ia32 before running yarn. This will compile all native node modules for a 32 bit architecture. Similarly, when cross-compiling for ARM, set npm_config_arch to arm.

Note: For more information on how to install NPM modules globally on UNIX systems without resorting to sudo, refer to this guide.

Docker / the Codespace should have at least 4 Cores and 6 GB of RAM (8 GB recommended) to run the full build. See the development container README for more information.

If you'd like to contribute to the list of available development containers in the Remote - Containers extension, you can check out the Contributing documentation in the vscode-dev-containers repo.

If you're a community member, feel free to jump over this step.

Otherwise, if you're a member of the VS Code team, follow the Commit Signing guide.

If you want to understand how VS Code works or want to debug an issue, you'll want to get the source, build it, and run the tool locally.

NOTE: If you need to debug the 32bit version of VS Code on 64bit Windows, follow the guide on how to do that.

First, fork the VS Code repository so that you can make a pull request. Then, clone your fork locally:

Occasionally you will want to merge changes in the upstream repository (the official code repo) with your fork.

Manage any merge conflicts, commit them, and then push them to your fork.

Note: The microsoft/vscode repository contains a collection of GitHub Actions that help us with triaging issues. As you probably don't want these running on your fork, you can disable Actions for your fork via https://github.com/<<Your Username>>/vscode/settings/actions.

Install and build all of the dependencies using Yarn:

Then you have two options:

The incremental builder will do an initial full build and will display a message that includes the phrase "Finished compilation" once the initial build is complete. The builder will watch for file changes and compile those changes incrementally, giving you a fast, iterative coding experience.

Errors and warnings will show in the console while developing VS Code. If you use VS Code to develop VS Code, errors and warnings are shown in the status bar at the bottom left of the editor. You can view the error list using View | Errors and Warnings or pressing Ctrl+P and then ! (CMD+P and ! on macOS).

👉 Tip! You don't need to stop and restart the development version of VS Code after each change. You can just execute Reload Window from the command palette. We like to assign the keyboard shortcut Ctrl+R (CMD+R on macOS) to this command.

To test the changes, you launch a development version of VS Code on the workspace vscode, which you are currently editing.

Web (Chromium, Firefox or Safari only)

You can use --port, --host and --scheme to further instruct the simple server that runs for the web version about your environment (e.g. if you want to test the web version over a network).

You can identify the development version of VS Code ("Code - OSS") by the following icon in the Dock or Taskbar:

👉 Tip! If you receive an error stating that the app is not a valid Electron app, it probably means you didn't run yarn watch first.

VS Code has a multi-process architecture and your code is executed in different processes.

The render process runs the UI code inside the Shell window. To debug code running in the render you can either use VS Code or the Chrome Developer Tools. 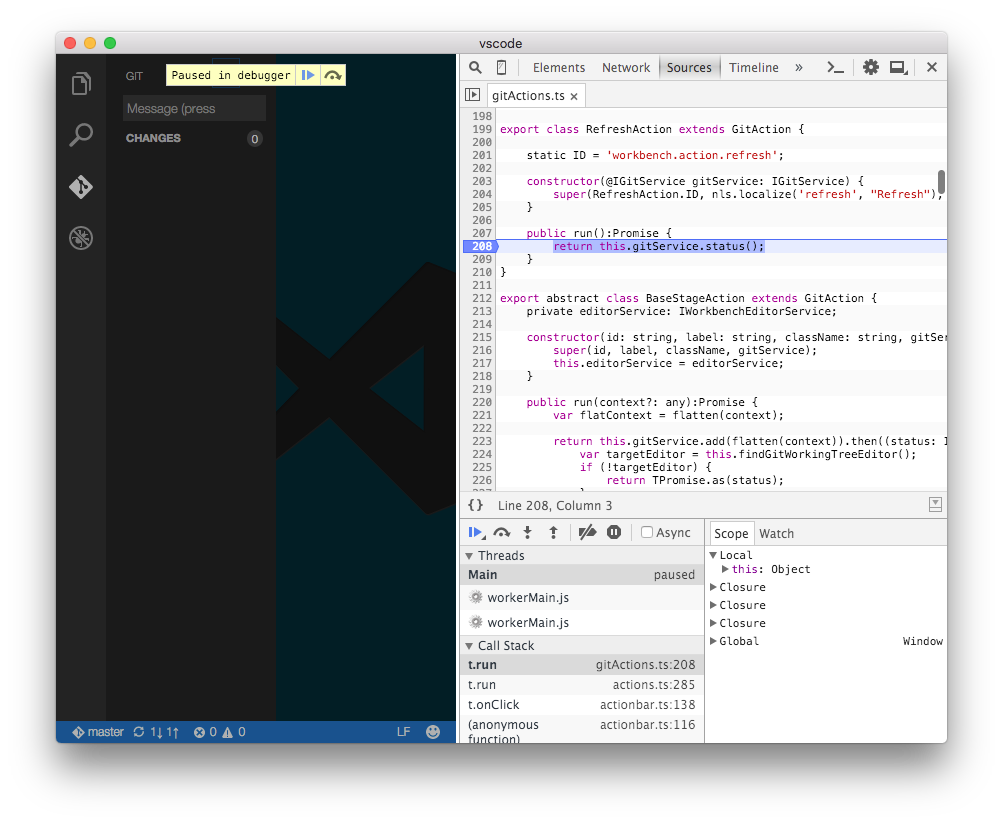 The search process can be debugged, but must first be started. Before attempting to attach, start a search by pressing Ctrl+P (CMD+P on macOS), otherwise, attaching will fail and time out.

Run the unit tests directly from a terminal by running ./scripts/test.sh from the vscode folder (scripts\test on Windows). The test README has complete details on how to run and debug tests, as well as how to produce coverage reports.

We also have automated UI tests. The smoke test README has all the details.

Run the tests directly from a terminal by running ./scripts/test.sh from the vscode folder (scripts\test on Windows). The test README has complete details on how to run and debug tests, as well as how to produce coverage reports.

We use eslint for linting our sources. You can run eslint across the sources by calling yarn eslint from a terminal or command prompt. You can also run yarn eslint as a VS Code task by pressing Ctrl+P (CMD+P on macOS) and entering task eslint.

To lint the source as you make changes you can install the eslint extension.

The Visual Studio Marketplace is not available from the vscode open source builds. If you need to use or debug an extension you can check to see if the extension author publishes builds in their repository (check the Builds page) or if it is open source you can clone and build the extension locally. Once you have the .VSIX, you can "side load" the extension either through the command line or using Install from VSIX command in the Extensions View command drop-down (see more on command line extension management).

Even if you have push rights on the Microsoft/vscode repository, you should create a personal fork and create feature branches there when you need them. This keeps the main repository clean and your personal workflow cruft out of sight.

Before we can accept a pull request from you, you'll need to sign a Contributor License Agreement (CLA). It is an automated process and you only need to do it once.

To enable us to quickly review and accept your pull requests, always create one pull request per issue and link the issue in the pull request. Never merge multiple requests in one unless they have the same root cause. Be sure to follow our Coding Guidelines and keep code changes as small as possible. Avoid pure formatting changes to code that has not been modified otherwise. Pull requests should contain tests whenever possible.

Introducing usage of new Electron API with a PR

A pull request that depends on Electron API that VS Code is currently not using comes with a certain risk and may be rejected. Whenever we update Electron, there is a chance that less popular Electron APIs break and it is very hard to find out upfront. Once a PR lands in VS Code, the role of maintaining the feature moves to the team and as such we have to follow up with upstream components to ensure the feature is still supported. As such, as a rule of thumb:

Check out the full issues list for a list of all potential areas for contributions. Note that just because an issue exists in the repository does not mean we will accept a contribution to the core editor for it. There are several reasons we may not accept a pull request like:

To avoid multiple pull requests resolving the same issue, let others know you are working on it by saying so in a comment.

These gulp tasks are available:

We're also interested in your feedback for the future of VS Code. You can submit a suggestion or feature request through the issue tracker. To make this process more effective, we're asking that these include more information to help define them more clearly.

We accept feedback on translations in language packs via GitHub issues in our localization repo that contains our currently supported language packs.

In order to keep the conversation clear and transparent, please limit discussion to English and keep things on topic with the issue. Be considerate to others and try to be courteous and professional at all times.

Want to contribute to this Wiki?

Fork it and send a pull request.