This sample demonstrates how to use the MIRACL iOS SDK in order to transfer an identity from and to another device without the need of another customer verification. This is done by the so-called bootstrap codes and there are two cases depending on what the user wants to achieve.

The flow called Bootstrap Code Generation represents the case when there is already a registered identity on the device and the user wants to transfer it on another device:

The flow called Bootstrap Code Registration represents the case when the user creates a new identity on the device using an already generated bootstrap code from another device: 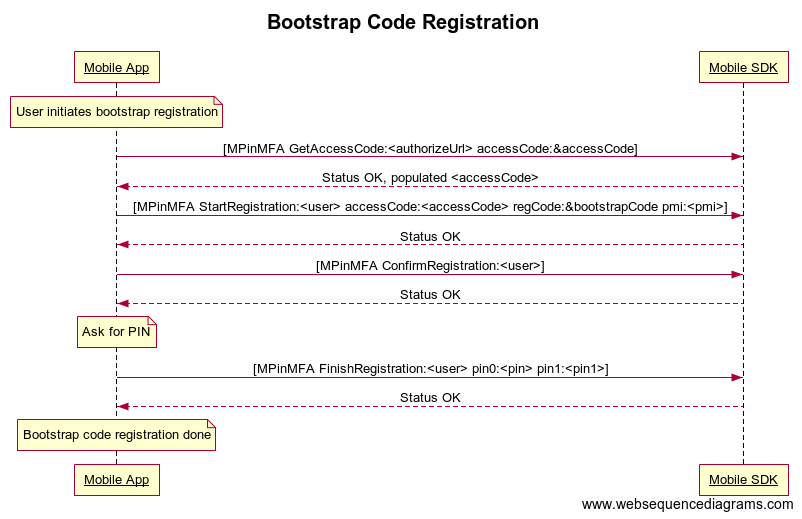 Keep in mind, that the bootstrap codes are currently available only for enterprise users. If you wish to make use of them, please contact us at support@miracl.com.

In order to be able to test the demo iOS app, you need to run a backend service as a relying party demo web app (RPA). The demo app should authenticate to the MIRACL Trust authentication portal, called also MFA, using OpenIDConnect protocol. More information could be found here. This means you need to login and create an application in the portal and use its credentials (client id and client secret) in the demo web app for the communication.

For the case of that sample, there is one more endpoint the RPA should implements as it is done at this sample RPA project:

Once you have run the demo web app you need to host it on a visible uri for the mobile app. Just be sure that the proper redirect uri (constructed as demoAppUri/login) is added as a redirect uri to the authentication portal application settings you're running this web app with:

Before building an iOS app, you need to configure it through the Config.m file:

Since most of the Miracl iOS SDK methods are long-term operations, it is recommended to be called on background queue with NSOperationQueue or Grand Central Dispatch. You could see this pattern through the sample application.

All of the work is done at RegCodeRegistrationViewController which is presented when Code Generation tab is clicked.

When you run the demo there are two buttons on the screen:

Choosing Select User and selecting an already registered identity from the list displays the following information:

You can see that there are three buttons - Select User, Register New User and Generate Code. If you want to move the selected user identity to another device, press Generate Code button. Then [MPinMFA StartAuthenticationRegCode:] method is called which kicks-off the authentication process:

If the MPinStatus of the operation is OK, an alert view for the user PIN is presented:

The user needs to enter their PIN and the SDK method [MPinMFA FinishAuthenticationRegCode:pin:pin1:regCode] is called to finalize the authentication process:

Here, if registration for the bootstrap code is successful, an object reference is passed to registrationCode object which is displayed to the user, so they can enroll it in another device:

To register with a bootstrap code, the user needs to go to a device where they already have an identity created. You could use either another mobile app with an already registered identity, or the backend configured for this demo sample. Here we describe the second choice with running our dotnet SDK sample as a backend.

Go to the login identity screen of your backend and click on the settings icon of an already registered identity. There is an option called Enroll a New Device:

Keep in mind that if you don't see Enroll a New Device option, you are not an enterprise user. If you need this functionality, contact us at support@miracl.com.

Enroll a New Device requires authentication and asks you for your PIN. Then it displays the bootstrap code you need to use in your mobile device to transfer the identity to your phone.

Back to this demo sample, there is a Register new User button which needs to be clicked to initiate the identity transfer. The logic about this is in the RegCodeAuthenticationViewController file.

First, an access code needs to be obtained by the getAccessCodeWithCompletionHandler: method where an HTTP POST request is made to the endpoint defined in [Config authzUrl].

Then, it needs to be verified if it doesn't already exist with [MPinMFA IsUserExisting: customerId:appId:] method. Finally, a user can be created with [MPinMFA MakeNewUser:deviceName:] method:

When the user is created, registration can be started with a call to [MPinMFA StartRegistration: accessCode:regCode:pmi:]:

If MPinStatus value of the registration is OK, an alert view is prompted to the user to create a PIN code for their new identity on this device:

and alert is presented to show the user they have already a registered identity on that device: