This sample demonstrates how to use the MIRACL iOS SDK in order to login into the mobile app itself using MIRACL MFA Platform authentication via an iOS device. This is the so-called Mobile App Login and here is the methods sequence you need to achieve it: 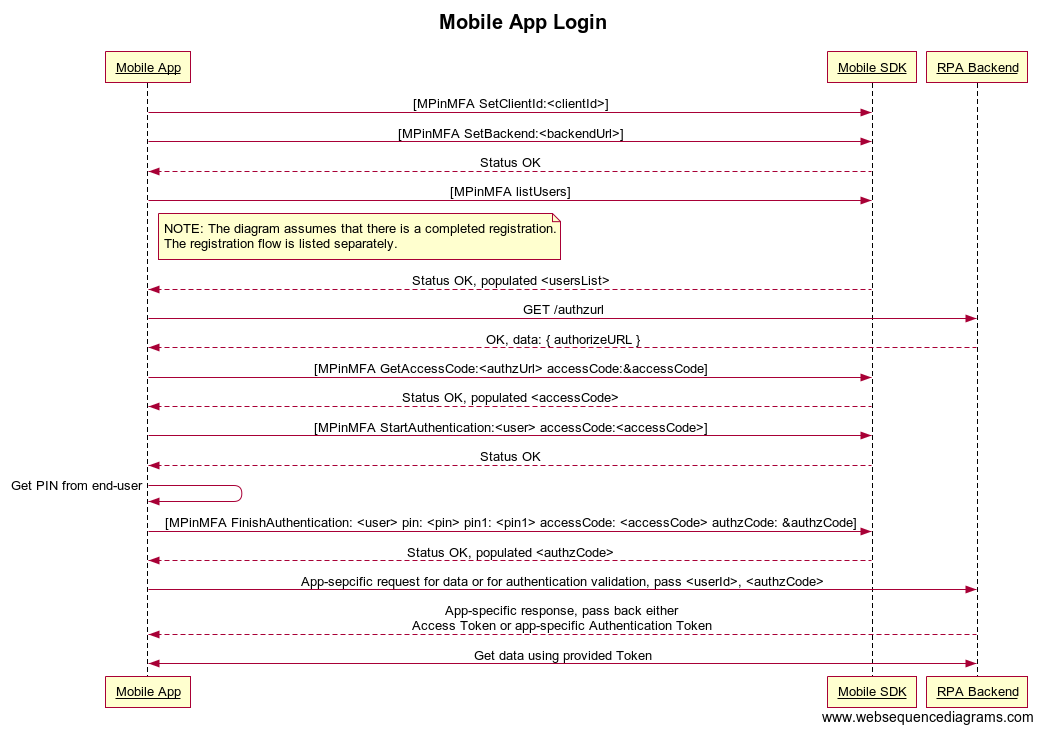 Create a demo web app to act as a backend service

In order to be able to test the demo iOS app, you need to run a backend service as a relying party demo web app (RPA). The demo app should authenticate to the MIRACL Trust authentication portal, called also MFA, using OpenIDConnect protocol. More information could be found here. This means you need to login and create an application in the portal and use its credentials (client id and client secret) in the demo web app for the communication.

For the case of that sample, there are two more endpoints the RPA should implements as it is done at this sample RPA project:

The http status code of the response could correspond to the status of the authentication. A sample could be seen here.

Once you have run the demo app you need to host it on a visible uri for the mobile app. Just be sure that the proper redirect uri (constructed as demoAppUri/login) is added as a redirect uri to the authentication portal application settings you're running this web app with:

Before building the iOS app, you need to configure it. In Xcode, open the Config.m file and fill in the placeholders as follows:

Note that authBackend should always be https://api.mpin.io in order to authenticate against MIRACL Trust authentication portal.

backendDomain, backendPort and httpScheme are parts from the url of your demo RPA configured here.

Initial user registration process is managed in the RegisterViewController.m. Initially when the screen is displayed several SDK methods are executed within the viewDidLoad method. First the SDK is initialized through the [MPinMFA initSDK] method. Then the SDK needs to be setup with the Authentication Server by the Company ID (using [MPinMFA SetClientId:]). For improved security [MPinMFA AddTrustedDomain:] is also called:

Note: Since most of the Miracl iOS SDK methods can be time-consuming operations, it is recommended to be called on background queue with NSOperationQueue or Grand Central Dispatch. You could see this pattern through the sample application.

Then in viewWillAppear the authentication API uri is set (using [MPinMFA SetBackend:]):

If mpinStatus.status has value OK the next step is to obtain access code. This is done in the getAccessCode method where an HTTP POST request is made to the endpoint defined in [Config authzUrl]. This request returns JSON as a response from where we get the authorizeURL:

If mpinStatus.status has value OK this means that the access code has been successfully obtained.

In viewWillAppear an SDK call to [MPinMFA listUsers] is made and if it returns more than one user then all of users need to be deleted as the demo is designed to work with one user. This means that the [MPinMFA DeleteUser:] method will be called to remove all users:

If there is one user then it is important to check the value of [self.user getState]. If it is INVALID or BLOCKED (see all user state values) then the user is deleted with SDK call to [MPinMFA DeleteUser:].

To start the registration the user is first asked to enter their email:

Once the user fills in their email and presses Submit the following code is executed:

Note that, for demonstration purposes, the deviceName variable is statically set here but it could be determined by user's requirements.

If the registration was started successfully, a confirmation message is sent to the user's email in order to verify their identity registration. After the email verification, they need to click the Confirmed button. The user also has options to select Delete or Resend Email. Pressing Delete will result in SDK call to [MPinMFA DeleteUser:] and the flow will need to start over sending the user back to the first screen. Pressing Resend Email will delete the currently created user and create a new user object with the same identity. Consecutively [self.user getIdentity] will be called and the result will be kept as a temporary reference to the user's identity as that user is about to be deleted. After that [MPinMFA DeleteUser:] is called to delete the user. This is followed by a SDK call to [MPinMFA MakeNewUser: deviceName:] where the saved identity is passed as first parameter. Finally [MPinMFA StartRegistration: accessCode: pmi:] SDK call is made which triggers a new confirmation message to be sent to the user's email:

Once the user presses the Confirmed button, a SDK call to [MPinMFA ConfirmRegistration:] is made:

When the user enter their PIN number and presses Send, the onClickSendButton method is called where [MPinMFA FinishRegistration: pin0: pin1:] is called:

If mpinStatus.status has value OK then the registration is finished and the user is presented with SuccessfulViewController.m:

Pressing the Login button will send the user to the previous screen where they need to press the back navigation button (located in the top left part of the screen) again to return the RegisterViewController.m. This time RegisterViewController will find the registered user within the viewWillAppear method and display the information for that user. Relevant information for the registered user is obtained by its getState, getBackend, getIdentity and getCustomerId methods:

The user will see the following UI:

If the user decides to press the Delete button this will result in a call to [MPinMFA DeleteUser:] and the flow will need to start over as there will be no registered user to log in with.

If the user presses the Login button then the authentication process will begin for that user:

If mpinStatus.status has value OK the user will be presented with PinPadViewController to enter their PIN number. After entering the PIN number and pressing Send the - (IBAction)onClickSendButton:(id)sender method of PinPadViewController.m is called which will now detect that a PIN is being entered for a registered user (the value of [self.user getState] needs to have value of REGISTERED) which will result in a call to [MPinMFA FinishAuthentication: pin: pin1:]

If mpinStatus.status has value OK the strAuthzCode will contain a non-empty authorization code. The next step is to use that strAuthzCode to make an HTTP POST request to the url defined in [Config authCheckUrl]. If the HTTP Status code in the response is 200 this means that the login is successful which also marks the end of the flow and the user will be presented with a popup message to indicate that:

Pressing Start over will send the user back so they can log in again with the same user.

It is worth mentioning that RegisterViewController.m executes multiple roles within the demo. It shows the registration UI if there are no users. It will also show the appropriate UI in order to confirm a started registration. And finally, it will show the information for an existing registered user allowing login for that user.

The purpose of this view controller is to collect a PIN number from the user and handle it. First, within the viewWillAppear method, the current user is loaded with a call to [MPinMFA listUsers]: