This sample demonstrates how to use the MIRACL iOS SDK in order to login into a MIRACL Trust-enabled website using MIRACL MFA Platform authentication via an iOS device. This is the so-called MFA Platform Login flow and here is the methods sequence you need to achieve it: 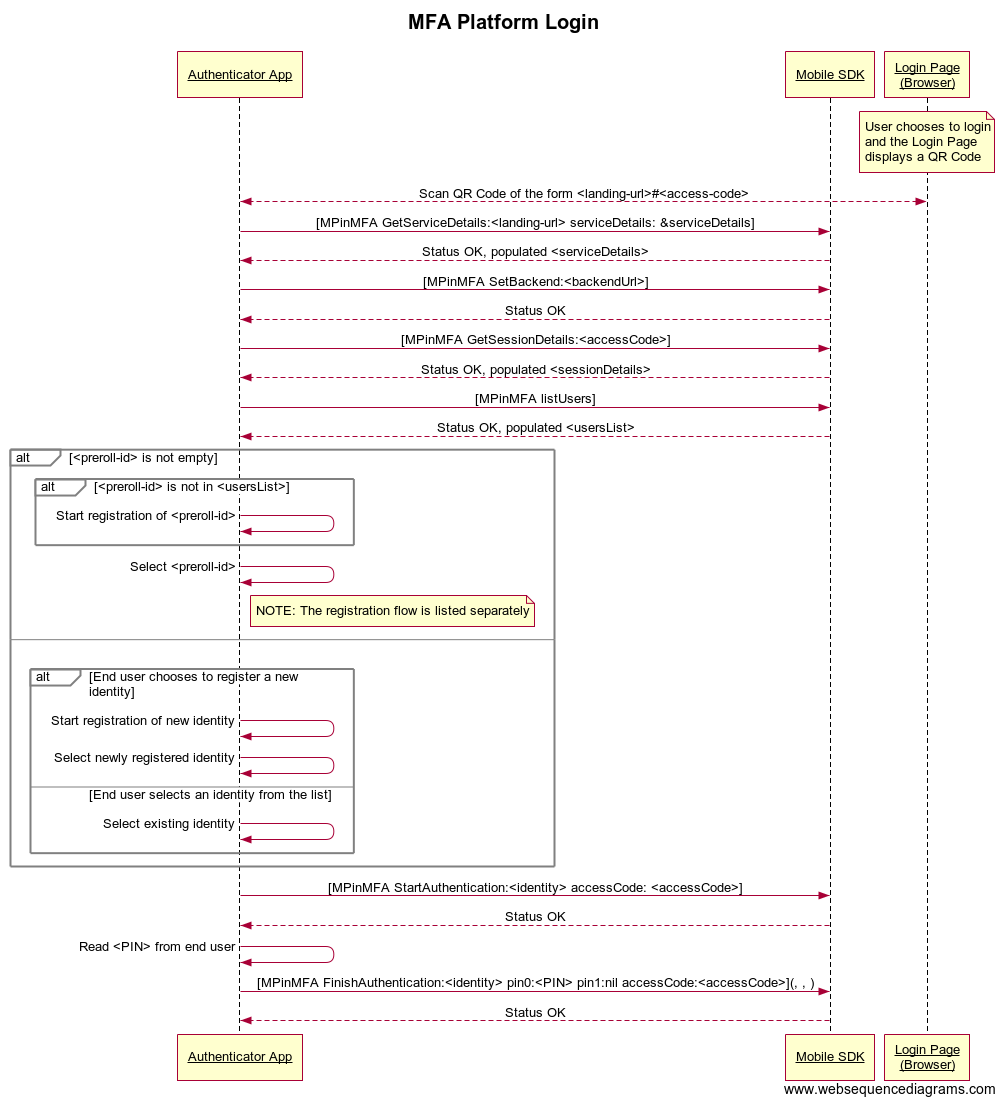 In order to be able to test the demo iOS app, you need to run a backend service as a relying party demo web app (RPA). The web app should authenticate to the MIRACL Trust authentication portal, called also MFA, using OpenIDConnect protocol. This means you need to login and create an application in it so you can take credentials (client id and client secret) for the communication. Sample ones could be found here. Note that the redirect URL set in this MFA web application needs to match your demo web application, concatenated with /login by default.

Before building an iOS app, you need to configure it through the Config.m file:

In the trustedDomains method, you need to add the URL of your demo RPA configured here.

This is the first screen the user sees as a part of the demo. First, the SDK is initialized through [MPinMFA initSDK]. Then the SDK needs to be setup with the Authentication Server by the Company ID (using [MPinMFA SetClientId:]). For improved security [MPinMFA AddTrustedDomain:] is also called (note that this is an optional step):

Note: Since most of the Miracl iOS SDK methods can be time-consuming operations, it is recommended to be called on background queue with NSOperationQueue or Grand Central Dispatch. You could see this pattern through the sample application.

When the app is first loaded and launched on your phone the QR reader will be displayed. Click on the Login button of your web browser app:

Then a QR code appears and you can scan it with your phone:

Once the information from the QR code has been read within - (void)parseResponse:(NSString *)strResponse, the access code, and the base url are obtained from the qr-read URL. This is followed by an HTTP GET request to the /service endpoint located at the base url to get the service details. Note that there is a SDK method [MPinMFA GetServiceDetails: serviceDetails:] available which does the same thing and it should be used instead. If there is an error in the returned response it will be displayed (considered errors are HTTP Status codes 412, 406 or general JSON parsing errors).

After the service details are obtained the SDK sets its authentication API URI by [MPinMFA SetBackend:] method using them:

An optional step, not included in the demo is to make an SDK call to [MPinMFA GetSessionDetails:]. This can be used to obtain the preroll id if needed.

If the value of mpinStatus.status is OK, then the next step is to check if any users are available. This is done in the - (void)onSetBackendCompleted:(NSString *)accessCode method. The list with available users is obtained via SDK call to [MPinMFA listUsers]:

If there are no saved users the user will be redirected to RegisterViewController in order to create a new user. For simplicity of the sample app, it is designed to work with the first user from the list:

Depending on the [user getState]:

When the user is in REGISTERED state, a call to [MPinMFA StartAuthentication: accessCode:] needs to be made. This sends the user instance and the access code to the MFA server in order to start the authentication process:

If mpinStatus.status has value OK then the PinPadViewController will be presented to the user to enter their PIN number so they can finalize the authentication.

The purpose of this view controller is to either create a new user registration or facilitate the completion of a started registration. First in the - (void)viewWillAppear:(BOOL)animated method [MPinMFA listUsers] is called to check if any users are available.

If no users are available then the user will be shown a form to fill in their email in order to start a new registration:

Once the user enters their email and taps on the Submit button the - (IBAction)onClickAddmButton:(id)sender is called. First, the email will be validated and if validation fails an error message will be shown. Then the app will check if there already is a user with the desired email by making an SDK call to [MPinMFA getIUserById:]. If there is such user an error message will be shown. If all validations pass then the app will try to create a new user (via SDK call to [MPinMFA MakeNewUser: deviceName:]) and start a new registration (via SDK call to [MPinMFA StartRegistration: accessCode: pmi:]):

Note that, for demonstration purposes, the deviceName variable is statically set here but it could be determined by user's requirements.

If mpinStatus.status has value OK this means the identity was created and the user will be presented with the following UI:

The message utilizes a call to the [self.user getIdentity] method in order to display the information. If the registration was started successfully, a confirmation message is sent to the user's email in order to verify their identity registration. After the email verification, they need to click the Confirmed button which will result in a call to the - (IBAction)onClickConfirmButton:(id)sender method. There the app will check if the email confirmation is successful by calling [MPinMFA ConfirmRegistration:]:

If mpinStatus.status has value OK this means that the user confirmed their identity by following the link from the email they received. The next step is to present the PinPadViewController where the user will be able to finalize the registration.

The user also has an option to tap on the Resend e-mail button in case they didn't receive an email. This will result in a call to the - (IBAction)onClickResendButton:(id)sender method. Getting a new email requires the current user to be deleted and a new registration to start with the same identity. The user is deleted with an SDK call to [MPinMFA DeleteUser:] followed by an SDK call to [MPinMFA MakeNewUser: deviceName:] to create a new user with the same identity. Finally, SDK call to [MPinMFA StartRegistration: accessCode: pmi:] is made to start the new registration which will result in a new email being sent:

If mpinStatus.status has value OK this means that the registration was started successfully and the user can check their email.

The purpose of the view controller is to present UI to the user where they can enter their PIN number and then handle it. First, the user is presented with an input field where they need to enter their 4-digit PIN number:

Once the user taps on the Send button - (IBAction)onClickSendButton:(id)sender will be called to handle the PIN. The next step is determined from the value of [self.user getState].

If [self.user getState] has a value STARTED_REGISTRATION the user has started and confirmed their identity registration. They need to finalize it by calling [MPinMFA FinishRegistration: pin0: pin1:] and pass as parameters the current user instance and the desired PIN number:

If the value of mpinStatus.status is OK then SuccessfulViewController will be presented to inform the user that the registration was completed.

If [self.user getState] has a value REGISTERED this means that the user is trying to authenticate. To finish the authentication the [MPinMFA FinishAuthentication: pin: pin1:] method is called:

This view controller is presented to the user when the registration finishes. Once the user taps the Login button they will be presented with the PinPadViewController

This view controller is shown to the user just to inform them that authentication passed successfully and they are now logged in to the desired website and can go back to their browser and check: