Note: Dunnart is alpha software. It is in the process of being rewritten, and while many things work it still contains many bug and lacks key features. Use it at your own risk!

If you refer to Dunnart in your own research or publications, please cite the following reference:

The concept behind Dunnart is to use constraint-based methods to free users from manually maintaining relationships within their diagrams. These could include geometric relationships, non-overlap, object-avoiding connector routes or graph layout. In Dunnart, the user can define these features of their layout and they will be automatically maintained throughout further editing. The user can override or alter these relationships at any time.

Dunnart is a research prototype. As such, it lacks some of the features and polish of a professional diagram editor. any of the significant features of Dunnart are implemented in the open-source Adaptagrams constraint layout libraries and are described in my publications and/or PhD thesis. 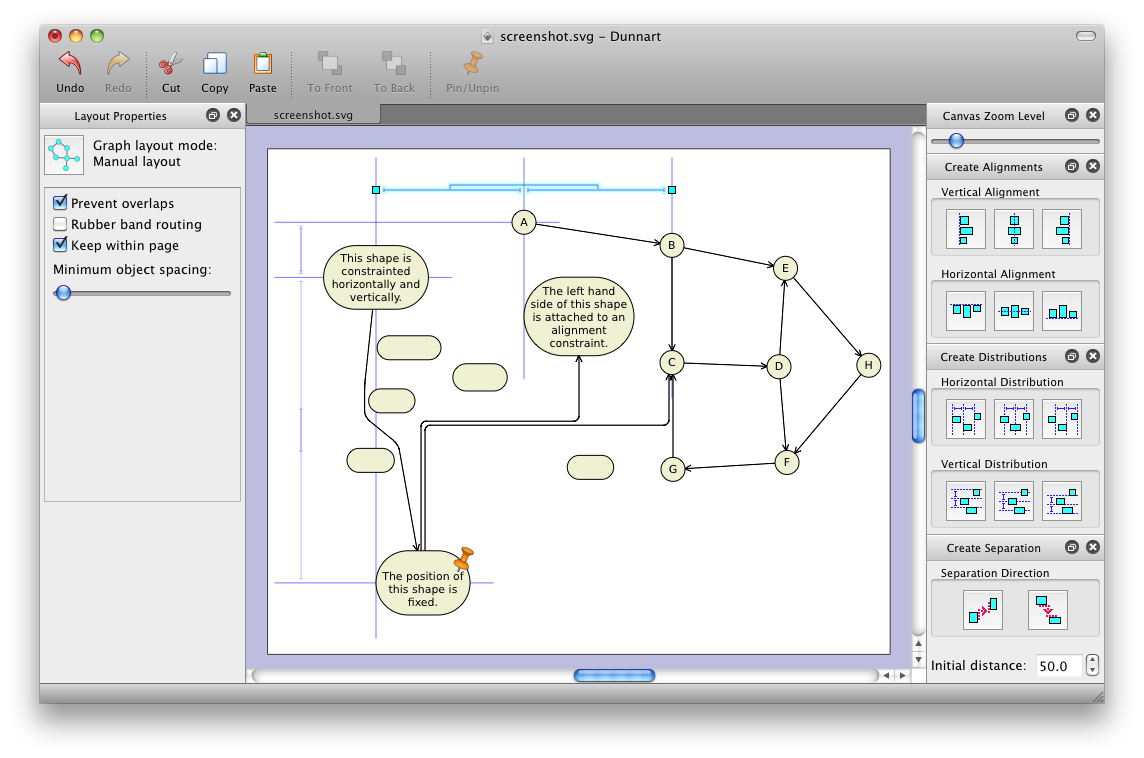 Dunnart depends only on the Qt cross-platform application and UI framework. All other components are included in the repository.
Dunnart can be built by issuing the following commands:

Dunnart is built using libdunnartcanvas, a reusable Qt-based canvas widget that extends our low level Adaptagrams constraint-based layout libraries and provides interactive constrain-based layout and placement tools. See the image below for an overview of the architecture.

Dunnart is written and maintained by Michael Wybrow. The latest version of the source code can be found here:

The Adaptagrams layout algorithms are developed by Kim Marriott and members of his Adaptive Diagrams Research Group at Monash University in Melbourne, Australia. The Adaptagrams libraries were originally written by Tim Dwyer and Michael Wybrow.

The latest Adaptagrams source code can be found in the github repository:

Dunnart and libdunnartcanvas are available as open source under the terms of the GNU GPL version 2. We are also open to dual-licensing parts of Dunnart's constraint-based layout technology for commercial use.