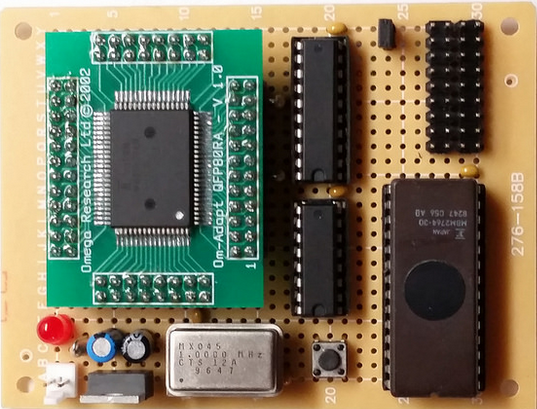 Some Fujitsu F2MC-8L microcontrollers have an external bus capability (see the catalog). I found that the external bus can be used to dump the contents of the internal ROM, which is not normally accessible.

I developed this method to extract the firmware from the Volkswagen Premium IV car radios made by Clarion. These radios contain the following microcontrollers:

I successfully extracted the internal ROM code from all of them. I've also tried samples of the above chips from other products and was able to extract the code from them as well.

The hardware setup requires the F2MC-8L microcontroller be removed from the target device. It is placed on a board with the following other components:

See the hardware/ directory for details.

A logic analyzer with 9 probes (8 data lines, 1 strobe line) is required to capture the output from the dumping hardware.

Assemble the dumping firmware in the firmware/ directory using the asf2mc8 assembler and burn it into the EPROM.

Build the hardware and power it up in external bus mode (MOD0=Vcc). It will immediately begin dumping the memory space out P30-P37 with /STROBE on P40 after each byte. It will wrap around memory and keep dumping forever. If you capture it with a logic analyzer, you'll see the string EXTERNALROM from the dumping firmware.

While power is still applied, change MOD0 to Vss. This selects the internal ROM mode. The program will continue dumping but it will now be dumping the internal ROM instead. Capture the output with a logic analyzer and let it run for a couple minutes so the entire memory space is dumped several times. Save the capture to a file.

Use the Python script under the host/ directory to split individual ROM images from the logic analyzer capture.

After a binary has been obtained, use f2mc8dasm to disassemble it.