A testing library for C.

Snow is a header-only unit testing library for C. Just include the file snow/snow.h.

IRC channel: #snow on Freenode. If you have any questions, or just want to chat, just ping me (@mort) :) 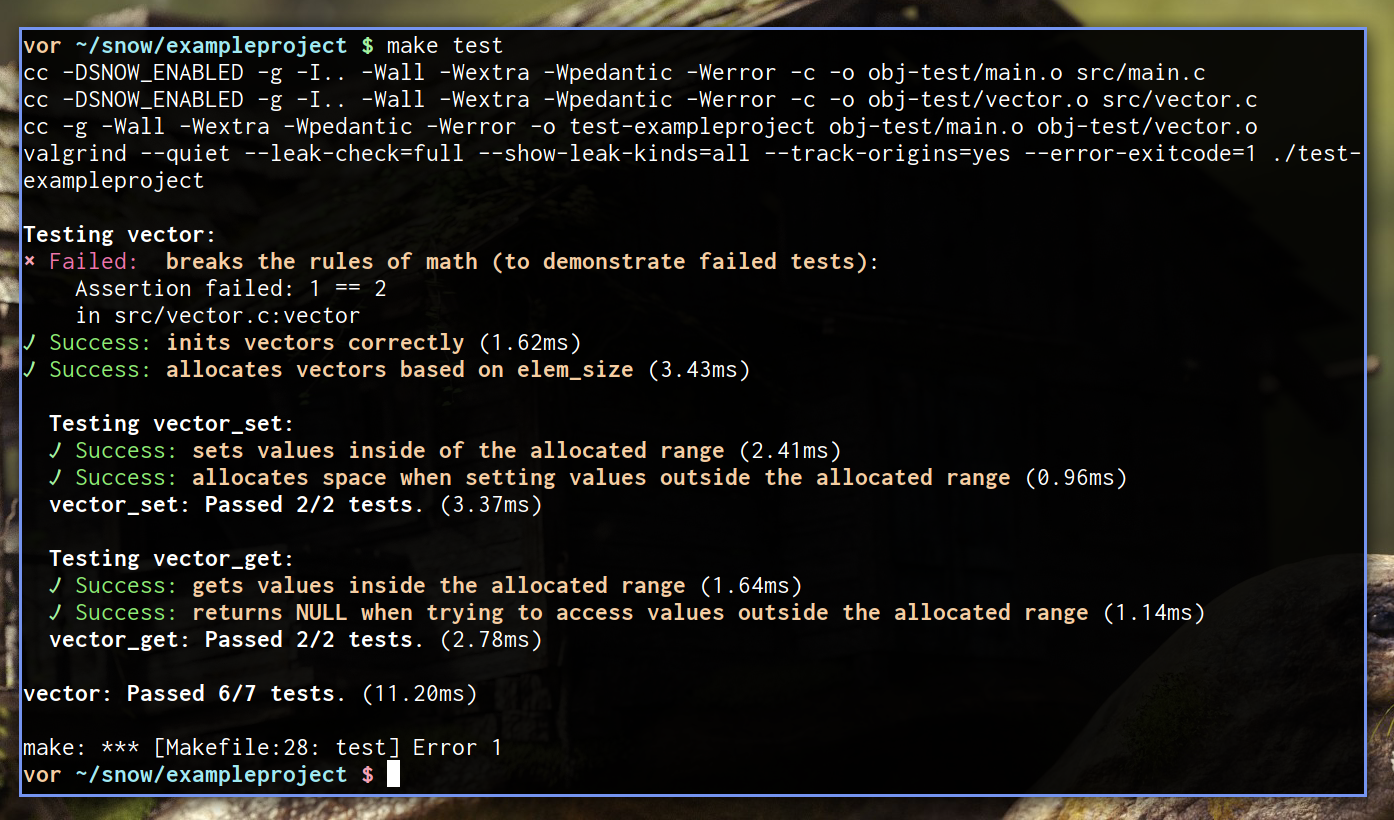 Snow 2 is a complete rewrite of Snow. Here are the highlights:

When creating the main function using the snow_main macro, your executable will take these arguments. The --no- prefixed arguments will disable the relevant function:

Here's a simple example which tests a couple of filesystem functions, and has a subdescription for testing fread-related stuff.

A top-level description of a component, which can contain subdescs and its. A describe(testname, block) will define a function void test_##testname(), which the main function created by snow_main will call automatically.

A description of a sub-component, which can contain nested subdescs and its. It's similar to describe, but doesn't define a function.

A particular test case. It can contain asserts and defers, as well as just regular code. A failing assert (or direct call to fail(...)) will mark the test as failed, but if it completes normally, it's marked as successful.

test(description) <block> is an alias, for cases where using it would read awkwardly.

defer is used for tearing down, and is inspired by Go's defer statement.

Code to run before each test case.

Code to run after each test case.

This macro expands to a main function which handless stuff like parsing arguments and freeing memory allocated by Snow. All described functions will automatically be called by the main functions.

If you want more control over the main function, you can use the snow_main_decls macro to create the necessary global variables and functions, and then call the snow_main_function(int argc, char **argv) function.

This is essentially how snow_main() works:

Just directly fail the test case. The arguments are a printf-style format, optionally followed by arguments, just like printf.

Fail if the expression x returns 0. explanation is an optional string which will be printed if the assertion fails, and can be used to provide some context.

Fail unless a equals b. If b is a string, strcmp will be used to check for equality; otherwise, == will be used.

asserteq requires C11. If you can't use C11, or want to explicitly state what type your arguments are (say you want to compare strings by pointer instead of by content), you can use the asserteq_int, asserteq_ptr, asserteq_dbl, and asserteq_str macros instead of asserteq.

Fail if a equals b. If b is a string, strcmp will be used to check for equality; otherwise, == will be used.

assertneq requires C11. If you can't use C11, or want to explicitly state what type your arguments are (say you want to compare strings by pointer instead of by content), you can use the assertneq_int, assertneq_ptr, assertneq_dbl, and asserteq_str macros instead of assertneq.

Fail unless the first n bytes of a and b are the same.

Fail if the first n bytes of a and b are the same.

Exactly how to test your code might not be as obvious with C as it is for other languages. I haven't yet used Snow for any big projects, but here's how I would do it

When testing a library's interface, you can just create a test folder which is completely decoupled from the library's source code, and just compile your test code with a flag to link against your library.

Testing a program or library internals

Testing anything that's not exposed as a library's public API is is possible because unless SNOW_ENABLED is defined, describe will just be an empty macro, and all uses of it will be removed by the preprocessor. Therfore, you can include tests directly in your C source files, and regular builds won't use snow, while builds with -DSNOW_ENABLED will be your test suite.

Since all test macros are compiled down to nothing, this will have no runtime performance or binary size impact.

Note that since snow.h defines macros with pretty general names (it, describe, assert), it's probably a good idea to put your tests at the bottom of the source and only include snow.h right above the test code, to avoid name conflicts.

The exampleproject directory is an example of a program tested this way.

A testing library for C.