Sign up
Code relating to the Coursera Bioinformatics Specialization as well as my own genetic algorithm experiment.
Find file

The headline is a bit too long for my liking but I couldn’t think of a better one. If you do, let me know.

I’ve been going through the Coursera Bioinformatics Specialization when I can. It’s been a challenge. Much time has been spent going through the forums plus searching on StackOverflow for help. Typing questions into Google is a skill.

I try and complete the challenges on my own before looking something up. Most of the challenges I run into are with different data structures. I’m still working on this.

The genetic algorithm experiment was adding a little fun to the small project I did using what I’d been learning in the Specialization to try and find out more about the ATOH1 gene. From my limited research, I found the gene may play a role in hair cell development in the ears. Why hair cells? Hair cells help to transfer sound waves from the cochlea to the brain in the form of electric signals. A lack of hair cells in the ear can lead to hearing loss.

Where did the hearing loss idea come from?

The same day I started the Specialization, I was going to event for my best friend’s son. My friend is Dave and his son is Wylder. Wylder was born deaf. The event I went to was the first day he would have his Cochlear implants turned on. I later found out these implants attempt to mimic the role of hair cells in the ear.

So to bring it all together and help my understanding and improve my programming skills, I used what I’d learned for manipulating strings of nucleotides on the sequence I’d found for the ATOH1 gene. Then I combined it with a genetic algorithm to try and mutate a random sequence of nucleotides into the right sequence.

And it worked. Well, at least the code does what I wanted it to do.

But it should be noted the code is neither biologically or scientifically sound. Consider it more of an experiment to start trying to tie together some of what I’ve been learning in the Specialization with other things I’m interested in.

Feedback and advice for future projects/improvements to this one is always welcome.

I might add more code to this as I move further through the Specialization.

PS there’s a video version of the notebook which sheds a little more light on the story above on YouTube. 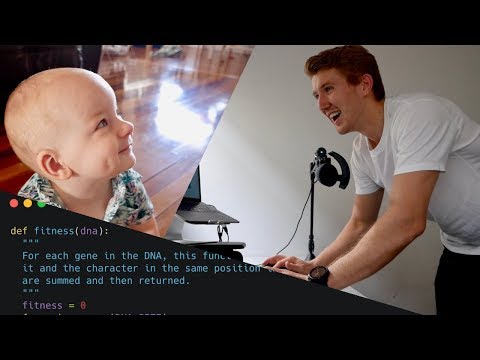