A digital media control system for museums and galleries

Nodel is an open source digital media control system for museums and galleries.

It uses a series of nodes that perform "actions" or respond to "signals" to control various devices on a network, allowing quick and easy management of digital media devices.

In short, Nodel can manage any programmable device across a wide range of platforms. Nodel is comprised of two parts - the platform and the recipes.

The platform or core system is written in Java and is the communication layer that allows nodes to interact with each other.

An active instance of the platform (aka. "nodehost") can manage any number of integrated media devices, or assistant tools (schedulers, monitors, groups) to form a coherent and manageable network of nodes.

These nodes are discoverable from other nodehosts on the same network, by which a series of user specified bindings allows the seamless propagation of remote actions and signals between a group of nodes.

Recipes are scripted in Python and are programmed to perform tasks, which might involve switching on a projector or playing a certain audio or video clip.

There are example available on the recipes repository.

The simple high-level nature of the Nodel protocol means aternative languages and environments can easily participate in the Nodel network as long as they come with a minimal set of networking functions.

A node is a self-managed, self-announcing, self-describing member of the subscription-based event-network. It's generated when a recipe sits inside the /nodes/node_name folder of a nodehost. 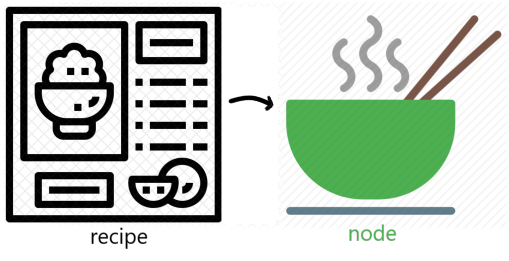 Nodes communicate with each other using a simple, open, language independent, text-based, human readable protocol written in JSON (JavaScript Object Notation) using the principles of REST (REpresentational State Transfer). Being text-based and human readable, commonly available tools such as Telnet and Notepad can be used to test and diagnose problems on a given network.

A node can run on any hardware which runs the Java Virtual Machine, which includes OS X, Windows and Linux based devices. As such, no proprietary hardware is required to install and run the system. This requires no complex and expensive infrastructure or servers to operate and allows a wide range of devices such as the cost-effective Raspberry Pi to be used in a control system design.

The platform-independent nature of Nodel also allows it to easily scale to suit your environment. Your organisation is not limited in the choice of hardware or software and the simplicity of the Nodel architecture makes it the ideal choice as a control system.

Nodel is a joint venture established between Museums Victoria and Automatic. It was imagined as a replacement for Museum Victoria’s gallery control system at the time.

You may find out more about the Nodel project on the White Paper.

A digital media control system for museums and galleries