WARNING: This framework is no longer under active development! Use GPars App Engine instead!

Hint: AppSatori Pipes are available in the Maven Central. You can simply use group: "eu.appsatori", name:"pipes", version: "0.6.0" as a dependency

Let's see a little fork-join example first. To run some operation in parallel you need to create a Node and then run fork method of the facade class Pipes.

This tells the framework to proceed to the ParallelNode node and run it in parallel. Let's say it is executed throught the parallel pipe. It up to the node to decide what to do when all the tasks are finished. You usually want to join the results and proceed to next node.

Note: Returning null has the same effect as pipe.finish() but good guys don't return null, do they?

If you want to start a new pipe aside of existing use one of run, spring, fork methods of Pipes class. They behave exactly the same as returning result of serial pipe from the node execution.

You can specify the name of the queue where is the node located by using Queue annotation. The queue must exist.

Hint: The framework is using generics extensively to check the nodes are chained properly. Use them properly to avoid class cast exceptions.

There are always four ways how can the node handle its execute method. There is always finish method to end the pipe execution too.

Run (for serial nodes) or next (for parallel nodes) calls just runs the nodes serially one by one.

It's just like one farmer is searching the single needle in the first than in the second and finally in the third haystack. 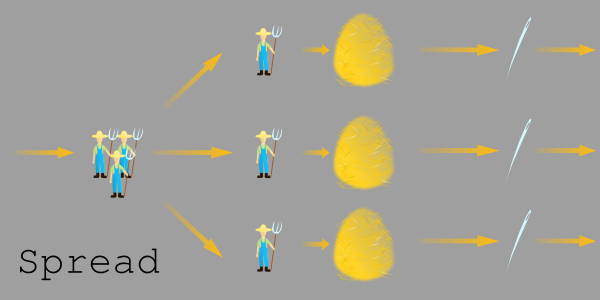 It's just like many farmers are searching many needles in many haystacks side by side but they don't care about each other. As soon as the farmer finds his needle he just go home and let his companions to continue searching.

Fork runs node in multiple parallel pipes. As soon as parallel processing is over you can join them to collects the results for the next node. 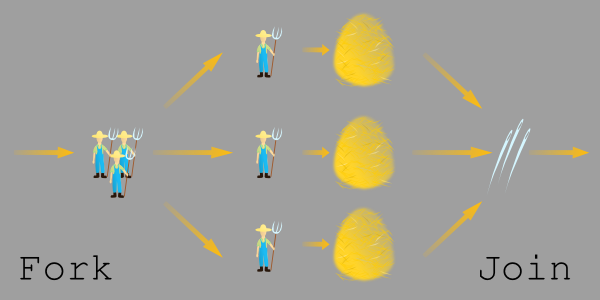 It's just like you many farmers are searching many needles in many haystacks side by side. As soon as thay finish they come together and count the needles.

Sprint runs node in multiple parallel pipes but only the result of the fastest one is send to next node. 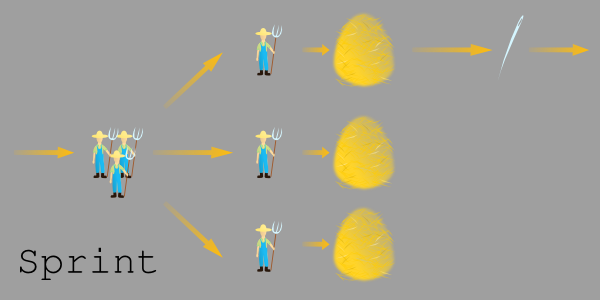 It's just like you many farmers are searching the single needle in many haystacks side by side. As soon as the first one finds it he tells his companions to stop the work.

Hint: Don't forget you have 9 hours backend hours free a day. Set up new backend in backends.xml then a queue in queue.xml with proper target set to the backend and use @Queue annotation to execute node in the queue.

Serial pipes runs directly using deffered tasks so the results are not stored into the datastore but count towards tasks quota. This applies on both serial and parallel pipes' parameters. There is one exception: if the arguments are bigger than allowed limit they are stored in the datastore.

Results of parallel pipes are stored into the datastore until the last task is finished. Datastore operations are designed to be as minimal as possible but will they still cost you some money according to billing policy. Use this framework wisely. It suites well for use cases when running the tasks serially takes very long time like tens of seconds or even minutes.

Hint: App Engine stores numbers as Longs and Doubles only. Use them directly for better performance.

As the results of the parallel pipes are stored in the datastore some problems with conversions may occur.

All objects of types which are not supported by the datastore according to [DataTypeUtils](http://code.google.com/appengine/docs/java/javadoc/com/google/appengine/api/datastore/DataTypeUtils.html#isSupportedType(java.lang.Class) are serialized as blobs. This means that they are realtivelly safe to use but their representation mustn't be greater than 1MB.

Supported object are saved to the datastore directly. This means that some coversion usually happens. Strings are particulary vunerable to 500 characters limit so the framework always convert app engine Text type to String before serving. Illegal argument exception is thrown if you try to use app engine Text type as a result of parallel execution.

Bytes, Shorts, Integers and Floats are handled properly for you by the framework. You don't need to be afraid that they are accidentaly converted to Longs and Doubles by the datastore.