An out-of-the-box Emacs configuration with super-powers 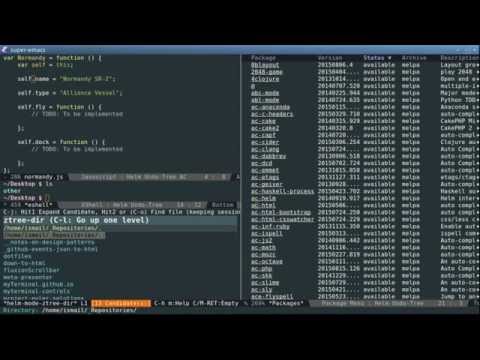 super-emacs can be used in two ways.

Getting it from GitHub is easier of the two methods. You just need to clone the repository on your local workspace like:

Then the only next step would be to make sure that .emacs.d is at the root of your home directory.

You can either place it there manually or otherwise create a soft-link from its location to the home directory.

A clear advantage of the above method would be that you can pull updates from upstream with almost no effort.

super-emacs is also available on Docker. To start it, run a command that looks like:

Refer config-key-bindings.el for all the pre-configured key-bindings for your convenience.

The presence of this package is detected for use with ispell for spell-check. Refer to the official site for instructions on how to install it on your operating system.

It could be as easy as

depending upon your operating system.

To be able to work with R Markdown files, super-emacs comes pre-configured with all the required packages except for an external dependency on R which needs to be installed on the system.

super-emacs comprises entirely of plain-text Elisp files. Not everyone has the same setup and that means that you can (and may) change these files according to your need. However, if you're the kind of person who regularly pulls updates from upstream, there's a high probability that future improvements may end up resulting in merge conflicts on your local workspace. In order to solve this problem (and according to a suggestion from @ericllazarus), the arrangement now has a redesign providing the user a way to extend their configuration without causing conflicts with future updates. One recommended way of extending super-emacs is described below.

All configuration files under .emacs.d/super-emacs with a name starting with config- can be extended by creating another file next to it with the same name but ending with a -custom.el. For example, if you plan to extend the file config-packages.el, you can create a file with the name config-packages-custom.el next to it in order to hold custom configuration. super-emacs will load the original file first followed by the custom file (if it exists) in the right order as designed and you will achieve the effect you desire. Whenever there's an update to the original file, there will be no merge conflicts and life would be so much simpler!

If you're looking for a light-weight setup, try ample-emacs.

For an even more comprehensive setup, refer to my personal configs.