Node-RED is a visual tool for wiring the Internet of Things. The Distributed Node-RED (DNR) project extends Node-RED to support flows that can be distributed between devices. DNR works with a cluster of vanilla Node-RED instances and a coordinator called DNR Editor is used to coordinate the participating Node-RED instances. 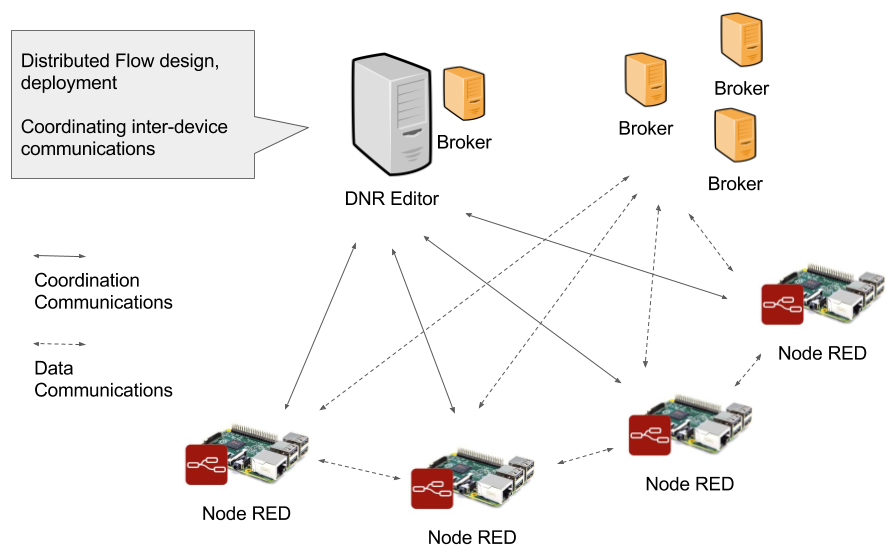 DNR Editor is a Node-RED flows editor modified to support the design of distributed flows. Once new flows are deployed, they are not started but distributed to participating Node RED instances in the cluster and deployed there.

A Node RED instance can be connected to a DNR cluster by installing node-red-contrib-dnr, a special Node RED node designed for DNR.

A sample DNR flow that runs on several Raspberry Pis and a Cloud server:

The idea of DNR:

Requirements: several Raspberry Pi (participating Node-RED, just for fun, could be multiple instances of Node-RED in a single machine); a computer to run DNR Editor (the coordinator)

UPDATE Feb 2019: a docker container has been prepared for running dnr-editor right out of the shelf:

Connect Node RED to the cluster:

After this, these connected devices can be seen on the Device Monitor on DNR Editor: GUI->Menu->DNR->Show devices 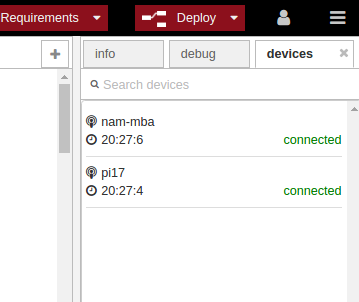 Documentation on vanilla Node-RED can be found here.

For support or questions related to DNR, please contact @mblackstock or Nam Giang at kyng@ece.ubc.ca.

For more information on the initial ideas, see these presentation, presentation and assocated paper, paper.

Node-RED is a project of the JS Foundation.

It was created by IBM Emerging Technology.

DNR Editor is an extension of Node-RED inspired by Mike Blackstock @mblackstock and created by Nam Giang kyng@ece.ubc.ca

This is a research project funded by NSERC that aims at designing a distributed application platform for the Internet of Things and Fog Computing.