Schemapper is a database-agnostic tool to visualize Rails 3.0+ schemas using D3. Schemapper does this by walking your models directly to obtain their associations, table names, and attributes. 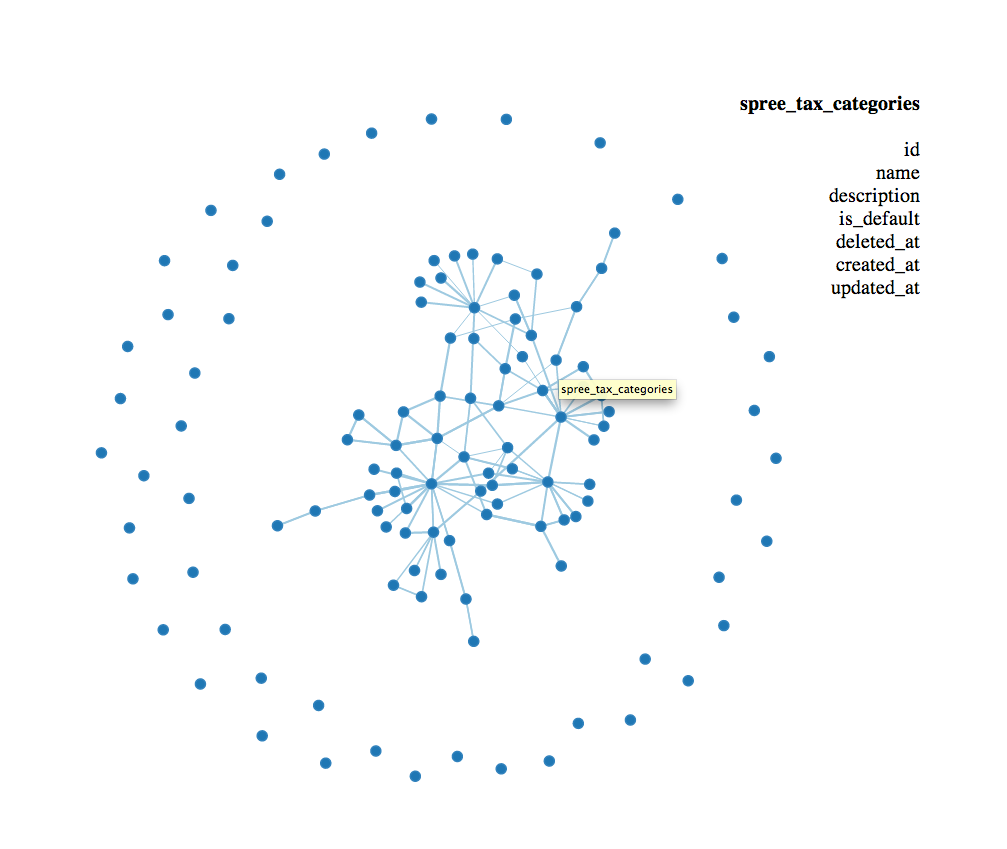 No need to add schemapper to your Gemfile. Instead, just install it:

After installing it, just run the following command from the root of your Rails app:

The code for schemapper is relatively concise, so I'll try to explain it here, which may help you debug any problems that arise.

Calling $ schemapper kicks off this file. Let's walk through it.

The script starts up in ruby, and requires some basic serialization libraries for slurping strings from STDOUT and reconstituting them into objects. Note that paths in this file typically reference paths within the folder structure of this gem. The first real line of code is:

This executes this file, and sets the output as a variable called serialized_schema. Let's checkout that file.

The first line of this file requires your project's Rails environment.

Note that unlike the previous file, paths in this file are typically referencing files from the directory you executed $ schemapper within (hopefully the root of your rails app). With this line of code, we now have access to your application.

By using ActiveRecord here, we become database agnostic, and I get away from the need to parse some schema/structure file.

The rest of this file just shapes the data into something that's readily consumable for a d3 force graph. The return of this file, will be set to the serialized_schema variable of our previous file. That return value is just a YAML-serialized ruby hash.

Back to the original file here. The very next line just turns our YAML-serialized string back into a ruby hash.

The rest of this code, which isn't much, just opens an HTML file that lives in the gem here. That HTML file loads a minified d3, and defines a few global functions in javascript, namely visualizeSchema() which constructs a d3 force graph out of the data placed into the window._schemapper variable. So the following code in our file, just injects our schema into that variable and calls render:

Then the remaining code simply creates a temporary file, writes the HTML to it, and opens it in your browser.