ARCUS is the NAVER memcached with lists, sets, maps and b+trees. http://naver.github.io/arcus

Arcus is a memcached-based cache cloud developed by NAVER Corp. arcus-memcached has been heavily modified to support functional and performance requirements of NAVER services. Arcus supports collection data structures (List, Set, B+tree) for storing/retrieving multiple values as a structured form in addition to the basic Key-Value data model of memcached.

Arcus manages multiple clusters of memcached nodes using ZooKeeper. Each cluster or cloud is identified by its service code. Think of the service code as the cloud's name. The user may add/remove memcached nodes/clouds on the fly. And, Arcus detects failed nodes and automatically removes them.

The overall architecture is shown below. The memcached node is identified by its name (IP address:port number). ZooKeeper maintains a database of memcached node names and the service code (cloud) that they belong to. ZooKeeper also maintains a list of alive nodes in each cloud (cache list). 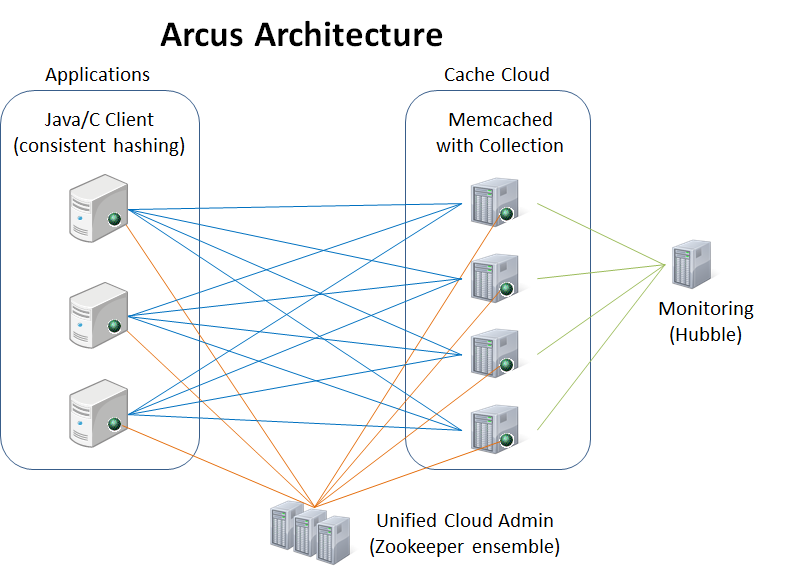 Currently, Arcus only supports 64-bit Linux. It has been tested on the following OS platforms.

If you are interested in supporting other OS platforms, please try building/running Arcus on them. And let us know of any issues.

Once you finish setting up an Arcus cache cloud on multiple machines, you can quickly test Arcus on the command line, using telnet and ASCII commands. See Arcus telnet interface. Details on Arcus ASCII commands are in Arcus ASCII protocol document.

ARCUS is the NAVER memcached with lists, sets, maps and b+trees. http://naver.github.io/arcus