A ~15 line zero dependency shell script that makes it really simple to manage your text notes.

Instead of trying to impose a whole bunch of rules and syntax requirements, this tool does its best to get out of your way.

It tries to do everything possible so that if you're working in a terminal, you can save whatever text you want into a file. This could come from typing a sentence out, pasting something from your clipboard or saving the output of a program. 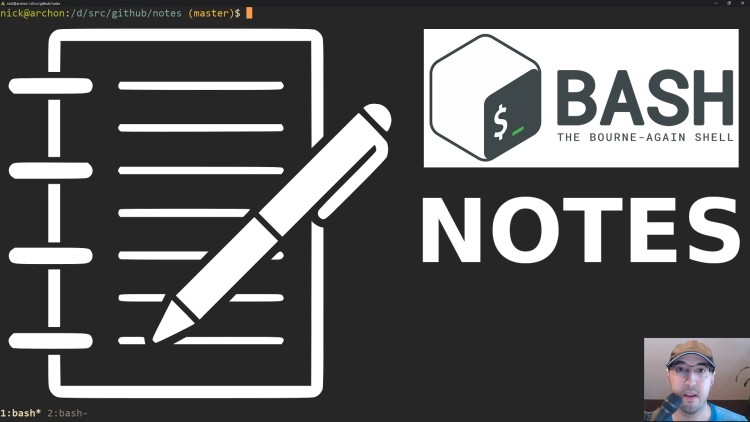 I've been keeping track of my notes in plain text files since 2001. I always felt like when it comes to jotting down notes it was always best to do everything possible to keep friction low.

That means not worrying about specific file types, formatting, tagging, check boxes, syntax rules and a bunch of other things that delay you from getting something out of your head and into a document.

Text is amazing for notes because:

Since it's unstructured text you can use this tool for whatever type of note taking you want. You can keep track of general thoughts, create a diary or make plan files similar to what John Carmack did for a number of years.

I personally use it as a scattered brain dump. Even with things being very unstructured (and even untagged) I can usually grep out anything I want within a few seconds.

Your notes are organized by auto-dated files

Let's say it's December 25th, 2019. If you were to run notes hello world it would create a 2019-12-25.txt file in your NOTES_DIRECTORY (this is something you can configure). It would then append hello world to the end of the file.

If you run notes something else that is important on the same day it would continue to append to that file.

There's other things you can do such as piping input to it, or running the script without any arguments to open the file in your configured EDITOR but let's first go over installing it before we get to that.

What is this script not good for?

Depending on how you work, it's probably not ideal for grouping up a bunch of extended thoughts about a specific topic.

For example, if you were planning to write a book and you spent 3 months gathering info about what you're writing about then you would end up with a bunch of isolated date formatted files that was mixed in with everything else.

In those cases, I recommend you make a new script called book which basically does what this script does except it always dumps everything to 1 specific file of your choosing which isn't dated. That's what I do to help plan my video courses.

Copy / paste the line below, or if you don't like this pattern of installing scripts then feel free to run things manually.

1 liner to get notes downloaded to /usr/local/bin:

There's no fancy git clone instructions because you may end up modifying at least 1 line of the script. Plus since the script is so simple, this repo is likely not going to change and if it does you will be able to diff it without any issues.

The first thing you'll want to do is configure where you want your notes to be created. This directory needs to already exist.

Also, if you want this script to open your notes in your code editor you'll want to make sure you have your EDITOR defined in your ~/.profile. This is a Unix standard. For example, mine looks like export EDITOR="vim".

There's 3 ways of using this script:

That's really all there is to it. With the above 3 ways of adding notes you'll find yourself adding all sorts of different types of notes with very little friction. I encourage you to check out just how short the source code is.

If you wanted to go all out, you could even create custom key binds in your code editor that would take the selected text and append it to your notes by running one of the above commands. Since everything is text you have a lot of flexibility!

Also, you have the power of the command line at your finger tips to manipulate these files however you see fit. For example you can run cat 2019-12-*.txt > 2019-12.txt to create a monthly file. Or better yet, if you prefer having monthly files by default instead of daily files you can just change date +%Y-%m-%d to be date +%Y-%m in the notes script for the NOTES_FILE.

I'm a self taught developer and have been freelancing for the last ~20 years. You can read about everything I've learned along the way on my site at https://nickjanetakis.com. There's hundreds of blog posts and a couple of video courses on web development and deployment topics. I also have a podcast where I talk to folks about running web apps in production.