You can run the experiment by calling train.py directly:

You will find a number of hyper-parameters in the files that you can alter directly. This is to prevent unnecessary clutter in this minimal implementation.

As proof of concept, the HalfMoon 2D dataset generated by scikit-learn is used. I generate 1000 samples with a noise level of 0.2, which ensures fast training of child networks while still requiring some non-linearity to accurately classify samples into one of the two classes. The figure below shows a few samples from the dataset. 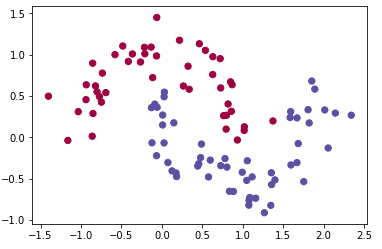 A small action space has been used. It contains the following freely mixed components: linear layers with 1, 2, 4, 8 or 16 neurons as well as the Sigmoid, Tanh, ReLU and LeakyReLU non-linear activation functions. Any generated network will have an output layer with 2 outputs for classification. The controller has been restricted to generate child networks with at most 6 hidden layers.

The controller is a single Gated Recurrent Unit (GRU) cell followed by a linear layer to produce a distribution over actions that we can sample from. The hidden state from the recurrent cell is used to encode the current state. The controller is trained with the REINFORCE policy gradient method with an added exponentially decaying entropy term to encourage exploration. Accuracy of the child network is used as reward signal during training.

Accuracy of child networks generated by the controller over the course of 5000 rollouts is displayed in the figure below. An accuracy of 91% is achieved at test time. 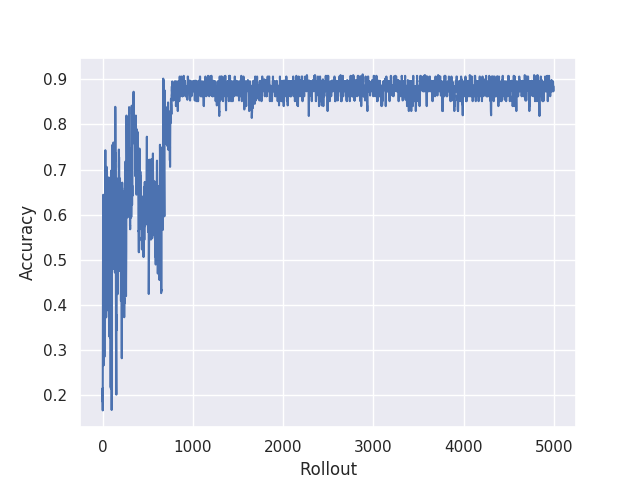 An example of a generated child network is:

where 2 is the output layer.