OpenLayers create a JSON Database of Markers for the Map

Markers4Map is an OpenSource tool developed for creating markers/icons with a info popup for the tagged geolocation on a map. The map is generated with OpenLayers and the mapping source OpenStreetMap.

The data for the markers, popups for the geolocation are stored in a JSON file and shared with others. Stored JSON data can be loaded from the WebApp Markers4Map.

The information about the markers/icons/popups is stored in link/url that can be used e.g. Wikiversity for a specific learning resource.

The WebApp Markers4Map is a AppLSAC with privacy friendly data management in the browser in mind.

Display of the markers is performend with the following package:

The JSON data has the following structure.

The init data is defined in docs/db/data.js in a Javascript file, so that the data can be loaded with a default script-tag.

Load and Save data

You can load and save data in the WebApp with the Load and Save. Saving the current work on the local harddrive as JSON file is always recommended because the processing of data is not stored on a server. Data is kept in the browser and is saved in the LocalStorage of the browser (see https://en.wikiversity.org/wiki/AppLSAC)

Browserify and Watchify are used in this repository to control the WebApp-javascript development with the required Javascript libraries installed with NPM Node.js and similar framework world that greatly improve your javascript workflow: Using them, you no longer need to micro-manage your script tags but instead you just declare the libraries each of your client-side modules is using - or you can even create your own reusable modules! Also, installing (or updating) javascript libraries is as easy as running a single command!

This is recommended because your will not install Browserfy, Watchify and UglifyJS for all your repositories separately.

If your prefer that browserify and watchify is installed with your npm install command, save these to modules to your dev-dependecies in your package.json by calling

The difference between --save and --save-dev is, that development dependencies are installed with npm install because they are required for the development process of the code but they are not added to the generated Javascript-bundle that are used in the WebApp ClassEditorUML. The --save-dev commands for browserify and watchify will install the two modules with all the the dependencies in node_modules and add the dev-dependencies to your package.json.

In the current repository Browserfy and Watchify are expected to be installed globally, because the package.json does not contain the dev-dependencies mentioned above.

Start Watching the Files with Watchify

Watchify will trigger the npm run build process if files were change due to alteration of code. To start watching the files, run the npm-watch script by npm run watch, which is defined in package.json

The main JS source file for the build process is src/main.js. The ouput library (resp. output file of build process) is stored in distrubtion library for browser based web-development in dist/bundle.js. Compressed code is generated with UglifyJS. It takes the dist/bundle.js as input file and creates the compressed file dist/bundle.min.js. 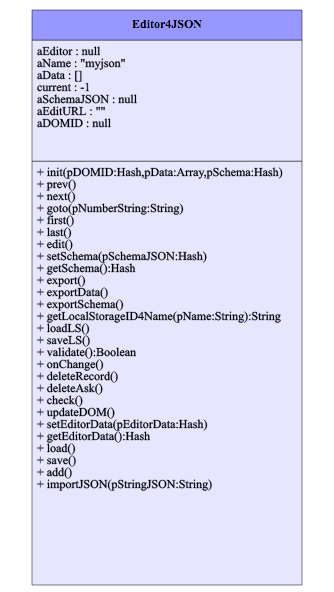 Default JSON data is defined in docs/db/data.json. If data is changes the alterations are stored in the LocalStorage locally in the browser.

The following repositories are used for data collection.

The repository openlayer_selectlocation are used to select a geolocation from an OpenLayers map.

Display Markers on the Map

The repository openlayer_display_markers to display all collected JSON records as markers with OpenLayers map.

Used the following tool that creates a JSON schema for a provided JSON file. Used the given JSON file to create the JSON Schema with JSON2schema.html.

Special thanks to the following individual developers and teams of OpenSource JavaScript projects:

OpenLayers create a JSON Database of Markers for the Map