{NK} NodeKit is the universal, open-source, embedded engine that provides a full ES5 / Node.js instance inside desktop and mobile applications for macOS, iOS, Android, and Windows.

For application developers, the backend can be written in pure Node javascript code, the front-end in the architecture of your choice including but not limited to Atom Electron API, Facebook React, Express, etc.)

{NK} NodeKit enables applications developed for Node to developed once and then run without alteration for any of the above platforms as well as in the browser.

Make sure you have Node.js installed (between v4 and v6).

(Make sure you have Xcode, Xcode command line tools and CocoaPods installed)

(WIP: Should compile but may not be fully functional. Make sure you have Android Studio installed)

Open src/nodekit.xcodeproj in Xcode. You will see 4 build targets, 2 for the frameworks (on iOS and OSX respectively) and 2 for the sample app.

Build the nodekit-Mac-sample for My Mac or the nodekit-iOS-sample for the iOS Simulator (e.g., iPhone 6) and run. All the Node.js tests should run and you should see the results as a graphical chart.

To switch to the sample app, change the package.json main entry to point to app/sample/index.js instead of test/index.js

Open src/nodekit-windows.sln in Visual Studio Community 2015 and follow the instructions equivalent to above.

Two lines in main.swift to launch an embedded WebKit view and start the NodeKit engine (already included for you in the sample).

Two lines in main.cs to launch an embedded Edge view and start the NodeKit engine (already included for you in the sample).

Then just make sure any standard Node application is in the app/ directory. This application will run in the main process (a hidden but highly performant JavaScript engine such as Nitro WKWebView, JavaScriptCore, Chakra or ChakraCore). The first thing the application typically does is open a renderer window, very similar to Atom Electron:

The sample app includes a built in web server for serving static and dynamic content; on iOS this can be an http server over a localhost port, but on OSX you may want to use no ports at all and just use built in protocol server.

Build in Xcode for both iOS and Mac targets.

Build in Visual Studio or using MBuild for all projects in the solution.

{NK} Scripting is an advanced JavaScript - Native (Swift, Objective-C, C#, C++, Visual Basic) bridge for hybrid applications. It builds upon the core platform bridges such as JavaScriptCore or ChakraCore, but abstracts the implementation details and standardizes across scripting engine families. It is the foundation of {NK} NodeKit and can be used without {NK} Electro or {NK} Core or with substitutes.

{NK} Electro is an API for {NK} NodeKit applications that facilitates application lifecycle and user interface tasks. It is inspired by the Atom Electron API, and is generally a lighter-weight but code-compatible subset. It requires {NK} Scripting but can be used without {NK} Core if you dont need all the Node features and just want a lightweight way of building universal desktop and mobile apps, a bit like Cordova but with {NK} Scripting features.

{NK} Core takes the above a step further and provides a light-weight but fully functional version of Node for {NK} NodeKit applications. It leverages the original Node source for all the Javascript components, but generally backs with different bindings to leverage each platform's built-in javascript engine(s) instead of the V8 engine. Where possible native code has been moved to Javascript. It requires {NK} Scripting and is generally paired with {NK} Electro as here, but technically you could replace {NK} Electro with your own code or plugin to open and manage the window lifecycle.

The {NK} nodekit-darwin repository contains an XCode project with all the above components (zero dependencies) that compiles to an iOS 8 + and OS X 10.9 + dynamic framework. Versions for Android are in active development.

The {NK} nodekit-windows repository contains a Visual Studio solution and a set of MSBuild projects with all the above components (zero dependencies) that compiles to Universal Windows Platform and (coming soon) .NET Framework 4.6 binaries (for WPF applications).

The framework / DLL files (containing binary code and embedded resources like the core Node.js javascript code) can just be included in any corresponding iOS, OS X or Windows applications. See the sample app for an example. You can thus compile and create your own projects; no app store consumer really needs to know how you built it unless you want to tell them or modify the {NK} NodeKit source.

Is it really Node ?

We include the direct source files from Node.js source directly in NodeKit (you can find them in the framework package in a folder called lib). Then we add our own bindings to replace the V8 native ones, writing them in javascript as much as possible, with a few native calls for the really platform specific stuff like sockets, timers, and the file system. These bindings have exactly the same API signatures as the Node versions so are plugin replacements.

This means most Node packages will work without modification. Those that require node-gyp native bindings to V8 would require an alternative.

How does it relate to Cordova, Electron, CrossWalk, XWebView and NW ?

Actually, we've built upon the shoulders of all of these and similarly on the excellent Nodelike and Nodyn projects (both no longer maintained) and even Microsoft's Node fork for ChakraCore, by taking the approach of re-writing the bindings to V8. However, we've written or re-used as much code in JavaScript as far as possible. The whole theory of the Node ecosystem is that JavaScript is pretty fast, in fact when compiled like we can with the Nitro engine used by {NK} NodeKit its really really fast. Bridging back and forth to native tends to introduce latency which we like to avoid except where essential or where done for us by the emerging HTML5 / ES5 /ES6 features of most modern JavaScript engines.

The real motivation for us however, wasn't speed of execution, but rather we didnt want to include a large 48Mb executable for Chromium or its javascript engines in every app download... when most modern operating systems already include an ES5 engine.

So on iOS and Macs we use JavaScriptCore or Nitro... on Windows we use Chakra or ChakraCore... and on Android and Linux we use Chromium/V8. Since the Node JavaScript source runs on each without patching (in some cases we add some polyfills), the only things we had to write (once per platform) were the bindings and again really just the primary four (TCP sockets, UDP sockets, timers and the file system). Others like buffers, cryptography etc., are replaced by javascript only versions (ok for those following this far, actually for cryptography we just didnt like the idea of random generator being the javascript engine variant, so we dip into the OS for just that one random bytes call for improved security, no OpenSSL dependency just native platform)

On OS X and iOS just use Safari Web Inspector to set breakpoints, inspect variables, etc. in both the JavaScriptScore and Nitro script engines (for the main process) as well as the UI and javascript environment of the renderer processes. 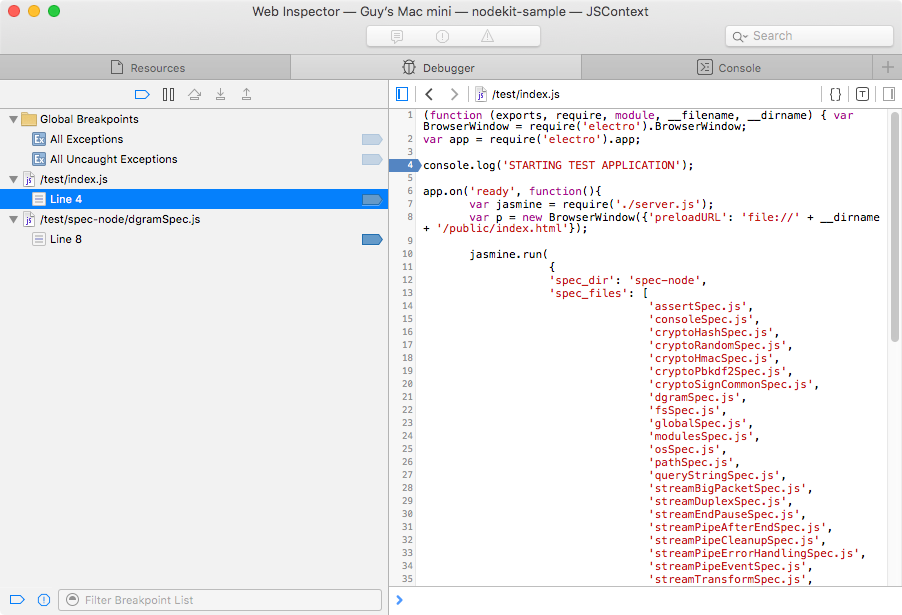 On Windows just use Visual Studio; either include a "debugger" line in your javascript file to prompty you, or use Visual Studio Attach to Process to attach to the executing app with the debugger set to Scripts. (The default for an application will be a Common Language Runtime debugger, but when using Chakra or ChakraCore you can use the built in script debugging features. If you really want, just make your application a JavaScript/HTML application and the default debugger will be as is). 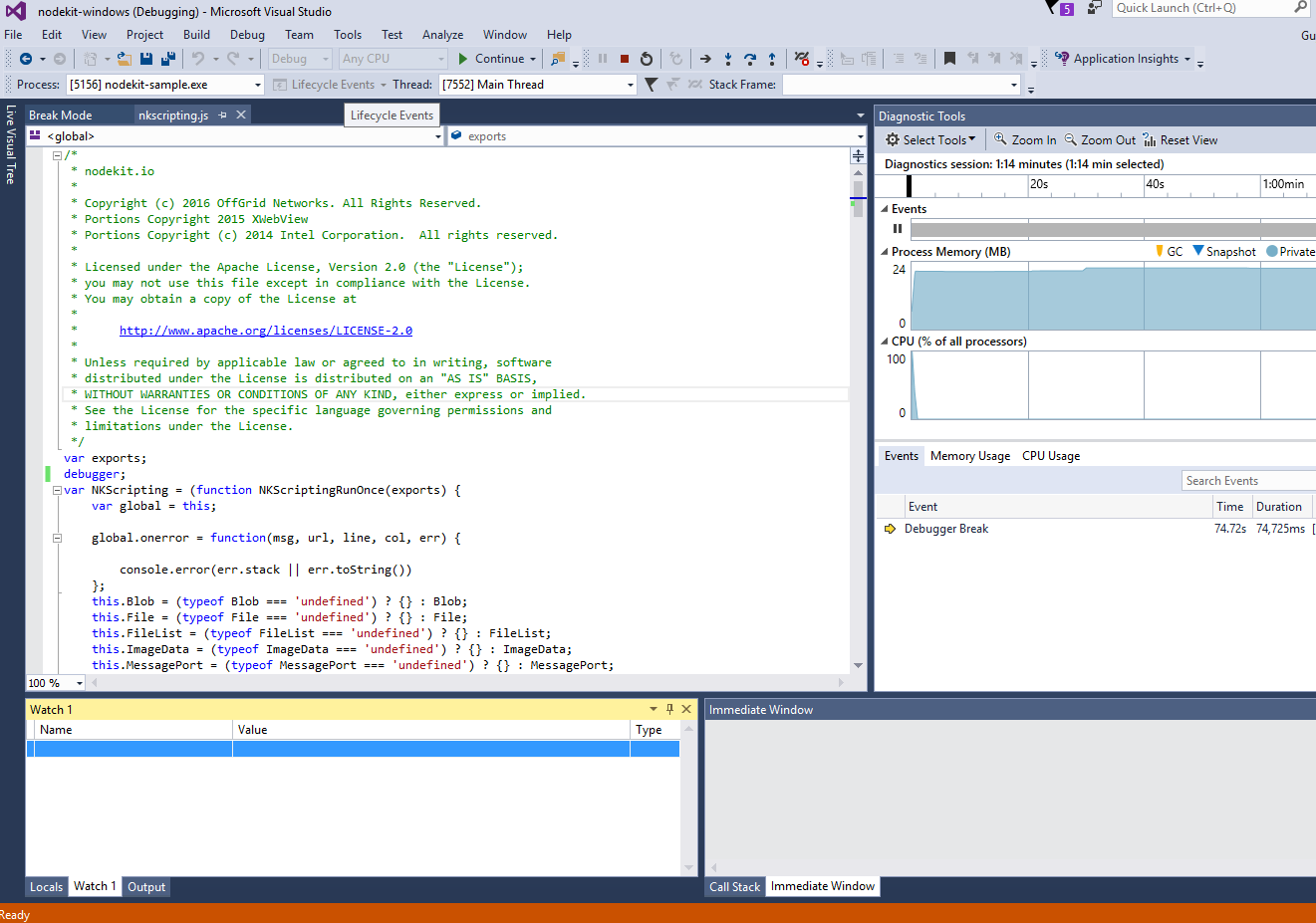 On Android just use Chrome Web Inspector to set breakpoints, inspect variables, etc. in both the JavaScriptScore and Nitro script engines (for the main process) as well as the UI and javascript environment of the renderer processes.

We went for platform specific code to allow searching by language on GitHub to show up appropriately (e.g., trending repositories in Swift, C#), to allow separate version numbers for minor platform-specific changes, and because the repositories are in essence not dependent on each other, but rather complementary language ports with the same functionality and API.

{NK} NodeKit is the universal, open-source, embedded engine that provides a full ES5 / Node.js instance inside desktop and mobile applications for macOS, iOS, Android, and Windows.