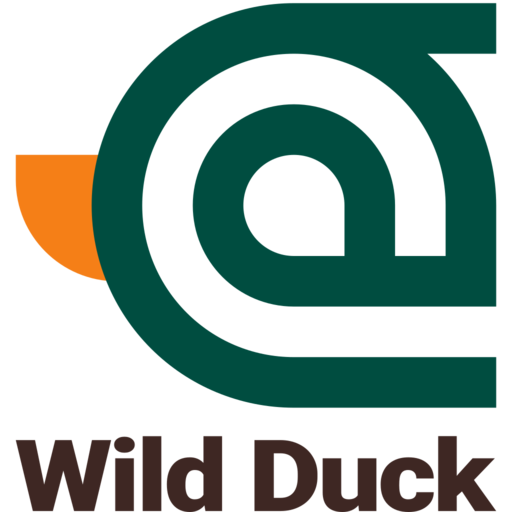 WildDuck is a scalable no-SPOF IMAP/POP3 mail server. WildDuck uses a distributed database (sharded + replicated MongoDB) as a backend for storing all data, including emails.

WildDuck tries to follow Gmail in product design. If there's a decision to be made then usually the answer is to do whatever Gmail has done.

WildDuck can be installed on any Node.js compatible platform.

Every component of the WildDuck mail server can be replicated which eliminates potential single point of failures. 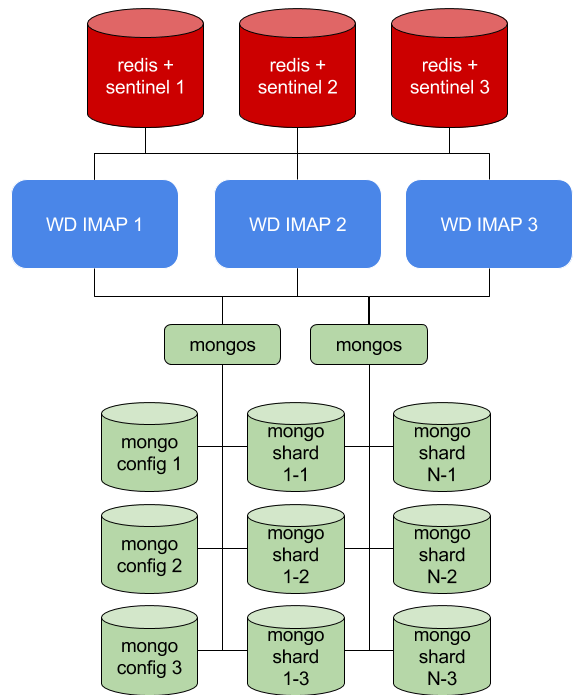 Attachment de-duplication and compression gives up to 56% of storage size reduction. 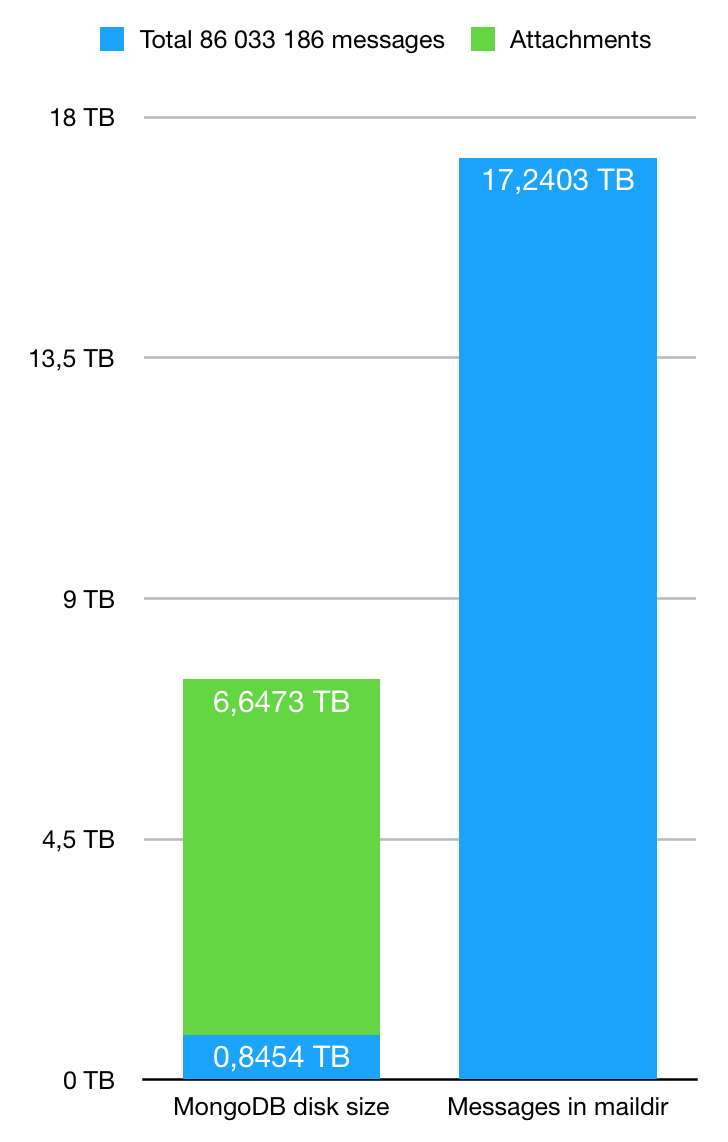 Install script installs and configures all required dependencies and services, including Let's Encrypt based certs, to run WildDuck as a mail server. 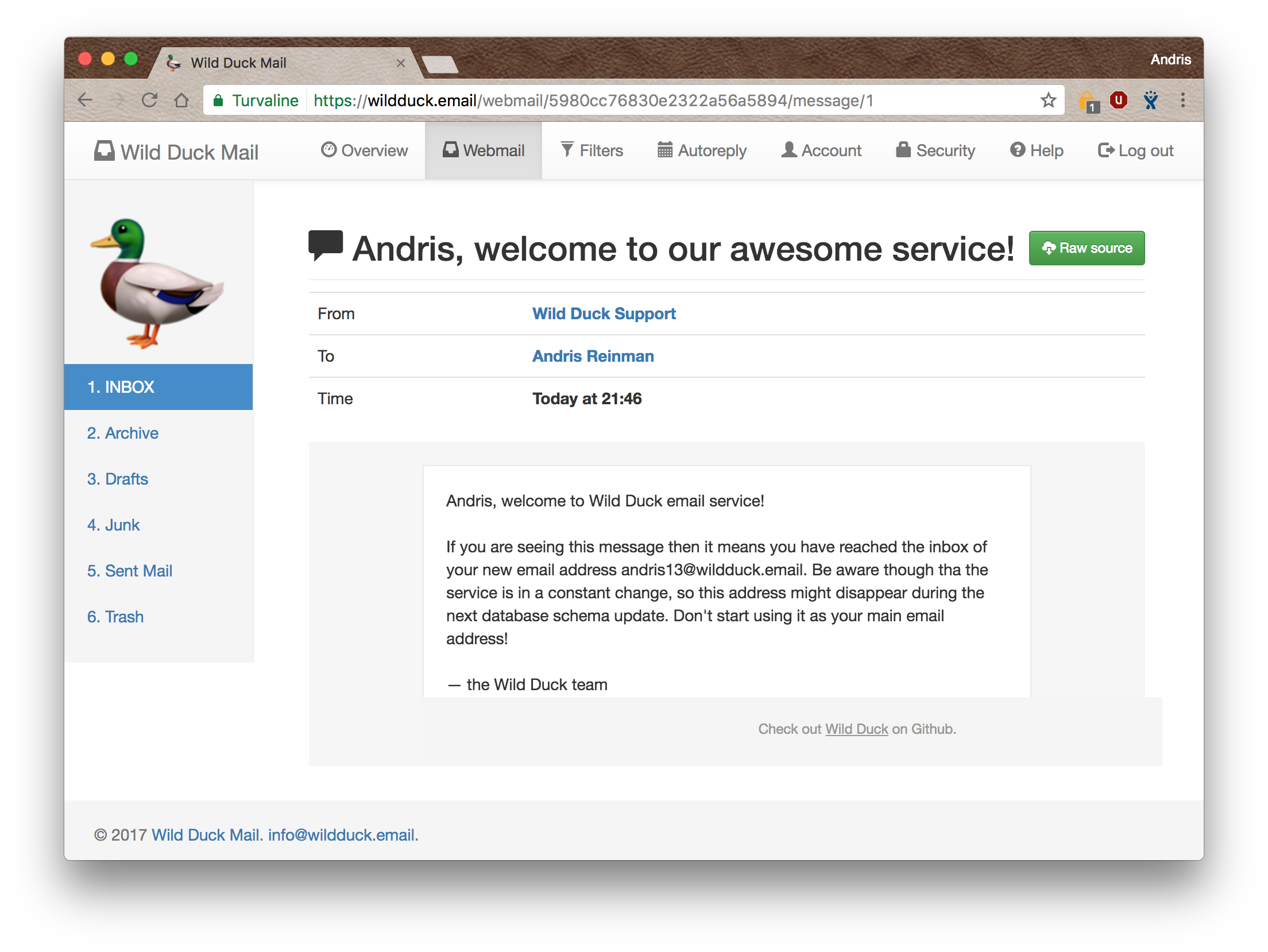 Assuming you have MongoDB and Redis running somewhere.

Step 1. Get the code from github

To use the default config file, run the following:

Or if you want to override default configuration options with your own, run the following (custom config file is merged with the default, so specify only these values that you want to change):

Any IMAP or POP3 client will do. Use the credentials from step 4. to log in.

Goals of the Project

Users, mailboxes and messages can be managed with HTTP requests against WildDuck API

Yes, it does. You can run the server and get working IMAP and POP3 servers for mail store, LMTP server for pushing messages to the mail store and HTTP API server to create new users. All handled by Node.js, MongoDB and Redis, no additional dependencies needed. Provided services can be disabled and enabled one by one so, for example you could process just IMAP in one host and LMTP in another.

How is security implemented in WildDuck?

Read about WildDuck security implementation from the Wiki

What are the killer features?

Isn't it bad to use a database as a mail store?

Yes, historically it has been considered a bad practice to store emails in a database. And for a good reason. The data model of relational databases like MySQL does not work well with tree like structures (email mime tree) or large blobs (email source).

Notice the word "relational"? In fact document stores like MongoDB work very well with emails. Document store is great for storing tree-like structures and while GridFS is not as good as "real" object storage, it is good enough for storing the raw parts of the message. Additionally there's nothing too GridFS specific, so (at least in theory) it could be replaced with any object store.

Here's a list of alternative email servers that also use a database for storing email messages:

Whenever a message is received WildDuck parses it into a tree-like structure based on the MIME tree and stores this tree to MongoDB. Attachments are removed from the tree and stored separately in GridStore. If a message needs to be loaded then WildDuck fetches the tree structure first and, if needed, loads attachments from GridStore and then compiles it back into the original RFC822 message. The result should be identical to the original messages unless the original message used unix newlines, these might be partially replaced with windows newlines.

WildDuck tries to keep minimal state for sessions (basically just a list of currently known UIDs and latest MODSEQ value) to be able to distribute sessions between different hosts. Whenever a mailbox is opened the entire message list is loaded as an array of UID values. The first UID in the array element points to the message nr. 1 in IMAP, second one points to message nr. 2 etc.

Actual update data (information about new and deleted messages, flag updates and such) is stored to a journal log and an update beacon is propagated through Redis pub/sub whenever something happens. If a session detects that there have been some changes in the current mailbox and it is possible to notify the user about it (eg. a NOOP call was made), journaled log is loaded from the database and applied to the UID array one action at a time. Once all journaled updates have applied then the result should match the latest state. If it is not possible to notify the user (eg a FETCH call was made), then journal log is not loaded and the user continues to see the old state.

WildDuck more or less passes the ImapTest Stress Testing run. Common errors that arise in the test are unknown labels (WildDuck doesn't send unsolicited FLAGS updates even though it does send unsolicited FETCH FLAGS updates) and sometimes NO for STORE (messages deleted in one session can not be updated in another).

In comparison WildDuck is slower in processing single user than Dovecot. Especially when fetching messages, which is expected as Dovecot is reading directly from filesystem while WildDuck is recomposing messages from different parts.

Raw read/write speed for a single user is usually not relevant anyway as fetching entire mailbox content is not something that happens often. WildDuck offers better parallelization through MongoDB sharding, so more users should not mean slower response times. It is also more important to offer fast synchronization speeds between clients (eg. notifications about new email and such) where WildDuck excels due to the write ahead log and the ability to push this log to clients.

In addition to the required POP3 commands (RFC1939) WildDuck supports the following extensions:

All changes to messages like deleting messages or marking messages as seen are stored in storage only in the UPDATE stage (eg. after calling QUIT). Until then the changes are preserved in memory only. This also means that if a message is downloaded but QUIT is not issued then the message does not get marked as Seen.

WildDuck uses message _id value (24 byte hex) as the unique ID. If a message is moved from one mailbox to another then it might re-appear in the listing.

WildDuck has built-in message filtering. This is somewhat similar to Sieve even though the filters are not scripts.

Filters can be managed via the WildDuck API.

This is a list of known differences from the IMAP specification. Listed differences are either intentional or are bugs that became features.

Any other differences are most probably real bugs and unintentional.

Create an email account and use your IMAP client to connect to it. To send mail to this account, run the example script:

This should "deliver" a new message to the INBOX of username@example.com by using the built-in LMTP maildrop interface. If your email client is connected then you should promptly see the new message.

This gives you an outbound SMTP server that uses WildDuck accounts for authentication. The plugin authenticates user credentials and also rewrites headers if needed (if the header From: address does not match user address or aliases then it is rewritten).

Use Haraka with haraka-plugins-wildduck to validate recipient addresses and quota usage against the WildDuck users database and to store/filter messages.

Use Rspamd plugin for Haraka in order to detect spam. WildDuck plugin detects Rspamd output and uses this information to send the message either to Inbox or Junk.

WildDuck sends gelf-formatted log messages to a Graylog server. Set log.gelf.enabled=true in config to use it. Also make sure that the same Gelf settings are set for zonemta-wildduck and haraka-plugin-wildduck in order to get consistent logs about messages throughout the system.

There is a tool to import emails from an existing maildir to WildDuck email database. See the tool here

WildDuck supports MongoDB sharding. Consider using sharding only if you know that your data storage is large enough to outgrow single replica. Some actions require scattered queries to be made that might be a hit on performance on a large cluster but most queries include the shard key by default.

Shard the following collections by these keys (assuming you keep attachments in a separate database):

Tests show that the ratio of attachment contents vs other stuff is around 1:10. This means that you can split your database between multiple disks by using smaller SSD (eg. 150GB) for message data and indexes and a larger and cheaper SATA (eg. 1TB) for attachment contents. This assumes that you use WiredTiger with storage.directoryPerDB:true and storage.wiredTiger.engineConfig.directoryForIndexes:true

Assuming that you use a database named attachments for attachment contents:

MongoDB does not complain about existing folders so you can prepare the mount before even installing MongoDB.

WildDuck is able to use Redis Sentinel instead of single Redis master for automatic failover. When using Sentinel and the Redis master fails then it might take a moment until new master is elected. Pending requests are cached during that window, so most operations should succeed eventually. You might want to test failover under load though, to see how it behaves.

Redis Sentinel failover does not guarantee consistency. WildDuck does not store critical information in Redis, so even if some data loss occurs, it should not be noticeable.

When using HAProxy you can enable PROXY protocol to get correct remote addresses in server logs. You can use the most basic round-robin based balancing as no persistent sessions against specific hosts are needed. Use TCP load balancing with no extra settings both for plaintext and TLS connections.

You can live-reload updated certificates by sending SIGHUP to the master process. This causes application configuration to be re-read from the disk. Reloading only affects only some settings, for example all TLS certificates are loaded and updated. In this case existing processes continue as is, while new ones use the updated certs.

Beware though that if configuration loading fails, then it ends with an exception. Make sure that TLS certificate files are readable for the WildDuck user.

WildDuck Mail Agent is licensed under the European Union Public License 1.1 or later.