forked from promiscuous-io/promiscuous
Replicate data across your applications http://viennot.com/synapse.pdf
Find file
This branch is 44 commits ahead, 85 commits behind promiscuous-io:master.
Pull request Compare

This repository contains the code used in the following paper: 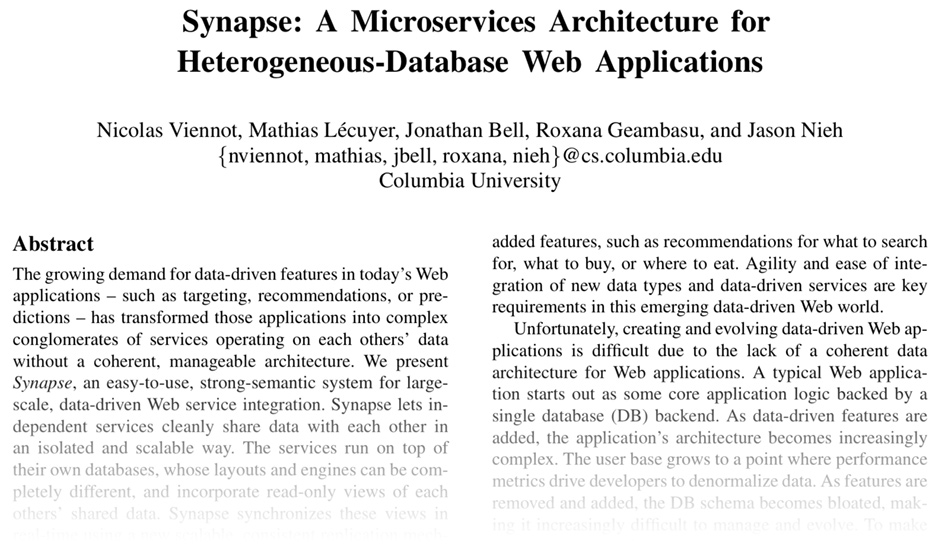 The paper can be downloaded here: http://viennot.com/synapse.pdf

The slides can be found here: http://viennot.com/synapse-slides.pdf

The slides with speaker notes can be found here: http://viennot.com/synapse-slides-notes.pdf

Synapse's behavior is specified in its test suite: ./spec/integration.

If you are curious about the publishing algorithm, most of it is in here: ./lib/promiscuous/publisher/operation/base.rb.

We need a few things for the synapse tutorial:

By including the Promiscuous publisher mixin, we can publish the model attributes:

Similarly to the publisher app, we can subscribe to the attributes:

You should start the subscriber first, otherwise the appropriate queues will not be created. From now on, you should see the queue in the RabbitMQ web admin page. Create a new user in the publisher's Rails console with:

You should see the message "Hi Yoda!" appearing in the log file of the subscriber.