a roguelike written in ruby 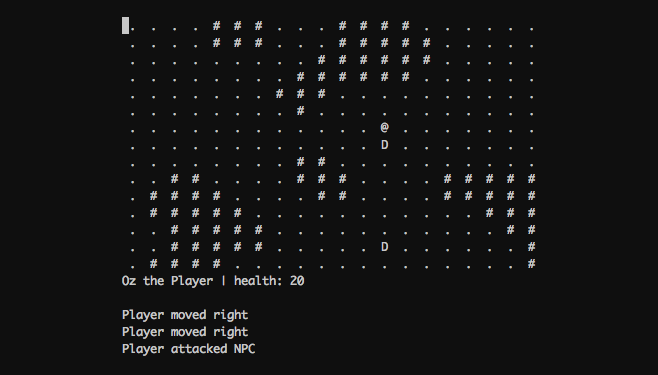 In the root directory:

Currently you can move the player around a single randomly generated map. You can attack NPCS ("D") by moving into their cells, or manually initiate attacks using "a". Careful, NPCs will fight back!

The game will end when the player dies.

Tests are written using rspec and all tests are within the spec folder. To run:

Please first read the Code of Conduct which can be found here https://github.com/oguzcanhuner/roguelike/wiki/Code-of-Conduct and ensure that all of your interactions with the project are in line with the contents.

You can find a list of todos in the issues section or suggest a feature by opening your own issue with a description of the feature that you'd like implemented.

Once you've picked an issue, indicate that you're going to work on it (by commenting on the issue). Then go through the following to set up your environment and start coding.

If you need any help with any part of this, please don't hestiate to create an issue or tweet/dm the maintainer at @oguzcanhuner. Enjoy :)

a roguelike written in ruby