Graphviz-server is a lightweight Java based HTTP server that invokes the Graphviz dot binary installed locally. You simply submit a HTTP POST with the dot graph as the request body and the server returns back a graph in SVG, PDF or PNG format. Graphviz-server uses the Graphviz Java API, a Java wrapper that invokes the dot binary using Runtime.exec.

A typical usage is demonstrated in this sequence diagram: 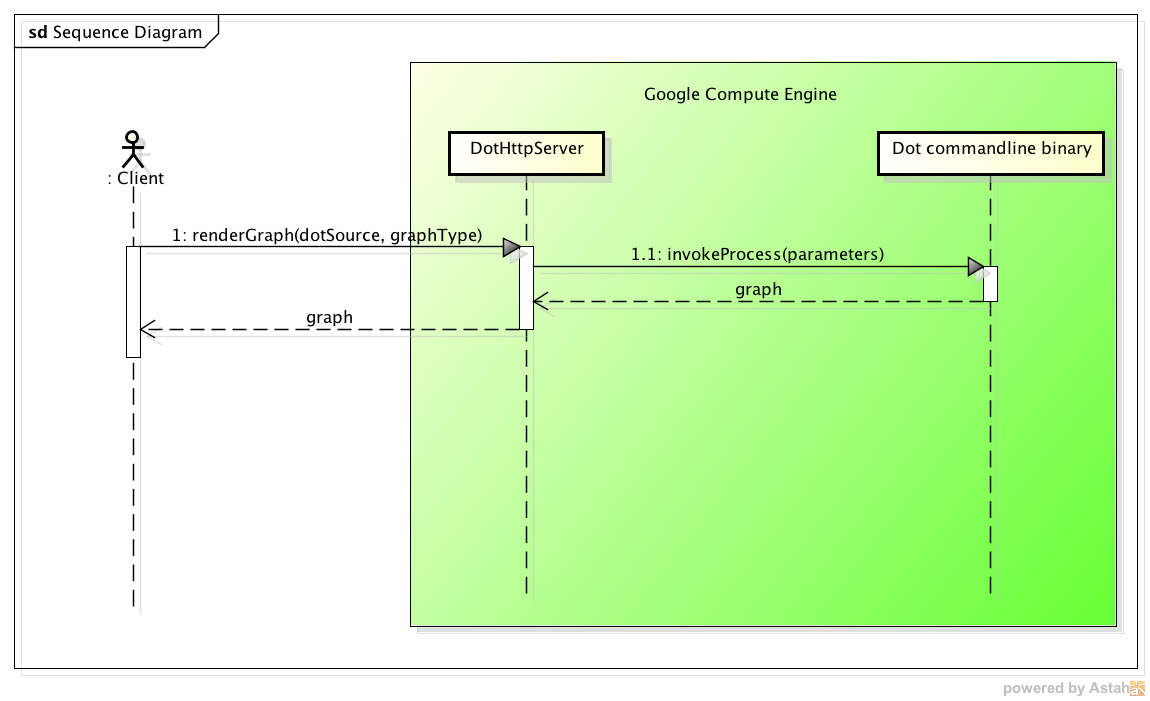 Graphviz is a powerful open source graph visualization and layout tool, unfortunately no runtime exists for Java, so the only option is to invoke the dot binary from a running Java application. This option might not be possible or practical for many reasons, for example:

In the cases mentioned above, it does make sense to setup one graphviz-server in a separate environment, and then access it from all your applications that require graphs to be generated.

Here is a demo running on Google App Engine http://dot-graphics1.appspot.com/.

The source code for the demo is here. The graphviz-server is installed on a Google Compute Engine VM (see documentation section below).

The graphviz-server uses Log4j for logging. All incoming requests are logged to DotGraphics.log, a sample output is provided here.

To use the Graphviz server simply submit a HTTP POST with the dot graph script set as the request body. Optionally an output type can be specified on the URL for example:

Note: The server will validate that the dot graph starts with digraph G {, if this is not your desired behaviour, you can remove the second check on the HttpDotGraphMessageHandler.java.

If you are using Docker and would like to run graphviz-server in a Docker container, I've created a Ubuntu Docker image. There is a Dockerfile in the source if you want to build your own image.

For more details on the implementation of graphviz-server and a detailed guide on how to set it up on Google Compute Engine VM, see this blog post: